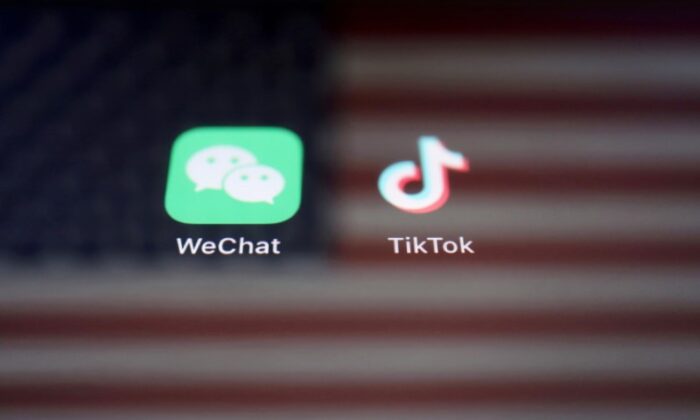 A reflection of the U.S. flag is seen on the signs of the WeChat and TikTok apps on Sept. 19, 2020. (Florence Lo/Reuters)
US-China Relations

WASHINGTON—The Commerce Department said Monday it was rescinding a list of prohibited transactions with TikTok and WeChat that were issued in September as the Trump administration sought to block new U.S. downloads of both Chinese-owned apps.

The withdrawals came after President Joe Biden earlier this month withdrew a series of Trump-era executive orders that sought to ban new downloads of Tencent-owned WeChat and TikTok, and ordered a Commerce Department review of security concerns posed by those apps and others.

The Biden order directed the Commerce Department to monitor software applications like TikTok that could affect U.S. national security, as well as to make recommendations within 120 days to protect U.S. data acquired or accessible by companies controlled by foreign adversaries.

WeChat is a popular social media and messaging app developed by Chinese technology giant Tencent Holdings. Evidence shows that WeChat is a tool of censorship, monitoring, and suppression wielded by the Chinese Communist Party (CCP).

Biden’s executive order revokes the WeChat and TikTok orders Trump issued in August, along with another in January that targeted eight other communications and financial technology software applications.

The January Trump order directed officials to ban transactions with eight Chinese apps, including Ant Group’s Alipay and Tencent’s QQ Wallet and WeChat pay. No bans have been issued to date.

The Trump administration had appealed judicial orders blocking the bans on TikTok and WeChat, but after Biden took office in January, the U.S. Justice Department asked to pause the appeals.