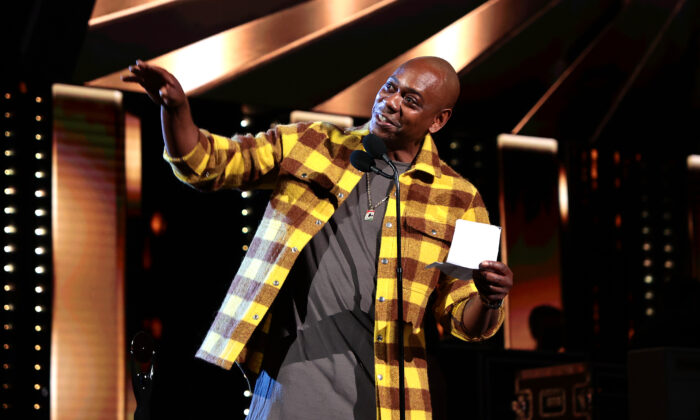 Comedian Dave Chappelle was attacked while performing on stage at the Hollywood Bowl in Los Angeles on May 3, according to police and footage shared on social media.

A man armed with a replica gun that could eject a knife blade rushed the stage at around 10:45 p.m. and lunged at Chappelle while the comedian was in the middle of his set, according to law enforcement sources cited by local outlets.

A spokesperson from the Los Angeles Police Department (LAPD) told NBC Los Angeles that the assailant was detained by security staffers and was taken to the hospital with “superficial injuries.”

The LAPD said it was unclear if the attacker tried to use the weapon.

Video shared on social media showed a person climbing onto the stage and attempting to tackle Chappelle, while another appeared to show the aftermath of the incident with people surrounding the perpetrator.

Another video showed a man being loaded onto a stretcher with what appeared to be a dislocated or a broken arm.

Police cited by NBC Los Angeles said Chappelle was uninjured in the incident.

Actor Jamie Foxx, who was watching the show, ran on stage to help restrain the assailant, according to reports.

Chappelle later thanked Foxx, with footage following the incident showing Chappelle saying,”Make some noise for Foxx. Whenever you’re in trouble, Jamie Foxx will show up in a sheriff’s hat.”

Foxx, who came on stage, joked, “I thought that was part of the show.”

Comedian Chris Rock, who also attended the event, also came on stage and joked, “Was that Will Smith?” in apparent reference to Smith slapping Rock during an Oscar awards ceremony over a joke about Smith’s wife.

Chappelle was performing at the “Netflix is a Joke” comedy festival, which runs until Sunday.

The Epoch Times has reached out to Chappelle’s publicist with a request for comment on the incident.