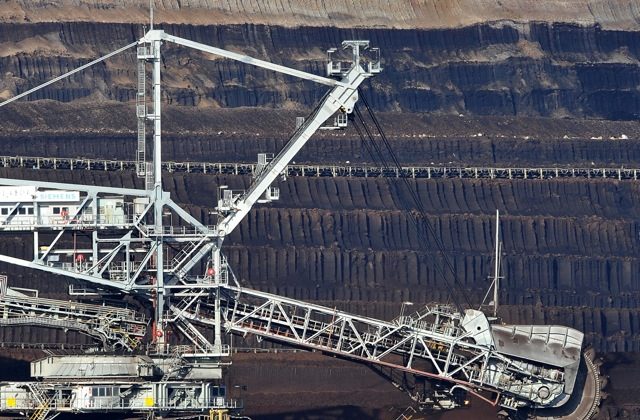 A coal dredger tears coal from the face of the Loy Yang Open Cut coal mine in the Latrobe Valley, Victoria, Australia, on Aug.13, 2009. (Paul Crock/AFP/Getty Images)
Australia

The Liberal-National coalition party has promised to generate 450,000 new jobs in regional Australia in the next five years as part of its election campaign.

Prime Minister Scott Morrison, from the centre-right Liberal Party, said on April 27 the additional jobs were part of the total 1.3 million jobs the Coalition already pledged to deliver.

“Only the Coalition has a plan for 450,000 new jobs in the regions and runs on the board to deliver them,” he said.

“Since we were elected, we have created over 1.9 million new jobs, and our unemployment rate is down to four percent, the equal lowest level in 48 years, and forecast to fall further.”

Meanwhile, Deputy Prime Minister Barnaby Joyce, from the Nationals Party, which traditionally represents regional areas, said that the Energy Security and Regional Development plan proposed by the Coalition would drive up regional income and create more jobs in the upcoming years.

“All they have is a track record of increasing unemployment in regional Australia,” he said.

Meanwhile, new data from the Australian Bureau of Statistics shows that the annual inflation rate has leapt to 5.1 percent, the highest level since 2001.

To ease the burden of growing living costs, the government will from April 27 provide six million pensioners, carers, veterans, and welfare recipients with a one-off $250 (US$179) payment.

The support payments totalling $1.5 billion were included in the cost of living package in the 2022-2023 federal budget.

Frydenberg said the support was the federal government’s targeted response to alleviate living cost pressures caused by global issues, including the COVID-19 pandemic and the Russia-Ukraine war.

“Labor has no plans to help families with cost of living pressures,” he said.

Meanwhile, Labor’s shadow treasurer, Jim Chalmers, said that everything but wages was going up under the incumbent Morrison government, and higher interest rates were going to hurt Australians.

“A better future relies on a stronger, broader, more inclusive, and more sustainable economy—powered by cleaner and cheaper energy, a bigger and better-trained workforce, and key investments in the care economy, digital economy, and a future made in Australia,” he said.

Speaking to reporters on April 27, Labor MPs criticised the government’s handling of the budget, citing inflation and debt, and said the opposition would do a better job. However, they did not provide detail on the costings for all of their proposals.

Labor also continued its criticism of the Coalition government’s dealing with Pacific countries, especially after the Solomon Islands signed a security pact with China.

On April 26, the party announced a “whole of government effort” Pacific strategy, which included millions of dollars in additional support for the region to ensure the position of Australia as “the first partner of choice” for Pacific countries and counter Chinese interference efforts.