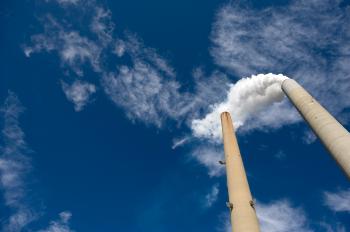 The smoke stacks of a coal power plant in New Haven, West Virginia, on Oct. 30, 2009. (Saul Loeb/AFP/Getty Images)
US

Conan Milner
writer
Conan Milner is a health reporter for the Epoch Times. He graduated from Wayne State University with a Bachelor of Fine Arts and is a member of the American Herbalist Guild.
View profile
Follow
biggersmaller
Print
The process of generating energy from coal requires a staggering amount of water. Out of the 410 billion gallons drawn from US waterways everyday for a variety of the nation’s water needs, according to the US Geological Survey (USGS), half of it goes to cooling power plants, which are largely coal fired.

Circle of Blue, an international network of journalists and scientists that examines global water use, recently published some alarming statistics about coal power and its relationship to water.

A Circle of Blue illustration based on findings from the USGS detailing the effects of coal on water resources in the United States reveals that 55 to 75 trillion gallons of water are needed annually to support the 1 billion tons of coal the nation uses each year. That amount is roughly the equivalent of all the water that passes over Niagara Falls in five months.

Although experts suggest that, based on current trends, water consumption for energy production will increase dramatically in the coming years, this insatiable appetite cannot be supported forever. A report from the U.S. Department of Energy’s National Energy Technology Laboratory reveals that the major drought of 2007 in the southeastern United States brought power-plant water use to the limit.

In the April 2009 report, researchers describe how the drought dried up rivers, lakes, and reservoirs in the region, forcing area power plants to dramatically reduce production or shut down entirely.

“The problem for power plants becomes acute when river, lake, or reservoir water levels fall near or below the level of the water intakes used for drawing water for cooling. A related problem occurs when the temperature of the surface water increases to the point where the water can no longer be used for cooling.

“In this case, the concern is with discharge of heated water used for cooling back into waterways that are just too warm to keep temperatures at levels required to meet state water quality standards,” the report explains.

The same fate has hit power plants in Tennessee, Illinois, Minnesota, and even France in recent years. Due to a lack of water, power plants were forced to shut down.

While water for cooling is necessary for other energy sources, the process for extracting coal requires additional gallons. Researchers at Virginia Tech estimated that mining companies use between 800 to 3,000 gallons of water to extract and process a single short ton of coal.

These daunting figures do not include the impact of pollution from the coal industry on the nation’s waterways.

Circle of Blue notes that although legislation such as the Clean Water Act and the Surface Mining Control and Reclamation Act have helped to limit overuse of freshwater in the United States, the laws are not enforced strictly enough to stop coal industry pollution.