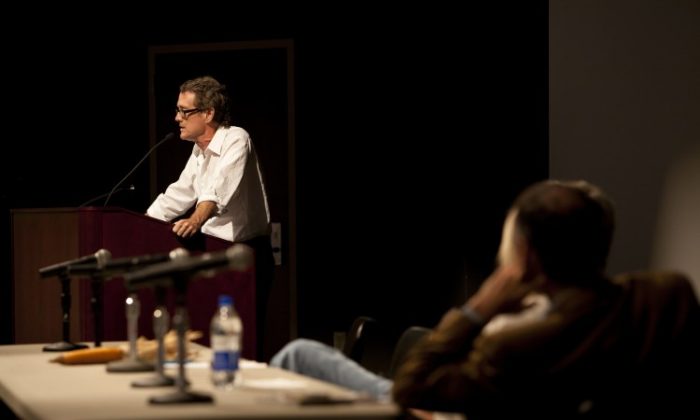 Dr. Robin Bernhoft, M.D., medical director of the Bernhoft Center for Advanced Medicine, opens an educational forum, titled, "It's In Your Food: GMO—Your Right to Know," about health risks of genetically engineered food on Oct. 8, 2012, at the Ventura College Performing Arts Center, Calif., sponsored by the college's Health Education Department. (Joe Wesselman)
US

Genetically engineered foods, or genetically modified organisms (GMOs), have been approved as safe in the United States since the early 1990s, but more than 20 years later, many doctors are questioning that stance.

One such physician is Dr. Robin Bernhoft. A former liver and pancreatic surgeon, the Harvard-trained doctor is now director of the Bernhoft Center for Advanced Medicine in Ojai, Calif. Over the past few years, he has found that patient health improves when GMOs are removed from their diet.

The claim is controversial—the U.S. Food and Drug Administration (FDA) insists that GMO foods are no different than those found in nature, but Dr. Bernhoft’s observations are not uncommon.

According to author, filmmaker, and fierce biotech industry critic Jeffrey Smith, thousands of doctors across the country have drawn similar conclusions.

“It is a force that cannot be properly stopped by the biotech industry because the people who avoid GMOs are getting better,” Smith said. “The stories are getting out, and the experience and the viral capacity of this information is enormous.”

Dr. Bernhoft described a wide range of diseases that have shown improvement after implementing non-GMO diets. He said that the symptoms he sees in his patients mirror those observed in animal studies.

“In all of the animal studies that I’ve read, there’s always damage to gut integrity,” Dr. Bernhoft said. “Is the same thing happening in humans? I don’t know, but asthma, food allergies, autoimmunity—all of those things have gone up logarithmically since GMOs have been introduced.”

Dr. Michelle Perro, pediatrician at the Institute for Health and Healing in San Francisco, said that she has also observed many cases of sick children getting better when they stop eating GMOs.

“In my opinion, it’s an epidemic,” Dr. Perro said. “We are a living science experiment.”

Dr. Perro has been treating children for over 30 years, but she said that recently something has changed. Over the last decade, she has witnessed a marked increase in the number of children with chronic disease—digestive issues, profound food allergies, increased immunological disorders, inflammatory bowel disease, and more.

Both Dr. Perro and Dr. Bernhoft admit that there are a variety of environmental and dietary factors contributing to modern illness, but they also point to an alarming trend that correlates closely to the rise in GMO consumption.

For example, Dr. Bernhoft referred to allergy rates in Great Britain in 1997—the same year that GMO soy was introduced there. Back then, soy ranked number 37 on the list of most common food allergies. The following year it jumped to number 9, and the year after that it ranked as the nation’s third most common food allergy.

“Can I say definitively that GMOs have caused this? Of course I can’t. I don’t have the studies,” said Dr. Perro. “Can I say I’m extremely suspicious? Yes. And because I practice the precautionary principle, I think this has to be halted until it is looked at. We have to protect our children—not give it to them and see what happens.”

Cautious doctors received support for their suspicions in a recently published study from France. Led by biologist Gilles-Eric Séralini, the two-year trial observed a startling outcome: rats who ate GMO corn saw four times the number of deaths and an 80 percent increase in cancer compared to those that were fed a diet of conventional corn.

The study made big headlines in Europe, and it has led to bigger changes in policy. After the Séralini study was released, Russia banned GMO foods, and other countries have also discussed backing away.

In the United States, however, the research received little press, other than statements to discredit the study and shame those who point to it as proof.

“When they said [the study] was flawed, they just threw everything out there that they could to discredit Séralini,” explained Dr. Perro. “They said he used the wrong rats; Séralini used the same rats Monsanto did. They said his sample was too small; he used the same number of rats that Monsanto did. He studied the rats for two years, and he only saw abnormalities after four months.”

U.S. regulators have largely dismissed Séralini’s results, but Smith, Dr. Perro, and Dr. Bernhoft all said that Séralini is far from the first scientist to have found problems. They point to Arpad Pusztai and other researchers that were once held in high regard, until they happened upon evidence that pointed to dangers in GMOs.

“[Séralini] is a reputable professor at Caen University. He has nothing at stake here,” said Dr. Perro.

On the other hand, the biotech industry has a lot at stake, and they are paying a lot of money to protect themselves. The industry’s effort to squash Proposition 37—a California ballot initiative that would make the state the first in the nation to require labeling on GMO foods—has spent nearly $40 million to convince voters that the measure is misleading and would only cause problems.

Of course, the biotech industry has doctor support, too. The physician featured in the anti-Prop 37 advertisements is Dr. Henry Miller, who previously condemned claims that cigarette smoke was responsible for increases in cancer and heart problems. A former FDA commissioner, Dr. Miller speaks glowingly of GMO safety and promise.

“The safety record of genetically engineered plants and foods derived from them is extraordinary,” Dr. Miller wrote in a recent article published in Forbes magazine. “Even after the cultivation worldwide of more than 3 billion acres of genetically engineered crops (by more than 14 million farmers) and the consumption of more than 3 trillion servings of food by inhabitants of North America alone, there has not been a single ecosystem disrupted or a single confirmed adverse reaction.”

However, many physicians do not share Dr. Miller’s GMO enthusiasm.

“The only thing that GMOs have been shown to do is that they can be sprayed with pesticides without dying,” Dr. Perro said. “It does nothing for nutritional value. It does not increase crop yield. It does not feed the hungry. And you have to ask, why are we eating it? Why should we give this to children?”

Dr. Perro’s views go beyond labeling—she wants GMOs banned until more independent research can be done, “as there are just too many doubts in too many people’s minds.”

“We’ve got plenty of clinical data. That alone should be reason to stop it,” she continued. “We have plenty of people who have only eaten GMO foods. Let’s look at their guts. We could design a study. It’s easy enough to do.”

In light of similar doubts and concerns, India is also considering a moratorium on GMOs. Thousands of livestock have reportedly died from eating Monsanto’s Bt cotton, field workers have developed strange illnesses, and a rash of farmer suicides associated with the new crops have plagued the country.

From the evaluation of studies to the presentation of facts, those for and those against GMO foods could not be more polarized. Amid so much confusion, many doctors still have reservations.

Dr. Perro said that her colleagues have noticed the astronomical rise in disease rates, but they have a difficult time correlating it to GMOs because it conjures an unthinkable conclusion.

“That’s what you have to wrap your brain around,” she said. “That a company would suppress knowledge that this is bad for our health to make a profit.”