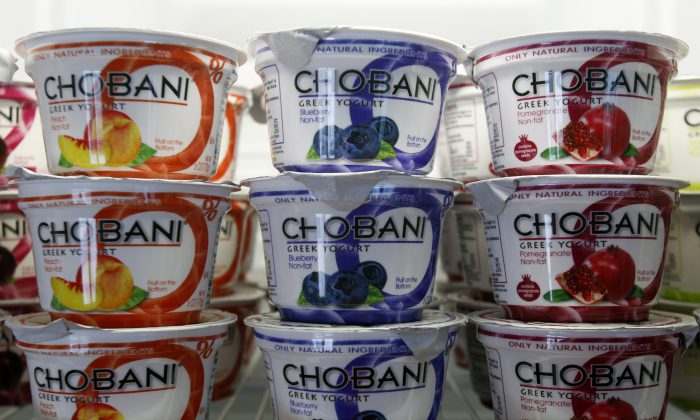 Chobani is doing its best to take the high road after a court ordered the company to stop its ad campaign that involved throwing its competitors’ products into containers that looked a lot like trash bins.

In its national television campaign for Simply 100-Calorie Greek Yogurt, actors try the other yogurt brands and find them disgusting due to the fact they contain a food additive. A disparaging statement is then made about the food additive, which the court has now said is likely a “false comparative advertisement” under federal law.

With more Americans saying natural ingredients are important to them, marketers are increasingly experimenting with how to appropriately highlight this fact.

“The conversation about how food is made in our country is just beginning,” Chobani tweeted soon after the court order, along with a statement and hashtag #NoBadStuff.

The New York-based Greek yogurt maker got into legal trouble after it disparaged the artificial ingredients used by its largest competitors Dannon and Yoplait. The ads contrasted the other yogurt with Chobani’s yogurt, which does not contain “a trace of any artificial sweeteners or artificial preservatives.”

With more Americans saying natural ingredients are important to them, marketers are increasingly experimenting with how to appropriately highlight this fact about their products. Often this involves some form of comparison. This case shows that brand managers will need to exercise caution in how they proceed.

Just last week, General Mills launched its first national ad campaign for Larabar, which highlights the fact that Larabar is made from fruits, nuts, and spices, or rather “real food.”

In holding up Larabar as the better choice, the ads contrast Larabar with generic boxes in the grocery store. These boxes, we are told, are filled with food dyes, syrups, preservatives—and “ticky tacky,” a meaningless term that evokes in the imagination all kinds of bad stuff.

For General Mills, which sells hundreds of products with food additives, the campaign was a risk, but of course it did not call out any of those products by name. That is where Chobani crossed a line.

Yogurt Has Its Day in Court

The court separately granted both requests in favor of the plaintiffs on Jan. 29, finding that Chobani’s ads were likely in violation of federal law that protects companies from advertisements that are false, misleading, disparaging, or deceptive.

“General Mills supports fair and vigorous competition between companies, but false advertising only misleads and harms consumers,” said Mike Siemienas, a spokesman for General Mills, in a statement after the court ruling, according to AdAge.

“We have always used only safe ingredients to make a wide variety of yogurts that are enjoyed every day by millions of people. … We take all attacks on the reputation of our Light & Fit products as well as our brand seriously, and will work to ensure our competitors are truthful and not misleading in their advertising,” said Michael Neuwirth, a spokesman for Dannon, also published by AdAge.

In one of the commercials, Chobani singled out Dannon Light & Fit Greek for containing sucralose as a sweetener, telling people ominously that sucralose has chlorine added to it.

The veracity of the statement is not in question. However, sucralose is FDA-approved for human consumption, and it is the main ingredient in the popular sweetener Splenda.

Chobani also said that Yoplait Greek 100 contains potassium sorbate as a preservative, which is a chemical that is used to kill bugs.

The court disagreed with Chobani’s assertion that the safety of sucralose and potassium sorbate for human consumption is still the subject of legitimate scientific debate.

“To the contrary,” the court ruling stated, “the balance of record evidence reflects that potassium sorbate is a well-studied compound repeatedly determined to be safe for a variety of uses.”

General Mills and Dannon had argued to the court they suffered substantial injury from Chobani’s Simply 100 advertising campaign, including loss of sales, market share, and goodwill.

The court agreed with the plaintiffs, granting the preliminary injunction on the basis that General Mills and Dannon would be likely to prevail on a false advertising claim under the federal Lanham Act.

To Chobani, the court said it “is free to continue to spread its message about the value of selecting natural ingredients.”

“It is not, however, free to disseminate the false message that potassium sorbate renders Yoplait Greek 100 unsafe to consume.”