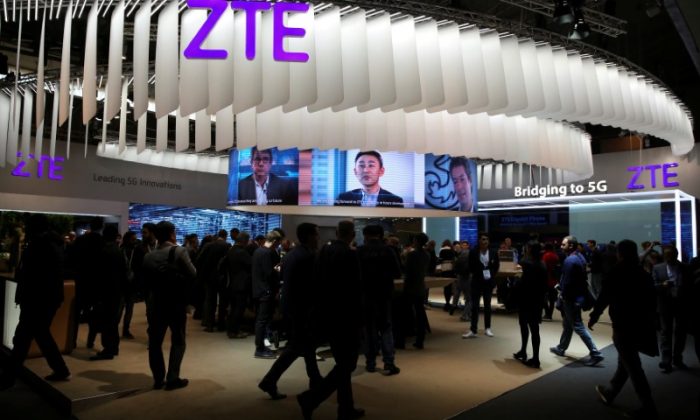 HONG KONG—ZTE’s main business operations have ceased due to a ban imposed by the U.S. government, but China’s second biggest telecom equipment maker is trying to have the ban modified or reversed, it said on May 9.

ZTE was hit by a ban last month from Washington, forbidding U.S. firms from supplying it with tech parts and software after it was found to have violated U.S. export restrictions by illegally shipping goods to Iran.

“As a result of the Denial Order, the major operating activities of the company have ceased,” ZTE said in the exchange filings late on May 9.

The U.S. action, first reported by Reuters, could be devastating to ZTE.

As one of the world’s largest telecom equipment makers alongside Huawei, Ericsson, and Nokia, ZTE relies on U.S. companies such as Qualcomm and Intel for up to a third of its tech components.

Analysts have said it will be hard for ZTE to stay competitive even if it could find non-American suppliers.

Taiwanese semiconductor company Mediatek said last week it had received a permit from the Taiwanese government to continue to supply ZTE.

The ban that threatens to cut off ZTE‘s supply chain came amid heightened trade tensions between the United States and China. The Chinese regime raised the issue of ZTE last week with a visiting U.S. trade delegation.

ZTE said this past weekend that it had submitted a request to the U.S. Commerce Department for the suspension of the ban.

ZTE appears to have suspended its online stores on its own website as well as on Alibaba Group’s e-commerce platform Taobao over the past few days, which display a “page being updated” message with no products to order.

The Chinese firm did not respond to calls and messages from Reuters seeking comment.

Consumer Cellular Inc., a U.S. wireless operator, said ZTE was unable to continue supplying phones after the sanctions, but had asked the company to hold inventory spots open as it worked to resolve the export ban, said Consumer Cellular Chief Executive John Marick in an interview.

Marick said ZTE has not given guidance on whether its phones can continue receiving software updates from Android, and discussions between the companies have been about ensuring ZTE can supply parts and service to honor phone warranties.

A ZTE employee told Reuters that staff had been reporting to work as normal but “with not much to do.” The employee, who declined to be named, said business trips had been halted.

Employees at ZTE‘s headquarters in the southern Chinese technology hub of Shenzhen City were cagey about speaking to reporters after the ban was announced, but some voiced concerns.

One employee said this was “the biggest challenge” for ZTE since he joined 10 years ago. Another said he hoped the central authorities would help.

ZTE settled the sanction case with the U.S. government last March after admitting in federal court to illegally shipping products with U.S. technology to countries including Iran. The company paid a record fine of nearly $900 million.

Last month, the U.S. government reactivated the ban after it said ZTE violated terms of the settlement and made repeated false statements.

By Sijia Jiang and James Pomfret