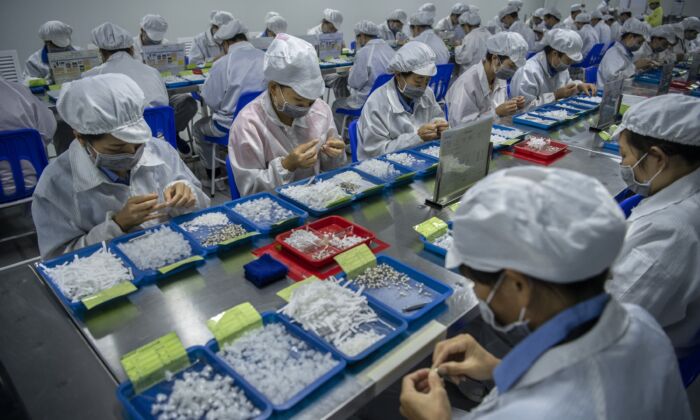 Workers assemble parts for e-cigarettes on the production line at KangerTech, one of China's leading manufacturers of vaping products in Shenzhen, China on September 24, 2019. (Kevin Frayer/Getty Images)
China Business & Economy

According to the latest data from the Fitch credit rating agency, in the first six months of 2019, Chinese state-run companies bought shares in 47 private companies that are listed on stock exchanges.

By comparison, in the whole year of 2018, Chinese state-run companies bought shares in 52 private enterprises.

The news confirms brewing anxieties within China’s private sector that the Chinese regime is pushing for more state control of private companies.

Analysts believe that by encouraging state-owned firms buy up private companies, Beijing can ultimately get its hands on more capital.

Furthermore, the recent economic downturn in China has greatly impacted the private sector—allowing the state-supported firms to swoop in, they said.

Beijing launched so-called mixed economy reforms in 2015, in an attempt to leverage funding from the private sector to alleviate the massive debt owed by state-owned enterprises.

According to the Chinese regime’s reform plan, state-run enterprises would undergo structural reform that can support them to publicly list on the stock market, merge with private enterprises, receive funds from private sectors, and so on.

Each provincial government also launched their own policies to encourage state-run companies to invest in the private sector.

China Securities Journal said it more directly in an August report: buying shares in private firms listed on exchanges is a shortcut for a state-run company to collect funds from the stock market.

The report quoted Sun Jinju, director of a Beijing-headquartered securities firm, New Times Securities: “By investing in the listed private company, the state-run companies can use the private company to push for its mixed-economy reform, and set the foundation for it to enter the capital market.”

Sun explained that if the state-run company eventually becomes the private firm’s controlling shareholder,  the former could then use the private company’s license.

Sun added that the state-run enterprise can also learn from the private firm’s experiences to improve its operating efficiency.

In a recent analysis, Andrew Collier, Hong Kong branch general manager of China’s Orient Capital Research, explained to the Chinese-language Wall Street Journal that state-run enterprises invest in the private sector in order to assist the Chinese regime in “maintaining social stability,” or to squash dissent.

Chinese private companies are struggling financially, but they supply about 60 percent of the country’s total work opportunities, he said.

Since those firms’ bankruptcy could lead to large-scale unemployment, it would bring risks to social stability, Collier said. In order to prevent this, the Chinese regime is encouraging state-run companies—supported by state financing—to keep the private sector afloat.

In recent years, the Chinese regime’s economic policies have favored state-run companies. Private companies have reported that they have a difficult time getting loans from banks, the majority of which are state-run; buying rights to land; and applying for tax incentive plans.

During the Chinese regime’s supply side reforms in 2015, private enterprises were ordered to reduce their production, while authorities enacted stricter emission standards for factories and production facilities, forcing the closure of many smaller private manufacturers.

“Harvesting the chives” is now a widely-used term in China, meaning government policies that are meant to seize private individuals’ or companies’ wealth. For example, in the film business since 2018, authorities have cracked down on tax evasion, penalizing famous movie actors and studios for failing to report their full income.

U.S.-based commentator Tang Jingyuan told The Epoch Times on Oct. 2 that he believed Beijing authorities initially allowed private companies to grow and reap profits, then established policies to limit their growth in order to force them into a financial state whereby they would seek out financing from state-owned firms.

As state-run enterprises acquire more shares, they eventually buy out the private companies at a low cost.

One example occurred in July 2018, when Bikong Longxiang, a Beijing-based asset management company and one of the majority stockholders in Kingee Culture, a gold, silver, and jewelry business, sold 73.32 percent of Kingee’s shares for a total of 1 yuan (15 cents) to HKJ Group. HKJ Group is a financial-services company controlled by a local branch of the Asset Supervision and Administration Commission (SASAC), a government agency that oversees China’s state-owned firms.

Furthermore, tariffs enacted as part of the U.S.-China trade dispute have exacerbated the private sector’s financial troubles. “The trade war is an accelerator that is pushing private enterprises to sell themselves off earlier,” Tang said.