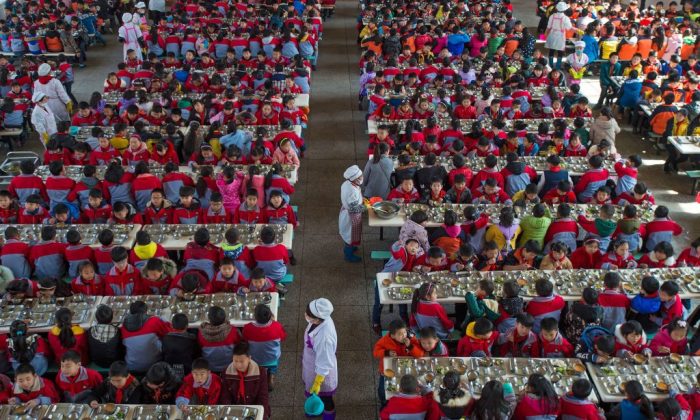 Children eat their meal at a primary school in Wuhan in central China's Hubei Province, on Feb. 27, 2017. (STR/AFP/Getty Images)
By Frank Fang

In China’s latest quest to build an all-seeing surveillance state, schools have become part of the state’s monitoring apparatus.

Students at more than 10 schools in Guizhou Province, one of China’s poorest provinces, and the neighboring Guangxi region are now required to wear “intelligent uniforms,” which are embedded with electronic chips that track their movements.

The uniforms allow school officials, teachers, and parents to keep track of the exact times that students leave or enter the school, Lin Zongwu, principal of the No. 11 School of Renhuai in Guizhou Province, told the state-run newspaper Global Times on Dec. 20.

If students skip school without permission, an alarm will be triggered.

If students try to game the system by swapping uniforms, an alarm also will sound, as facial-recognition equipment stationed at the school entrance can match a student’s face with the chip embedded in the uniform.

The two chips embedded in the “intelligent uniforms” are made by the Guizhou Guanyu Technology Co. They can withstand temperatures of up to 150 degrees Celsius (302 degrees Fahrenheit) and 500 wash cycles, according to Yuan Bichang, project manager at the firm.

Lin said that student attendance has increased since the school introduced these uniforms.

The uniforms come with additional functions, according to the company’s official website. The chips can track the exact location of every student and can activate an alarm when the sensor detects that a student has fallen asleep in class.

Coupled with facial and thumb-print recognition technologies, the uniforms also can be scanned to make cash-free purchases at school. Parents can monitor purchases by their children and even set purchasing limits through a mobile app developed by the company.

The company prides itself as being part of the Chinese regime’s tech ambitions. On its official website, Guizhou Guanyu explains that the firm was established “to respond to the country’s and the Communist Party’s call” for implementing “smart school campuses”—using the Chinese term for smart devices.

Through the company’s uniforms, schools can achieve “digitized management” of their students, its website claims.

The concept of “smart campus” and “digitalization” originated in March 2016, when Beijing unveiled its latest economic policy, the “13th Five Year Plan” (2016–2020). Included in this five-year plan was “Made in China 2025”—a blueprint for China to become a tech-manufacturing powerhouse, rivaling Western competitors by the year 2025.

In June 2016, China’s Ministry of Education, taking the initiative to follow Beijing’s plan, announced its own “13th Five Year Plan,” which called for “digitalization of education.” One example was to transform schools into  “wireless campuses.”

In February, the concept of “digitization of education” was emphasized again in a directive issued by the Ministry of Education, this time calling on regional governments to take part in helping to develop “smart campuses.”

On Sina Weibo, China’s equivalent to Twitter, many Chinese netizens expressed concern about privacy violations of students who are required to wear such uniforms.

A netizen from Wuhan, the capital of Hubei Province, wrote, “Is this going to school or going to prison?”

Another netizen from Hangzhou, the capital of Zhejiang Province, said, “Is this a violation of human rights?”

Another worried that this news foretold an increasingly Orwellian society in China. “When will everyone have to get one of these [uniforms]?” said a netizen from Shanghai, with the moniker “picidaer.”

This isn’t the first time a Chinese school has employed technology to monitor students. In May, a high school in Hangzhou City employed cameras with facial-recognition technology to track students’ attentiveness in class. According to Chinese media, these cameras can scan students’ faces every 30 seconds to analyze their facial expressions and detect their mood. This analysis will then provide a certain score to determine if a student is paying attention in class.

Also in Hangzhou, a local high school last year pioneered the use of facial-recognition technology for buying lunch at the school cafeteria.