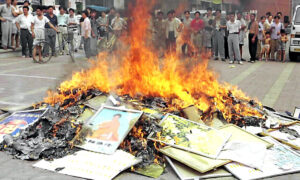 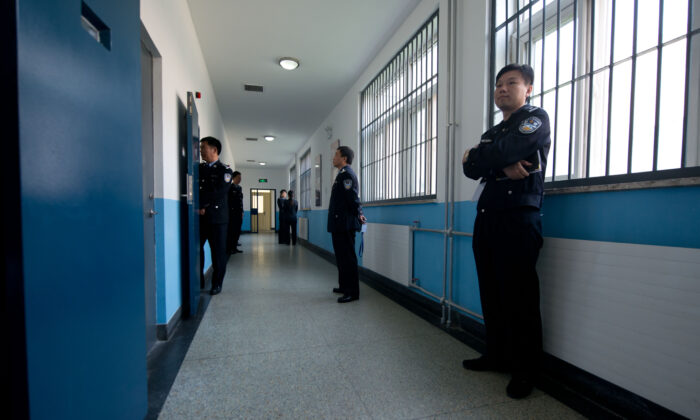 Police guards stand in a hallway inside the No.1 Detention Center during a government guided tour in Beijing on Oct. 25, 2012. (Ed Jones/AFP via Getty Images)
China Human Rights

The Chinese regime recently sentenced an 80-year-old Falun Gong practitioner to 1 and a half years in jail by claiming she was five years younger.

In China, the law provides more leniency for minors and the elderly, and the age of 75 sets the bar.

The woman, Chen Guifen, received the court verdict at the hospital bed as she underwent treatment for half paralysis and cerebral thrombosis, both symptoms she developed in September last year during her detention.

Chen was arrested while distributing materials about the regime’s ongoing persecution of her faith in a residential compound in her hometown Chongqing, a city in southwestern China, according to the U.S.-based Minghui.org that tracks the oppression campaign.

Chen had defended herself in a July 2020 court hearing by explaining how she had benefited personally from the practice. On Sept. 17—two weeks after she was hospitalized, the local court conducted a show trial at the patient room and proclaimed her guilty.

The witnesses listed on the court document were five police officers from Degan Police Station, the same facility that had ordered Chen’s arrest, according to Minghui. She was also fined 1,000 yuan (around $153).

The Chinese spiritual discipline Falun Gong teaches five sets of slow-moving exercises and asks adherents to improve their moral upbringing by following three core tenets: truthfulness, compassion, and tolerance. An estimated 70-100 million people took up the practice by 1999, when the regime deemed its popularity a threat and began a ruthless campaign designed to wipe it out.

Wu Shaoping, a former human rights lawyer in Shanghai, believed that the authorities had deliberately changed Chen’s age with the goal of inflicting harsher punishment.

Under Chinese criminal law, seniors who are 75 or older should receive more leniency. Drawing on his experience, Wu said that authorities have typically given suspended sentences under similar circumstances unless the case falls into eight most egregious categories—intentional homicide, arson, spreading hazardous substances, robbery, rape, kidnapping, bombing, and aggravated assault—none of which applies to Chen’s case.

The court’s action was “definitely illegal,” said Wu in a phone interview with The Epoch Times.

“Manipulating people’s date of birth is in itself a breach of the law,” he said. “Especially given that their goal is to throw innocent persons into jail.”

In past political campaigns, Chinese police were often under pressure to fulfill quotas, according to human rights watchers. To appease their bosses and get monetary rewards, police sometimes would make arrests without caring so much about evidence, according to Wu.

“Even when there isn’t a case, they would come up with one. It’s quite scary,” he said.

He added that in China, “normal citizens are no better than ants.”

“When facts are missing, they just make up the facts. If they can do this to one person, they can do the same thing to another,” he said.

“[They] can fabricate any facts at will to frame you and get you into prison.”

Chen had been a regular target of police harassment prior to her arrest, with her house raided at least twice in 2016 and 2019. In one house visit in 2017, the police and local officials asked her to write “repentance statements” to renounce her faith and stop spreading literature about the practice, threatening to send her to the brainwashing center if she refused to comply.

In 2020, at least 114 Falun Gong practitioners were sentenced over their belief, including Chen. The oldest among them was 88.

The year saw 42 elderly deaths under the persecution. Nearly 1,200 others—a great majority of them aged between 70 and 94—reported arrests or harassment.