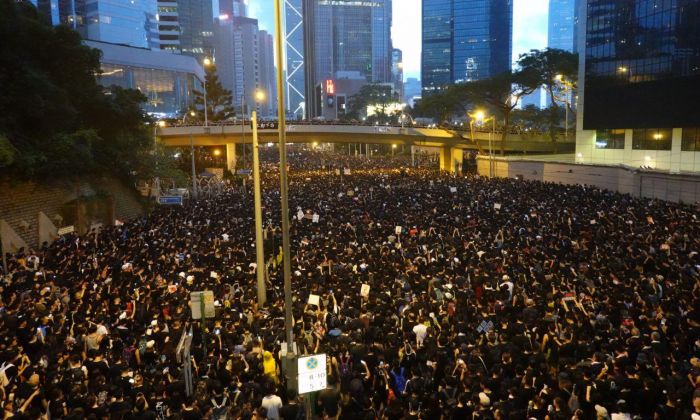 In the evening of June 16, thousands of Hong Kongers get together at Admiralty to ask the city government leader, Chief Executive Carrie Lam to withdraw the extradition bill and resign. (Gang Yu/The Epoch Times)
Chinese Regime

After nearly two million Hongkongers took to the streets to call for a controversial extradition bill to be shelved, the Chinese regime took measures to censor all related information, while state-run media spun the protests as anti-U.S. demonstrations.

After heavy criticism from netizens, China Daily, an English-language state-run media directed at international audiences, was forced to delete its related Facebook posts.

More than 25 percent of the city’s population, dressed in black, flooded the streets on June 16—making it the largest protest in the city’s history.

Hongkongers demanded that the city government withdraw the extradition bill, which would allow mainland China to seek extradition of suspects. The bill has drawn broad opposition within Hong Kong society, with many fearing that given China’s disregard for the rule of law, the proposal could allow the Chinese regime to charge and extradite people with impunity.

It was the biggest news story in Hong Kong and around the world.

But on Chinese media websites, there were no videos, photos, or reports to be seen about the Hong Kong protests.

On Baidu, China’s most popular search engine, a search for the keywords “extradition bill” and  “Hong Kong parade” produces no results about the one million protesters who turned out on June 9; protests on June 12, when police used tear gas, rubber bullets, and bean bags to disperse crowds; and the June 16 march.

U.S.-based Chinese media China Digital Times, which covers the Beijing regime’s censorship tactics, reported on June 16, based on insider sources, that the Chinese Communist Party’s (CCP) Publicity Department—a government agency in charge of propaganda dissemination—ordered all Chinese websites to ban extradition bill-related videos, as well as comments on Cantonese pop songs that could be read as anti-CCP.

Some state-run media reported on the Hong Kong events, but by misrepresenting the facts.

A Xinhua report on June 17 described the protests as having a negative impact on Hong Kong’s social order. The report didn’t include details about the protests, but said they were “not rational” because local businesses couldn’t operate, causing financial losses.

“Many adults didn’t read the extradition bill, and just blindly went on the streets [to protest],” the report said.

In fact, many shops and businesses voluntarily joined a strike in protest of the bill.

In a June 18 report, Xinhua reported that the Hong Kong government suspended the extradition bill, with claims that many Hongkongers want the city to refocus on financial development.

The report falsely claimed that people marched to the U.S. Consulate General in Hong Kong and Macao, calling on the United States to “stop interfering in Hong Kong affairs.”

China Daily published an editorial on the same day, in which it said the protesters were fooled by “manufactured radicalism,” and the purpose was for “dividing Hong Kong society and damaging the city’s reputation for law and order.”

On China Daily’s official Facebook page, related posts were deleted after many comments by netizens calling out the falsehoods.

A mainland Chinese reporter surnamed Chen, who traveled to Hong Kong to witness the march on June 16, told the Hong Kong edition of The Epoch Times why he believed the Chinese regime was so nervous about the extradition bill fallout.

“Actually, the Chinese regime is having a big headache about the U.S.-China trade war. Now, this Hong Kong incident is like a second battlefield for the CCP, which made Beijing feel more pressured,” Chen said.

Chen added that Chinese authorities aren’t allowing any media reports on the Hong Kong protests and are deleting related content that netizens are circulating, because the regime is worried that Chinese will be encouraged to protest for their rights if they see what Hongkongers have been doing recently.