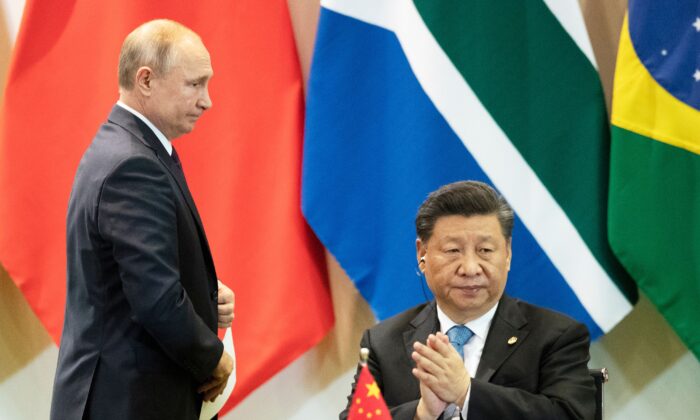 Chinese leader Xi Jinping (R) and Russia's President Vladimir Putin attend a meeting with members of the Business Council and management of the New Development Bank during the BRICS Summit in Brasilia, on Nov. 14, 2019. (Pavel Golovkin/POOL/AFP via Getty Images)
Russia-Ukraine War

Almost one month into Russia’s invasion of Ukraine, the Beijing regime’s diplomatic dance during the crisis has been drawing intensifying criticism from the West.

As the world rebukes Moscow for mounting the war, the regime has sought to cast itself as a neutral party, with an array of statements seemingly aimed at appeasing both sides of the conflict. It has refused to condemn Russia, called for a peaceful settlement to the crisis, declined to join Western sanctions, vowed to continue normal trading with Moscow, and blamed the West for inflaming war in the region.

There has been a steady rise in criticism by Western officials in recent weeks, calling out what they see as Beijing’s tacit support for Moscow, remarks that are growing louder as the war progresses.

When a Chinese foreign ministry spokesperson claimed that what Ukraine needed was baby food and sleeping bags from Beijing rather than the weapons the United States is sending, it drew a rare strongly worded response from Ukraine.

China Shares ‘Common Goal’ With Russia to Undermine US, Can’t Be Trusted to Mediate End to Ukraine Crisis: Lawmakers

“This is absolutely not serious and not worthy of the status of a great respectable country!” Iryna Vereshchuk, Ukraine’s deputy prime minister, wrote in a Facebook post on March 18 shortly after the Chinese press conference.

“What blankets are you talking about? The Russians are bombing residential areas of our cities. We need air defense systems to close the sky over our civilians. What waterproof bedding are you talking about?” she said, in what marked the first show of anger from the besieged country toward Beijing since the invasion began.

“I would suggest that the Chinese Foreign Ministry ask the opinion of 160 Chinese students whom we evacuated out of the Russian shelling last week.”

Her comment was a jab at China’s haphazard evacuation of its nationals in the war-torn country. Unlike those from many other countries, Beijing gave no forewarning to Chinese citizens about a possible Russian invasion in the lead up to the attack, leaving as many as 6,000 Chinese caught unprepared. Evacuation efforts didn’t begin until Feb. 28, four days after Russia invaded, and authorities flip-flopped on safety precautions, initially telling citizens to attach national flags on their cars, only to reverse course days later.

Beijing and Moscow announced a “no limits” partnership in February less than three weeks before Russian President Vladimir Putin ordered the assault.

Since then, U.S. and EU intelligence have both warned that Beijing has signaled a willingness to supply military aid to Russia.

Concerns became so heightened that President Joe Biden, during a two-hour video call with Chinese leader Xi Jinping on March 18, warned Xi of “implications and consequences” if Beijing were to materially support Moscow in the war.

The two sides walked away without forming a consensus, and a senior administration official later told reporters that the president “wasn’t making specific requests of China” but “laying out his assessment of the situation.”

According to some Republican lawmakers, at least, such a tone is hardly forceful enough to deter China.

Sen. Rick Scott (R-Fla.), who co-sponsored the CURB CIPS Act to prevent Chinese banks from helping Russian firms to evade sanctions, said Biden should “make it extremely clear to President Xi and dictators around the world that the United States will always stand on the side of freedom and democracy and that the consequences for choosing to fuel Putin’s war will be strong, severe and hard-hitting.”

“Communist China is watching how the United States, NATO allies, and the global community have rallied in support of Ukraine, cut off Putin and his thugs, and are starving the Russian economy—and President Xi needs to know that communist China will be cut off just the same if it chooses to support Russia,” his office told The Epoch Times in a statement.

Dissenting voices are emerging inside China as well. A Chinese academic affiliated with the State Council, in an essay now censored in China, called on the regime to cut itself off from Moscow as quickly as possible or risk isolation by the world. It got tens of thousands of views before its removal from the Chinese internet.