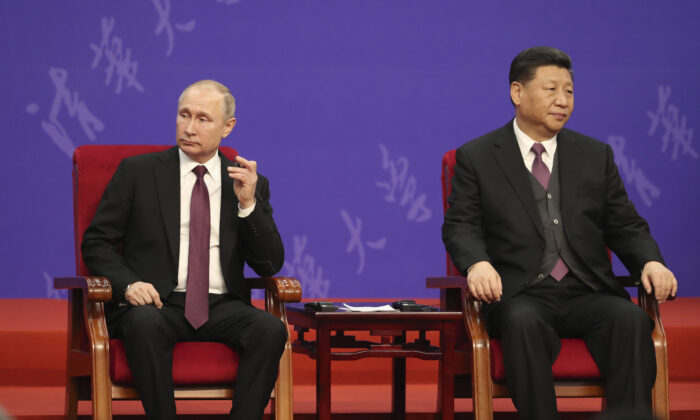 As the Chinese regime feels growing heat over its refusal to take a stand against Russia’s invasion, it is turning back to its old tactic: blaming the West.

Moscow’s invasion of Ukraine has precipitated a worsening humanitarian crisis and given rise to allegations of war crimes, but the Chinese regime has placed blame for the conflict on the United States and its Western allies rather than Russia.

Chinese diplomats are claiming that Western sanctions on Russia are baseless, the United States has been profiting off of the Ukraine crisis, and the West has been responsible for hyping the Ukraine–Russia tensions to where it is today.

“The moves by the U.S.-led NATO have pushed the Russia–Ukraine tension to the breaking point,” Zhao Lijian, a spokesperson for China’s foreign ministry, said at a March 9 press briefing.

Beijing, according to Zhao, has been a scapegoat during the affair, and the United States is the chief culprit that “racks its brains to discredit China.”

The remarks from Zhao, who has built a name for his combative tone against the West and for his embrace of virus conspiracy theories blaming the United States for the pandemic, suggests a defiant Beijing in face of rising pressure to do more to help end the crisis. They also came as the regime continued to make friendly overtures to Moscow, now made an international pariah.

Two weeks after Russia invaded Ukraine, Beijing has refused to call the action an “invasion.” Its state-run media outlets have instead taken up Russia’s preferred way of description: a “special military operation.”

The strongest characterization of the conflict from Beijing came on March 8, when Chinese leader Xi Jinping used the word “war” during a call with French and German leaders. Xi said he was “deeply grieved by the outbreak of war again on the European continent,” according to a readout. But Zhao said the next day that such wording signified no change in China’s position.

Beijing has also perpetuated Russia’s disinformation narrative that the U.S. military is running biological labs in Ukraine and storing “dangerous pathogens” there. A State Department official told The Epoch Times that the allegation was “Russian propaganda and total nonsense,” serving only to justify the military campaign against Ukraine.

China Shares ‘Common Goal’ With Russia to Undermine US, Can’t Be Trusted to Mediate End to Ukraine Crisis: Lawmakers

The Chinese regime’s refusal to condemn Russia has drawn criticism from Western officials, with some U.S. lawmakers saying that Beijing has been deliberately unhelpful because of its strong ties to Russia. Given that both powers share a common goal of undermining the West, the Chinese regime can’t be counted on to provide support in bringing about a peaceful end to the conflict, the lawmakers told The Epoch Times.

While the Chinese regime insists that its relationship with Russia is “non-alliance,” it has also described Russia as a “most important strategic partner” and has pledged to further the bilateral relationship between the two countries regardless of “how precarious and challenging the international situation may be.”

As Western sanctions take a toll on Russia’s economy, the regime has also pledged to continue trading with Moscow as normal, although some analysts have suggested that Beijing would be reluctant to overtly help Russia evade sanctions, given the reputational and financial costs of doing so.

China’s state-owned UnionPay system has offered Russia some respite when Western card systems from Visa to Mastercard suspended operations in the country. Zhao also said on March 9 that China and Russia will “always maintain sound energy cooperation” and conduct oil and gas trade.

Washington has cautioned that it will “take steps” to ensure Chinese companies abide by commercial sanctions.

Russia and China, according to retired Lt. Col. Robert Maginnis, are seeking a new world order, one that’s “far more accepting of an authoritarian regime, rather than the liberal values that formulated the world order post-World War II.”