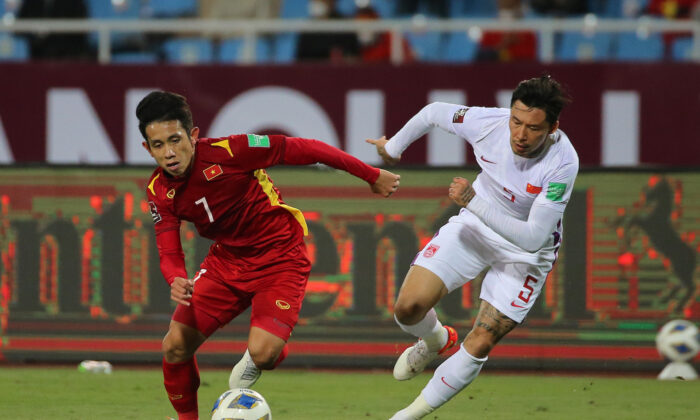 In the eighth round of Group B of the 2022 Qatar World Cup Asian Qualifiers, the Chinese men’s national soccer team lost to Vietnam.

On Feb. 1, the visiting Chinese faced the home team Vietnam, who had lost all seven rounds in the qualifiers.

Chinese coach Li Xiaopeng sent in an aggressive lineup, but while focusing on offense, the Chinese team’s defense line made fatal mistakes.

The Chinese lost 1-3, marking the first time the Chinese men’s soccer team has lost to Vietnam in decades.

The Chinese team ranked the second last in the group, while Vietnam ranked at the bottom.

The loss knocks the Chinese out of the World Cup.

According to a Beijing News report, the bottom line for the national soccer team’s match in Hanoi was “to play the game against the Vietnamese team on the first day of the Chinese New Year, and not to disappoint the fans across the country.”

But the Chinese team’s subsequent defeat has been difficult for their fans to accept.

“The national soccer team makes the most money among East Asian countries and plays the worst game,” one fan ranted. “Have you ever seen South Korea and Japan buy naturalized players? They don’t work hard but want to take a shortcut, not only humiliating themselves but also bringing the entire country into the abyss. It is really ridiculous and shameless. There is no bottom line. A group of bureaucrats who like to brag but do nothing make money everyday, money and praise themselves, damn them!” the fan said.

Previously, the mainland Chinese media Daily Economic News reported that the average salary of Chinese Super League soccer players in 2019 exceeded US $1.2 million, and the average salary of players in the Japanese Professional Soccer League was US $320,000. The Chinese men’s soccer team ranks 76th in the world and 9th in Asia, while Japan ranked 26 in the world and was the top in Asia.

After the game, in an interview with “Five Star Sports” Fan said, “They lost 1:5 in Hefei. How would they explain it? Shameless! After losing to Thailand, they will loose to Vietnam, and even Burma, until there’s no team to lose to.”

Fan also mentioned, “Government department, how many soccer association presidents have been there for each term? Has anything changed? Only superficial things.”