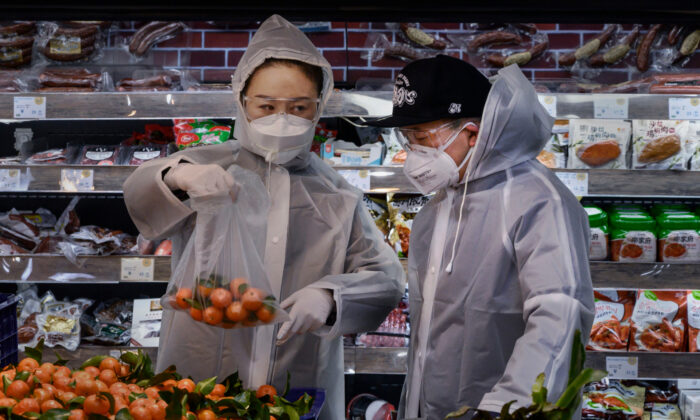 A Chinese couple wear plastic coats and protective masks as they shop for groceries at a supermarket in Beijing on Feb. 11, 2020. (Kevin Frayer/Getty Images)
By Katabella Roberts

The Chinese Embassy in Australia has emailed local journalists, accusing them of “politicizing the coronavirus” by saying it originated in China, “without any supporting facts,” according to a journalist at the Australian Financial  Review.

Financial Review journalist Michael Smith explained in an article published March 9 that he received an email last week from the Chinese embassy in Canberra, explaining comments made by Beijing’s Foreign Ministry during a press conference on March 4 about “highly irresponsible” references by some media to the “China virus.”

Smith explained that the letter was evidence of how the Chinese Communist Party (CCP) has pivoted its propaganda narrative, now insinuating that the virus originated in other countries.

Up until recent weeks, China’s own state media said that the novel coronavirus and the disease it causes, COVID-19, likely originated from the Huanan Seafood Wholesale Market in Wuhan, which was shut down shortly after the emergence of the virus.

In the press conference mentioned in the letter, Foreign Ministry spokesperson Zhao Lijian told reporters it was “highly irresponsible for some media” to dub the novel coronavirus the “China virus.”

“We firmly oppose that,” he said, adding that “no conclusion has been reached yet on the origin of the virus.”

In fact, many researchers and the World Health Organization have established that the virus outbreak originated in the Chinese city of Wuhan. But scientists are still researching how the virus first emerged and began infecting humans.

Zhao claimed that “some media clearly want China to take the blame and their ulterior motives are laid bare.”

Smith said that the Chinese authorities are continuing with their efforts to deflect all criticism and blame “for the fact that authorities in Wuhan failed to report the seriousness of the health crisis for those crucial weeks in January before millions left the city for Chinese New Year.”

A month after the head of China’s Center for Disease Control and Prevention told reporters that health experts believed the virus likely came from wild animals at the Wuhan wet market, although the source animal had not been identified, Zhong Nanshan, a Chinese epidemiologist and pulmonologist who researched the SARS coronavirus in 2003, told reporters that the novel coronavirus may not have originated from China.

Speaking at a press conference in the city of Guangzhou on Feb. 27, Zhong, who also heads the Chinese regime’s panel of experts overseeing efforts to contain the epidemic, said that “although COVID-19 was first discovered in China, it does not mean that it originated from China.”

“This is a human disease, not a national disease,” Zhong added.

In a separate press conference on Monday, China’s Foreign Ministry spokesperson Geng Shuang said it was a “despicable practice” to call the virus the “Wuhan coronavirus,” after U.S. Secretary of State Mike Pompeo used the term.

The Chinese regime has since taken extreme measures to contain the virus after its slow initial reaction, including locking down entire cities and not allowing people to leave their homes.

But as the virus spread to more and more countries, the CCP has received criticism for covering-up the extent of the outbreak and underreporting the number of infections and the death toll.

Last week, The Epoch Times spoke to a funeral director in the Chinese city of Jining, in eastern China’s Shandong province, who said he was concerned that authorities were covering up deaths related to the novel coronavirus outbreak after discovering that some bodies the facility received from local hospitals had death certificates marked with “unidentified pneumonia” as the cause of death.

“My staff only know how to burn bodies. They have very little medical knowledge,” said the funeral home director in an interview with the Chinese-language Epoch Times. “The hospitals wrote the cause of death as unidentified pneumonia. It terrified my staff.”

The director said that in February, his funeral home received four or five bodies with cause of death as “unidentified pneumonia” from the city’s No 1. Hospital and No. 2 Hospital, adding that “hospitals have the capacity to write clearly the cause of death, but they didn’t label it [clearly].”