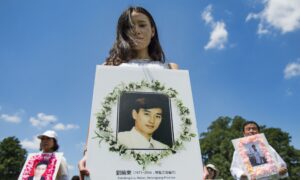 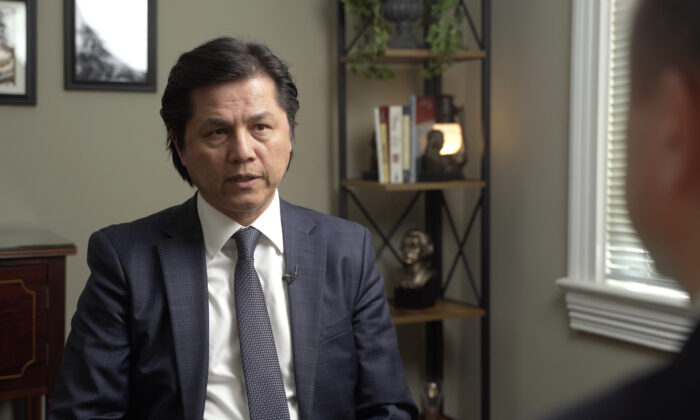 Nury Turkel, the current vice chair of the U.S. Commission on International Religious Freedom, speaks in an interview with The Epoch Times in May 2021. (The Epoch Times)
China Human Rights

WASHINGTON—More than ever, the Chinese Communist Party is finding itself backed into a corner as the world wakes up to its human rights atrocities, according to Nury Turkel, the vice chair of the U.S. Commission on International Religious Freedom (USCIRF).

“China has never been this isolated in the recent memory, and the isolation is making them belligerent,” Turkel told The Epoch Times at the annual International Religious Freedom Summit. “That’s why they are picking fights with camp survivors,” he added.

Turkel was referring to attempts by Chinese officials to publicly shame Uyghur women who gave first hand accounts of sexual abuse at the internment camps in Xinjiang, where up to 1 million Uyghurs and other Muslim minorities are held under what the regime claims to be a “counter-terrorism” campaign.

In a February press conference, a Chinese foreign ministry spokesperson held up pictures of the former detainees and called one of them, Tursunay Ziyawudun, an “actress” and accused her of “spreading lies.”

Such behavior, coming from a government official, hardly measures up to the image of “the country that everybody’s scared of,” said Turkel.

Ziyawudun shared her story at the opening of the second day of the Summit. During her year in a camp, beginning in 2018, Ziyawudun said, she saw police officers take Uyghur women from the cells to do “whatever they wanted.” Some of the women were brought back near the point of death. Some others had lost their minds. She witnessed a Uyghur woman in her 20s being raped, while three Han police officers did the same to her.

“These memories make my heart bleed,” she told the attendees on July 14.

Turkel noted that virtually every speaker on Wednesday highlighted the suppression in Xinjiang, which, following the U.S. lead, a growing number of countries have recognized as a “genocide.”

“That’s a miscalculation on Beijing’s behalf,” Turkel said of the regime’s human rights abuses. “They think that they could get away with this as they have done to the Falun Gong practitioners and they have done to Tibetans for years and years.”

Global outcry over human rights atrocities in China have been increasing, with lawmakers pushing for a boycott of the 2022 Beijing Olympics from within their respective governments.

Over the past week, the U.S. blacklisted over a dozen Chinese entities that had a role in aiding abuses in the Xinjiang region and the regime’s military modernization, while at the same time it dialed up warnings of business risks in Xinjiang. Forced organ harvesting, a state-sanctioned practice primarily targeting Falun Gong practitioners but also other prisoners of conscience, is also drawing greater scrutiny.

The mounting pressure is not being missed in Beijing. For Chinese leader Xi Jinping to call for communist officials to create a “lovable” Chinese image—this in itself is a sign of insecurity, according to Turkel.

“They are cornered,” he said.

An Uyghur American attorney, Turkel was born in a Chinese re-education camp in Kashgar where his mother was imprisoned. That was during the height of the Cultural Revolution, a decade-long violent campaign that swept China into chaos and killed millions.

Turkel has not returned to China since coming to America 26 years ago. Two years after he left, the regime’s military crushed a large demonstration in his father’s hometown.

The global push back, in his eyes, has come “a little too late.”

It “shouldn’t take a genocide” and it shouldn’t be the end of Hong Kong democracy “for the international community to have this rude awakening,” he said.

A Brookings Institute report, published last year, estimated that the regime has exported its mass surveillance platforms to over 80 countries since 2008. Chinese influence in the West is “everywhere,” in the business, media, academia, and government, Turkel said.

With the regime continuing to project its narrative worldwide, the United States should instead break out of that framework and stop worrying about “how the CCP does things,” said Turkel.

“As a free nation, as a free people, we should do what is right,” he said, adding that “eventually, this will force them to change.”