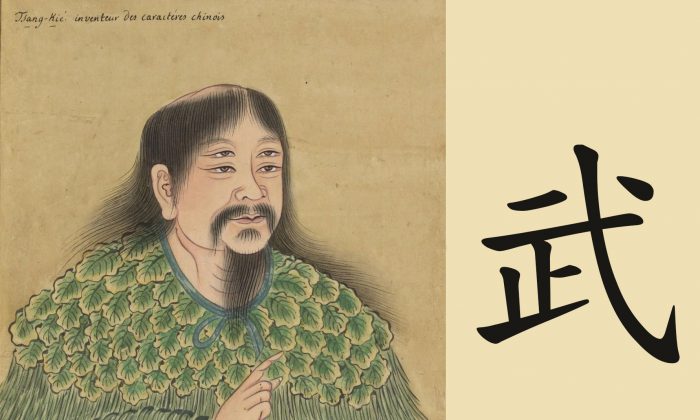 Chinese Character for Military Reveals the Art of War

Not long after Donald Trump became president of the United States, he authorized a military strike on a Syrian regime airfield, which had been used to launch a chemical attack that killed many of its own people.

Trump’s younger son, Eric Trump, recently told The Daily Telegraph that his father is a big believer in Ronald Reagan’s philosophy of achieving peace through strength. That is exactly the meaning of the Chinese character 武 (wu), for military or martial.

“The Art of War,” an ancient Chinese military treatise from 2,500 years ago, mentions that breaking the enemy’s resistance without fighting is supreme excellence, and this military philosophy is well expressed in the character 武 that carries a history of 5,000 years.

Let’s look at the formation of 武. The radical on the right side resembles the character 戈 (ge), a weapon used in ancient times. The weapon is a horizontal knife made of bronze or iron with a long handle.

The lower part of the left side is the character 止 (zhi), meaning to stop. Thus a military force has the ability to stop the use of weapons. A country like the United States with superior military power has the ability and obligation to stop violence and uphold righteousness.

The character 止 in ancient Chinese also refers to the toes or feet. Therefore, the character 武 literally refers to soldiers marching with weapons.

The character 舞, for dance, and 武, for military or martial, are both pronounced ‘wu’ but are written differently.

Shen Yun is based in New York and has performed in major concert venues around the world since 2006. Eric Trump appreciated the performance when he saw it at the David Koch Theater at the Lincoln Center in New York a few years ago with Lara Yunaska, then his girlfriend and now his wife.