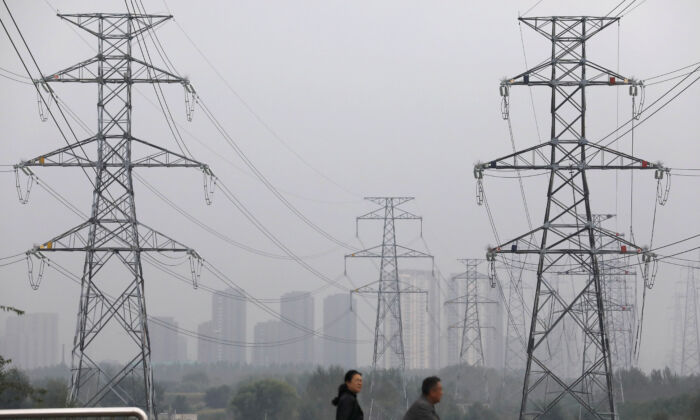 A large part of China is in the midst of a growing power supply crunch that has forced factories to cut production and brought major disruptions to daily life.

While authorities have remained largely silent on the causes of the supply shortage, analysts say the power crunch, which has hit more than 10 provinces in China’s east, is the result of the country’s reliance on coal, its import ban on Australian coal, and the Beijing regime’s tightening of energy consumption and emissions standards in its bid to tackle climate change.

Since December 2020, factories in the country’s industrial hubs, including Zhejiang Province, have encountered the local government’s order to halt production during peak hours.

But the situation has worsened in the past week, with three northeastern provinces experiencing “unexpected and unprecedented” power cuts on Sept. 27, state-run tabloid Global Times reported. Jilin, Liaoning, and Heilongjiang have been rationing power since Sept. 23.

Southern China’s Guangdong Province, a major industrial and shipping hub, has recently required factories to shut down up to five or six days each week to reduce power use, state news agency Xinhua reported on Sept. 29.

The widening power rationing and forced cuts have caused supply disruptions to large global companies such as Apple and Tesla, as well as small U.S. businesses, such as Dakota Micro in North Dakota.

The primary reason behind China’s power troubles is that authorities were “too optimistic” in their goals to limit consumption, said Su Tzu-yun, a senior analyst at Taiwan’s government-funded Institute for National Defense and Security Research.

By 2025, China aims to reduce national energy consumption per unit of gross domestic product by 13.5 percent from 2020 levels, and emissions by 18 percent. In August, nine provinces received a “first-level warning” from the country’s top economic planner, flagging increased consumption over the first half of the year and severe challenges to meet this year’s targets.

These energy targets imposed by central authorities were too harsh, prompting local officials to “sacrifice” industry and residents to avoid missing its goals, Su said.

Beijing’s decision to ban imports of Australian coal in 2020 has also contributed to the current crisis, Su said. The ban, instituted for diplomatic reasons, has “backfired” on China, the expert said.

Since Australia’s prime minister called for an independent investigation into the origins of the pandemic in April 2020, the Chinese regime has imposed a spate of trade tariffs and restrictions on the country, including an import ban on coal in December 2020. Western officials have described Beijing’s actions as “economic coercion” designed to intimidate Canberra into softening its stance toward the Chinese regime.

Around two-thirds of the country’s electricity comes from burning coal. While more than 90 percent of the fuel is mined locally, domestic supplies have declined amid tightened inspections of coal mines, Su noted.

China has since stepped up its efforts to source more coal from overseas, but imports have failed to close the supply shortfall.

Curbs have been imposed on household power use in northeastern Liaoning Province and two neighboring provinces that are home to nearly 100 million people. Several residents in Liaoning confirmed to The Epoch Times that they experienced unannounced power cuts recently.

The top provincial official said on Sept. 26 that rationing power for industrial usage, which accounts for about 70 percent of the country’s electricity consumption, still can’t fill the “massive” gap between power supply and demand. Neighboring Jilin Province, meanwhile, vowed to source more coal for household heating use as winter approaches.

Dakota Micro, a North Dakota-based company that manufactures ruggedized camera systems and surveillance equipment for agriculture, is among many foreign businesses facing production disruptions as their Chinese suppliers grapple with power cuts.

The firm’s Chinese manufacturer told Dakota Micro that authorities warned of electricity cuts, but didn’t provide a specific time. This uncertainty has pushed Dakota Micro to double the number of orders to ensure enough inventory on hand.

“It’s kind of a double-edged sword because to have that much … money of [our] company tied up in inventory is a huge gamble,” Charissa Rubey, the company’s chief executive, told NTD, a sister outlet of The Epoch Times. “But it’s worth it for us because now we’re becoming one of the only companies that actually have some of that inventory on hand.”

“It’s kind of crazy,” Rubey said, adding, the company has never heard of such problems from suppliers before.

Rubey hopes she can find manufacturers in other countries if the power outages continue. The main product they order from China is liquid crystal display (LCD) panels, of which Chinese makers have accelerated production in recent years.

Luo Ya, Cathy He, and Reuters contributed to this report.