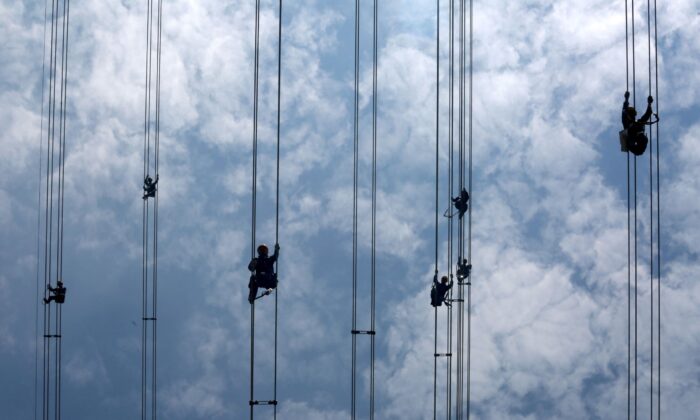 From late September, China has been facing another round of major electricity shortfalls since last winter. At least a dozen provinces have issued power curbing or rationing orders.

Foreign trade SMEs—small- and medium-sized enterprises, which are engaged in foreign trade—are severely impacted by the orders.

Textile dyeing and printing industries in China’s eastern Zhejiang Province are among the hardest hit in this new wave of power shortage.

The local authorities of Shaoxing City, Zhejiang Province, ordered emergency power cuts on Sept. 21, 2021, according to a local businessman.

“The notice came very abruptly. It came at 3 a.m., informing the 161 businesses on the list that steam supply would be cut from 6 a.m. and electricity would be cut from 8 a.m., ” Mr. Lin (pseudonym), owner of a dyeing business in Shaoxing, told the Chinese-language edition of The Epoch Times in an interview on Sept. 23.

According to the emergency power cut notice, all the businesses in Shaoxing must close for three days from Sept. 19 to 21, and all the energy-intensive textile printing and dyeing businesses must halt their production from Sept. 19 to the end of the month.

Lin said that the power cut delays their delivery and results in serious consequences to the local businesses.

“It is very serious for us—that means all our orders will be delayed, we cannot deliver on time,” Lin said, “our clients may ask us for compensation.”

He said that the sudden power cut hit foreign trade businesses really hard. “Some business owners went to the local government for help, which was just useless,” Lin said.

Mr. Bai (pseudonym), the owner of a socks company in Foshan City, Guangdong Province, said in the interview with the Chinese-languge edition of The Epoch Times on Sept. 23 that power curbing is becoming more severe.

“At first we were allowed production for five days in the week, but now the local authorities only allow us two days,” Mr. Bai said. He has no idea when the power curb will be lifted, and his company is suffering huge losses every day. “I am not able to fulfill my daily order,” Mr. Bai said.

Mr. Liao (pseudonym), the owner of a silicon products company in Zhongshan City, Guangdong, told The Epoch Times a similar situation on Sept. 23. He said the local power curbing policy is “open for three days and close for four days” every week.

“We can’t deliver our products on time, this is one thing. Our employees’ pay is affected because they don’t have any work to do for four days every week. As to the company, the production, revenues, and profit, everything is suffering from huge losses,” Liao said.

He is worried that the company might go bankrupt if the situation continues for two more months, yet he has no idea when the curbing will stop, said Liao.

Other cities in Guangdong are taking similar power rationing policies, forcing local manufacturers to stop production up to six days a week.

This wave of power curbing is expanding to over ten provinces in China, according to a report by Guancha, a CCP’s official mouthpiece, in September 2021.

Possible Reasons for the Power Cuts

One of the possible reasons is that the Chinese regime has been pushing local governments to achieve targets of energy intensity and emissions.

In August, the CCP’s economic regulator issued a notice of warning to nine provinces that missed the targets in the first half of the year. Zhejiang and Guangdong are among the nine provinces.

Mr. Lin from Shaoxing, Zhejiang Province, told The Epoch Times that the power curb orders might have originated from the provincial government, which fails to control energy intensity and consumption and has been warned by the central government.

Wang He, China affairs commentator and columnist, told the Chinese-language edition of The Epoch Times in an interview on Sept. 23 that the large-scale power crunch was due to the regime’s systematic pricing conflicts.

With coal prices increasing in the market, the more electricity the power plants generate, the more losses they suffer. “This conflict has long existed in the CCP’s pricing system, and the power curbs reveal the conflicts,” Wang said.

An anonymous insider of Guangdong power grid told China’s business publisher Yicai in September that for every feed-in kilowatt-hour, the company pays $0.09 as generation cost but receives only $0.06.

Shaoxing Yuandong Thermoelectricity Co., Ltd. (“Yuandong Thermal”) said in its Sept. 16 notice that coal prices have been soaring since last November. “Coal in northern ports costs approximately $224 per ton, and there is no coal available despite the high price. It is difficult to purchase coal,” the notice says. According to the notice, the company’s stockpile of coal can only suffice seven days of power generation, which “hits a historical low.”

Zhejiang Longde Environmental Thermoelectricity Co., Ltd. (“Longde Thermal”) published a notice on Sept. 17, saying that due to coal supply shortage and rocketing prices of coal, its coal inventory has been very low, which can only satisfy two- to four-day power generation. It informs its clients to prepare for electricity shortfall.

The Epoch Times reached out to Longde Thermal, and a staffer declined to comment and replied that the company is implementing government policies.

The Epoch Times called the local government departments of Shaoxing, and the calls were not answered.

The Epoch Times’s call to Yuandong Thermal was not answered either.

Fang Xiao contributed to the article.