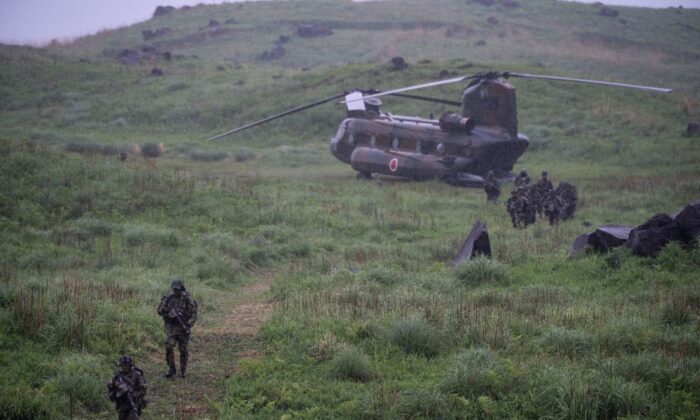 Japan's Self-Defense Force soldiers walk from a Chinook helicopter during a joint military drill between the Japan Self-Defense Force, the French Army and U.S. Marines at the Kirishima exercise area in Ebino, Miyazaki Prefecture, Japan, on May 15, 2021. (Charly Triballeau/Pool/AFP via Getty Images)
Thinking About China

China’s Lack of Allies Is Hobbling Its Military

The United States may be experiencing setbacks in Europe, trying to dissuade Russia from invading Ukraine and bullying other eastern European states, but it is enjoying exceptional success in strengthening its alliances in the Asia-Pacific. These efforts are clearly aimed at combating China’s increasingly bellicose behavior.

First, Washington was able to craft a military-technological alliance with Canberra and London to supply nuclear-powered submarines to Australia. The AUKUS pact contributes significantly to building up Australia’s military might; it also goes a long way in bringing the United Kingdom back into the Asia-Pacific, a precursor perhaps to a permanent presence.

In recent weeks, the United States has also fortified its bilateral military links with South Korea and Japan. In late December, Washington and Tokyo agreed to a new host-nation support (HNS) deal, whereby Japan will spend approximately $1.82 billion annually to support the 55,000 troops that the United States has based in Japan.

At the same time, the two countries have quietly drafted plans for joint operations in case China attacks Taiwan, including dispatching U.S. Marines to bases on the Ryukyu Islands.

Finally, Washington and Tokyo have agreed to collaborate on researching and developing new defense technologies, including defenses against hypersonic weapons.

These accords follow on a new HNS deal with South Korea signed by the Biden administration last March. Under the terms of this agreement, Seoul will increase its support of U.S. troops in Korea by 13.9 percent to $1.03 billion annually. This deal resolved the impasse created by former President Donald Trump, who had pressured Seoul for a five-fold increase in HNS payments.

In May 2021, President Joe Biden and South Korean President Moon Jae-in issued a joint statement pledging to “oppose all activities that undermine, destabilize, or threaten the rules-based international order” in the Indo-Pacific, to “maintain peace and stability … and respect for international law, including freedom of navigation” in the South China Sea, and, in particular, to preserve “peace and stability in the Taiwan Strait.”

At the same time as the United States is shoring up its alliances in the Asia-Pacific, its regional allies are increasing their defense expenditures and acquiring new military capabilities. Japan has finally broken its 1-percent-of-GDP ceiling on defense spending, hitting nearly 1.1 percent in 2021. Tokyo is using these funds to buy additional F-35 fighter jets, convert two amphibious assault vessels into aircraft carriers, and develop new missiles, destroyers, and a sixth-generation combat aircraft.

For its part, South Korea is expanding its blue-water navy with a new aircraft carrier, missile-launching submarines, and perhaps even an indigenously developed nuclear-power attack submarine. Overall, Seoul appears to be moving away from its traditional middle ground between the United States and China, tilting decisively toward Washington.

The United States’ Pacific allies are reaching out to each other as well. Earlier this month, Japan and Australia signed an agreement to cooperate more closely on defense. This agreement is the first such defense pact signed by Japan with any country other than the United States.

Meanwhile, Beijing is floundering to find allies. China certainly has close “friendly relations” with a few countries like Pakistan, Burma (Myanmar), and Thailand—they happen to be Beijing’s biggest arms customers. It has only one official military ally, however: North Korea, with whom it has a mutual assistance treaty.

At the same time, Beijing-Pyongyang relations are very much a case of the tail wagging the dog. China is just as disquieted by North Korea’s nuclear weapons program as any other nation, but it lacks any real leverage over its junior partner. Rather, fear that the Kim regime in the North might collapse—resulting in South Korean and perhaps even U.S. troops on China’s borders—is enough to keep Beijing from pushing North Korea too far.

So North Korea is hardly an attractive military partner, but then again who would want to be a military ally of China, anyway? Weaker nations generally align with stronger ones to “buy” security. But what kind of security can China provide? Chinese military aid would be negligible, and its ability to come to the defense of an endangered ally are limited.

Yes, Russia and China have a budding cooperative military relationship, exemplified by their growing number of joint military exercises. But this relationship is not a mutual defense pact, and neither country is pledged to come to the aid of the other in the case of conflict.

Military alliances are usually formed in opposition to some kind of threat. Consequently, a Chinese-centric military alliance would essentially require states to join in a rivalry with the United States. That presumes, however, that currently nonaligned countries in the Asia-Pacific—such as Indonesia, Malaysia, or Burma—would be prepared to openly align themselves with Beijing in a competition with the United States, or that U.S. treaty allies such as Pakistan and Thailand would explicitly switch sides and embrace Beijing.

It is hard to see the appeal of such a deal. In the first place, many countries in the Asia-Pacific would prefer to stay out of formal alliances and instead play the game of tactical, ad hoc coalitions that advance their individual security.

Secondly, the Chinese regime is increasingly viewed by other countries in the Asia-Pacific as the cause of—rather than the solution to—regional tensions and insecurities. Instead of joining with China, most nations in the region are actively hedging or balancing against it. The regime’s aggressive behavior in places like the South China Sea does it no favors.

Of course, China doesn’t need allies; its military is already quite proficient in the region (and getting more so every day). But as more countries in the Asia-Pacific align themselves militarily against China, the harder it will be for China’s military to operate with impunity.