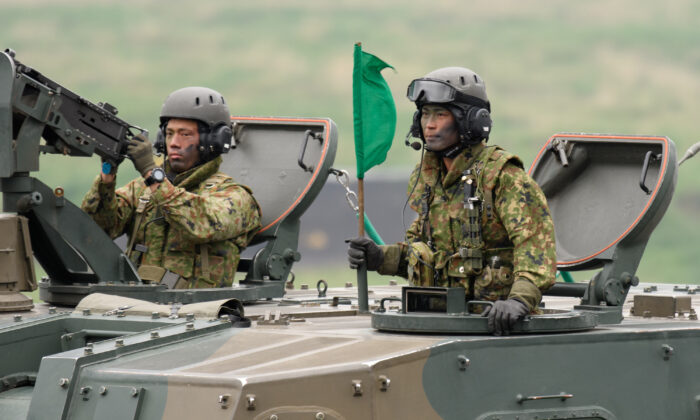 Japan Gets Serious About China

China is a growing military challenge to its neighbors, one that is expanding in terms of size, capabilities, and quality. Nowhere has this growing insecurity regarding China been more self-evident than in Japan.

Beijing is increasingly hardline and assertive in pushing its regional great-power objectives, largely because its improving military permits such an aggressive approach. It is, quite simply, the foremost military threat to the West and to the political-military status quo in the Asia-Pacific region.

A decade ago, Tokyo was much more tolerant of the Chinese regime’s bad behavior. Japan’s 2010 defense white paper noted merely that China’s regional military activities were a “concern for the region,” and that “we need to carefully analyze it.”

Today, the mood in Tokyo is much darker. In its 2021 defense white paper, Japan bluntly accused China of continuing “its unilateral attempts to change the status quo in the East and South China Seas.”

The white paper builds on previous assertions that Beijing is militarizing the Spratly and Paracel islands, expanding naval and paramilitary operations in the South China Sea, and working to increase the operational reach of the People’s Liberation Army (PLA) into the Pacific and Indian oceans. Closer to home, China is increasingly projecting sea and air power near Japan, particularly around the disputed Senkaku/Diaoyu Islands.

Overall, Tokyo argues that China is attempting to “routinize” its air and naval operations in waters close to Japan.

The 2021 white paper is even more explicit when it comes to the worsening security situation around Taiwan. Previous white papers had sought to be more circumspect when it came to Taiwan, preferring to simply state that “the overall military balance between China and Taiwan is tilting to China’s favor.”

Today, Tokyo is much more unambiguous. The 2021 defense white paper bluntly asserts that “stabilizing the situation surrounding Taiwan is important for Japan’s security and the stability of the international community,” and stresses that the situation must be closely watched with a “sense of crisis.”

This point about the central importance of Taiwan’s security was reaffirmed at a July 2021 political fundraiser, when Japanese Deputy Prime Minister Taro Aso stated that a Chinese invasion of Taiwan would constitute an “existential threat” that could prompt Tokyo to exercise its right to collective self-defense.

Despite this recognition of a growing military threat from China, it has taken a while for Japan to react. Japan’s countervailing military buildup has been slow, and it has by no means matched China in terms of size or pace. At the same time, it has become increasingly purposeful.

Both of these actions are intended to “normalize” Japan’s defense policies. This has meant, for example, the acquisition of new offensive capacities on the part of the Japan Self-Defense Forces (SDF) such as precision-guided air-to-ground weapons, like the GPS-guided joint direct attack munition (JDAM).

The new policies also permit Japan to cooperate more closely with allies and other partners, especially when it comes to common security and defense.

More recently, too, Tokyo has begun to bulk up the SDF. It is in the middle of buying 157 F-35 joint strike fighters (JSF), including 42 “B” versions of the F-35, the short-takeoff and vertical-landing (STOVL) variant of the JSF. At the same time, Japan is going full steam ahead on an indigenous “fifth-generation” fighter jet—the X-2/F-3—and even a “sixth-generation” combat aircraft.

Japan’s Air Self-Defense Force (ASDF) will likely replace all of its older combat aircraft (F-15s, F-4s, and F-2s) with up to 350 fifth- and sixth-generation fighters. Such an ASDF would make for a formidable counter to China’s own, modernizing air force.

Those 42 F-35Bs that Japan is buying will most likely be deployed on these ships. In early October, the MSDF conducted its first-ever take-offs and landings of an F-35B from the deck of the Izumo, inaugurating the vessel’s status as a fixed-wing aircraft carrier. Each of these ships will likely carry between 12 and 24 F-35Bs.

If this occurs, then Japan will have its first aircraft carriers since the end of World War II. According to John Venable, a defense expert at the Heritage Foundation, SDF forces operating the F-35B will create a “more diverse set of complications for the PLA” by providing the ASDF with fighter aircraft that would not be dependent on runways and by giving the MSDF sea-based airpower.

The SDF is also adding to its arsenal in other ways, with new maritime patrol aircraft, a next-generation destroyer, an expanded missile-defense capability, and a new medium-range air-to-air missile (being codeveloped with the United Kingdom, a first for Japan).

To pay for all this, Japan’s governing Liberal Democratic Party has raised the idea of doubling the defense budget, from 1 percent of GDP to 2 percent. Of course, such an increase would have to be introduced incrementally over several years. If, indeed, it happens at all, the 1 percent of GDP figure has been more or less baked into Japan’s national defense policy since the 1960s, and public support for a massive increase in military spending may be lacking.

Nevertheless, Japan, driven by growing threats from China (and North Korea), is making slow but inexorable progress in transforming the SDF into a military capable of projecting force and of engaging in collective defense with allies and other partners. Tokyo is to be credited for taking bold steps toward becoming a more effective counter to growing Chinese military power in the region.