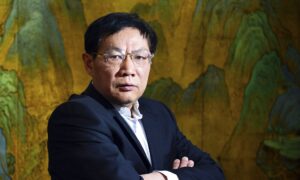 A video released by the Chinese People’s Liberation Air Force on September 19 depicted nuclear armed bombers carrying out simulated attacks on a US Air Force base in Guam. Video was released as the regime carried out its second day of military drills near Taiwan—a move that was seen as a threat to the United States having a diplomatic visit in Taiwan.

Meanwhile, a video has been released showing Chinese soldiers crying as they’re allegedly being transported to the disputed border between China and India. The video was initially posted on Chinese social media app WeChat, but was deleted soon after.

And the Chinese government sent a message in a recent court case that criticizing its handling of the virus can result in lengthy prison terms. A Chinese tycoon was sentenced to 18 years in prison and has been fined around $620,000. He was charged for embezzling public funds, accepting bribes, and abusing power from his position at a state-run company. But the case, and Ren Zhiqiang’s heavy sentence, are being interpreted as being meant to send a message to Party members that criticizing or defying Party leader Xi Jinping will not be tolerated. Mr. Ren had published an essay saying he saw the country’s leader as a power-hungry clown. And soon after his essay was published, he disappeared before facing official charges.