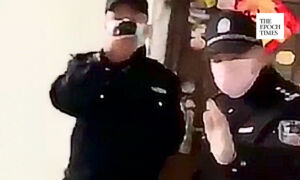 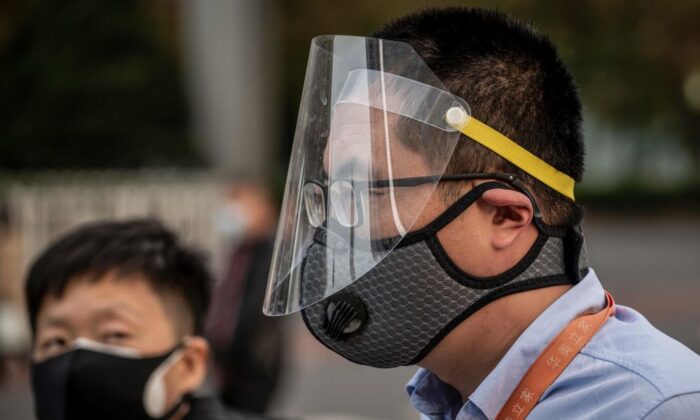 A man (R) wearing a facemask and a face shield commute on a street during rush hour in Beijing on April 7, 2020. (Nicolas Asfouri/AFP via Getty Images)
cover-up

China Should Have Millions of CCP Virus Cases Instead of Tens of Thousands, Report Says

The Chinese Communist Party has underreported its CCP virus numbers, according to a recent report by Washington-based think tank American Enterprise Institute (AEI).

The report, released on April 7 and penned by resident scholar Derek Scissors, concluded that there should be an estimated 2.9 million confirmed cases of the CCP (Chinese Communist Party) virus, commonly known as the novel coronavirus, in China, instead of less than 100,000 known cases currently reported by the Chinese regime.

The estimate was based on reviewing information in a Chinese state-run media report; an infection rate observed in South Korea, where data reporting is reliable; and assuming a conservative number of days during which the virus spread across China before Wuhan was placed under lockdown.

The escalating pandemic began in Wuhan, the capital of Hubei province. Initially, the regime tried to hide the fact that a new form of pneumonia was spreading in Wuhan, by silencing eight doctors, among them ophthalmologist Li Wenliang, after they posted on Chinese social media about the disease.

Eventually, Wuhan authorities locked down the city on Jan. 23, but not before roughly 5 million people—without being screened for the CCP virus—had left the city to travel abroad or to another region of China for Lunar New Year festivities, according to the Wuhan mayor.

In the AEI report, Scissors scrutinized a Jan. 27 article by CGTN, the international arm of China’s state-run broadcaster CCTV, exposing loopholes in the data.

Scissors first questioned a claim in the CGTN article that 1.5 million to 2 million people traveled out of Wuhan and to another region of China before the lockdown was put in place.

He explained that these were overstated figures. There are about 170,000 migrants from a city in the neighboring province of Henan who work inside Wuhan, according to the AEI.

A graphic in the CGTN article also showed the top 10 Chinese cities with flight arrivals from the Wuhan airport. About 465,000 people flew out of Wuhan to these 10 cities between Dec. 30 to Jan. 22.

“If fewer than half a million people flew to those [10 cities] and the most likely top city received no more than 170,000 [referring to the migrant workers], it is unlikely 1.5 million left the [Hubei] province, much less two million,” Scissors wrote.

He then analyzed the extent of infection by people who left Wuhan before the lockdown. He chose to use the infection rate of about 2.3 percent, as reported by South Korea’s Centers for Disease Control and Prevention (KCDC) on April 6.

Using the estimate of 1.2 million—lower than CTGN’s lower estimate of 1.5 million—people leaving Hubei before Wuhan was locked down, Scissors said that there should be at least 27,000 (1.2 million multiplied by 0.023, or 2.3 percent) known cases.

The Chinese regime officially reported roughly 15,200 known cases outside of Hubei as of April 6.

“The level China reports [about 15,200] cases can be generated by cutting South Korea’s already low infection [rate] nearly in half, but there is no justification to do so. Far worse, it would also require Wuhan migrants to have infected no one at all. China’s number is not reasonable,” Scissors concluded.

Scissors said in reality, the duration of virus spread in China is “almost surely longer” than 21 days.

Although the 2.9 million figure is shocking, he encouraged people to consider whether it’s likely that after 1.2 million travelers left Wuhan, it only “resulted in national contagion of a little over 15,000 cases.”