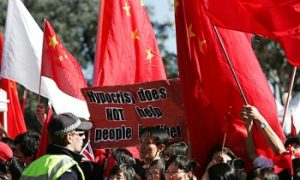 Taiwan Requests to Participate in UN Assembly Amid Pandemic

Amid the COVID-19 pandemic, Taiwan has requested to attend the U.N. General Assembly this year. This bears extra weight to world leaders: Taiwan is one of the few nations successfully dealing with the current health crisis, while the Chinese regime has been criticized by many countries for covering up information in the early stages of the pandemic.

Under political pressure from China, the international organization is likely to exclude Taiwan again from attending the General Assembly, which will be held from Sept. 15 to 30 in New York, United States.

The Chinese regime considers Taiwan part of its territory, despite the fact that the island operates as a de-facto state, with its own democratically-elected government, military, and currency.

Beijing has continually pressured international organizations, such as the United Nations, to accept China’s sovereignty claims.

Since 2013, 92 Chinese-language media outlets from Australia have taken part in the Global Chinese Language Media Forum.

The conference is backed by major Chinese Communist Party (CCP) organs, including the Information Office of the State Council, Beijing’s internet censorship arm; China News Service, the second-largest state-run media in the country; and the Overseas Chinese Affairs Office—which has been accused of influence activities.

The Persecution of Falun Gong Is Included in Performance Appraisal

The CCP has stepped up its efforts to persecute Falun Gong while facing pandemic, floods, economic downturn, food crises, and a total stalemate in international relations. Some CCP’s internal documents that have been exposed a few days ago show that the persecution of Falun Gong has been integrated into CCP’s various political activities, from the assessment of the leadership team, “anti-pornography”, “safety construction”, and “village revitalization”. Even in the strategies of pandemic prevention and control, there are contents related to suppressing Falun Gong.

According to a confidential document issued by the Organization Department of the Fuyang Municipal Party Committee of Anhui Province, the degree of suppressing Falun Gong has been included as the assessment indicators and scoring standards to assess the leadership and the party building of the municipalities and provincial cities in Anhui Province.

On September 9, U.S. Secretary of State Pompeo issued a statement criticizing the People’s Daily, the main propaganda newspaper of the Chinese Communist Party, for refusing to run an op-ed by the U.S. Ambassador to China, Terry Branstad, exposing the CCP’s fear of free speech. This article by Branstad calls on China and the United States to build a more positive bilateral relationship through uncensored discussions and unrestricted interaction.

The article mentioned that the CCP “has urged us to focus on areas of cooperation while setting aside our differences, and for years, the United States had agreed to that approach in the expectation that, over time, we would address our concerns as well. But the Chinese leadership has exploited this approach. Often it has insisted we sweep differences under the table as a prerequisite for engagement. Sometimes it made promises to address our concerns yet failed to follow up.” At the same time, American companies, journalists, diplomats and even civil society have all suffered unequal access in China.

U.S. current affairs commentator Lan Shu said: “The U.S. ambassador [Branstad] did not have any excessive requests. He just asked for reciprocity. The American media should be treated the same way in China as how Chinese media are treated in the U.S. This is the reciprocity. His request is very simple. The CCP has been unwilling to reciprocate. It finds out various reasons, scolds the United States, and talks about all kinds of issues of the U.S. In fact, the United States is a free world.”