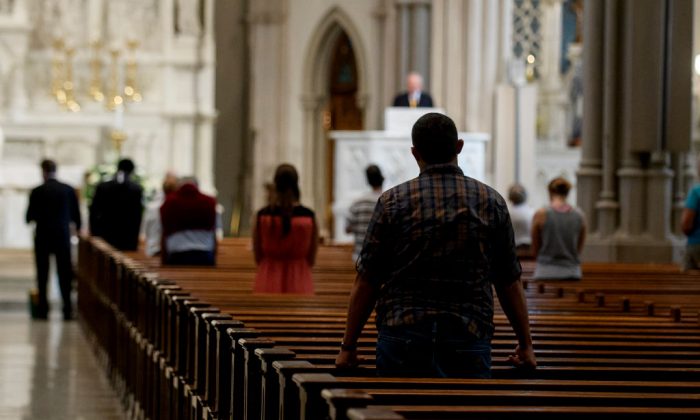 Parishioners worship during a mass to celebrate the Assumption of the Blessed Virgin Mary at St Paul Cathedral, the mother church of the Pittsburgh Diocese in Pittsburgh, Pennsylvania, on Aug. 15, 2018. (Jeff Swensen/Getty Images)
Crime and Incidents

Calls by U.S. Catholics demanding swift and concrete action on allegations of clergy sexual abuse across the United States have grown steadily louder since the release of a horrific grand jury report by Pennsylvania last month.

At least seven states have started investigating these claims, marking an unprecedented new wave of scrutiny and raising broader questions of how Roman Catholic Church officials may have protected clergy and how to best prosecute perpetrators.

Among those pressing for answers as well as action is Michael Dolce, a nationally respected attorney at Cohen Milstein Sellers & Toll, who represents child victims and adult survivors of clergy abuse, among others, and was himself a victim of sexual abuse as a child.

In an interview with The Epoch Times, Dolce repeatedly emphasized a key sticking point in bringing perpetrators of child sex abuse to justice: the statute of limitations. The statute stops prosecutors from having the power to charge someone a certain number of years after a crime is committed. He said it has “prevented many criminal or civil actions from going forward,” calling it the “main legal impediment.”

Pennsylvania’s 900-page report accused more than 300 “predator priests” in Pennsylvania of sexual abuse, and claimed that the clergymen were protected as part of a decades-long cover-up by church officials. At least 1,000 child victims were identified by the report, but many of the identified priests won’t face prosecution because some of the allegations date back up to seven decades.

In 2010, Dolce took on the Catholic Church in Florida, where he is based, and played a leading role in repealing all statutes of limitation for civil and criminal prosecution of child sexual battery. As a result, Florida is the largest state to have passed such legislation.

“Law enforcement in the state of Florida no longer has to worry when somebody comes in and says, ‘Hey, this is what happened to me.’ They no longer have to worry that their investigations become dead in a month, because of an exception in the statute of limitations,” he said.

“I’ll tell you from my personal law practice that I’m able to bring civil claims to support criminal claims. We just tried a case in August that would have absolutely failed under the old law but, based on the repeal, we were able to bring the case forward again, try the case, and win.”

Dolce said church officials in his state actively resisted his efforts to get the limitations lifted. He dismissed arguments from clergy leaders that it would cost them financially, make them lose congregants, or shut down their schools.

“The doom-and-gloom predictions were that liability insurance premiums would skyrocket, certain schools would shut down, we would lose day-care centers and that hasn’t happened. I’m not aware of anything that has closed as a result.”

It’s been almost a decade since the repeal, and the church is still thriving in the state.

He said the repeal helped him in the civil sector to gather evidence or prove cases more easily. “Let’s also keep in mind that the majority of child sexual-abuse victims never disclose publicly what happened.”

“When you look at the number of cases where children are abused in connection with an institution, whether its a school or a church, the institutions can’t really be charged criminally for failing to have a safe environment,” he said. “But in the civil sector, we can expose them for that and provide a financial setup over the failure to protect kids.”

It’s unclear how many states have repealed the statute. Some have made partial adjustments, while others, like Florida, have made a full repeal. Dolce explained how it varies on a state-by-state basis since some choose the age of the victim as the limit, while others adjust the window of time to report the crimes.

“The first thing the Vatican needs to do is instruct every single diocese in the U.S. to stop resisting the repeal of the statute of limitations,” Dolce said. “I don’t know why they haven’t done that.”

Dolce was just 7 years old when he became a victim of sexual abuse.

“One of my neighbors abused me and at least one other child that I’m aware of. It was violent—what happened to me was very violent,” he said. “I was bound and raped before I even knew what that meant.”

Being a victim himself has made Dolce passionate about his work and about standing up for the victims of sexual abuse, sex crimes, and domestic violence whom he represents. He managed to rise from the trauma to be a voice for others, but he said the memory still haunts him.

“[I’m] still affected. You don’t shake that. Do I have a day when I don’t think about it? Absolutely not. Part of that’s from the work I do but … it continues to haunt you,” he said.

“You think about the things that trigger someone. … Any kind of human intimacy can take you back to the first time.”

Dolce said child sexual abuse in the United States is “absolutely an epidemic.”

“I’ve handled cases where my client has been abused 100, 200, 500 times by the same perpetrator. That only gets counted once in the data.”