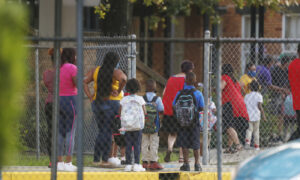 Over 5,500 Students in Quarantine or Isolation Due to COVID-19 in Florida School District
0
Share Now
TelegramFacebookTweetEmailTellMeWeReddit
Copy Link 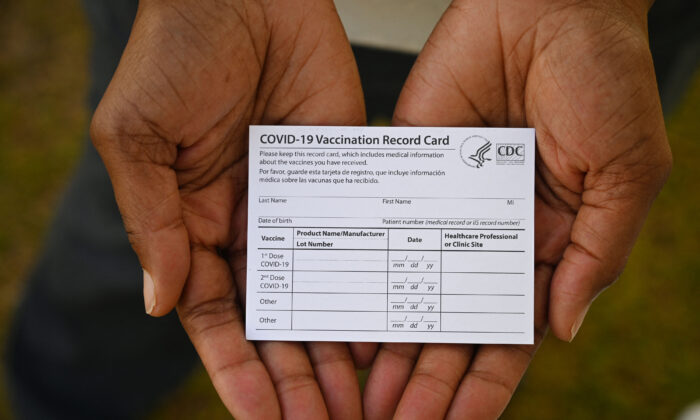 A health care worker displays a COVID-19 Vaccination Record Card during a vaccine and health clinic at QueensCare Health Center in a predominantly Latino neighborhood in Los Angeles, Calif., on Aug. 11, 2021. (Robyn Beck/AFP via Getty Images)
Crime and Incidents

Tangtang Zhao, 34, allegedly sold 125 authentic Centers for Disease Control and Prevention (CDC) vaccine cards for about $10 apiece, said the DOJ in a news release on Tuesday. Zhao is accused of selling the vaccination cards to about 11 different buyers.

Zhao, according to officials, was a licensed pharmacist based in Chicago and obtained the vaccine cards at his workplace. He was charged with 12 counts of theft of government property.

“Knowingly selling COVID vaccination cards to unvaccinated individuals puts millions of Americans at risk of serious injury or death,” FBI Special Agent in Charge Emmerson Buie Jr. said in the statement on the arrest. “To put such a small price on the safety of our nation is not only an insult to those who are doing their part in the fight to stop COVID-19, but a federal crime with serious consequences.”

The case remains under investigation, authorities added. Zhao could face as many as 120 years in prison if he’s convicted, the news release said.

“Stealing and selling COVID-19 vaccination cards is inexcusable and will not be tolerated,” said Special Agent in Charge Lamont Pugh III of the U.S. Department of Health and Human Services. “Fraudsters who engage in such unlawful conduct undermine efforts to address the pandemic and profit at the public’s expense. The health and safety of the public is our top priority, and we encourage people to obtain vaccination cards from their administering medical providers.”

Assistant Attorney General Kenneth Polite Jr. added that the DOJ is taking action against anything that “contributes to the distrust around vaccines and vaccination status,” adding that the Justice Department is “committed to protecting the American people from these offenses during this national emergency.”

In recent weeks, as New York City and several California cities announced they would impose COVID-19 vaccine mandates, there has been a surge in the sale of fabricated vaccine cards online.

Over the past weekend, Senate Majority Leader Chuck Schumer (D-N.Y.) called on the federal government to crack down on fake vaccination cards. He added that buying or selling them is illegal.

Days ago, Border Patrol officers in Memphis, Tennessee, seized a cache of fabricated CDC cards that had originated from Shenzhen, China, and were headed toward New Orleans, officials said.

Zhao made his initial court appearance on Aug. 17 in the U.S. District Court for the Northern District of Illinois, according to local reports. Other details weren’t provided about his arrest by the DOJ.