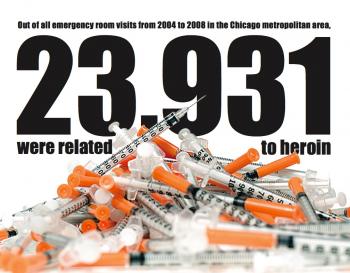 An image saying that in Chicago 23,931 emergency visits in the Chicago metropolitan area, were heroin related. (Holehouse/The Epoch Times and istockphoto.com/stockcam)
US

By Conan Milner
biggersmaller
Print
CHICAGO—The highest concentration of heroin abuse from across the nation can be found in and around Chicago, according to a recent study.

The report, released earlier this week from the city’s own Roosevelt University, finds that there are more emergency room visits and problems related to heroin in Chicago and its surrounding suburbs than anywhere else in the United States.

From 2004 to 2008, the Chicago metropolitan area, which includes Cook and neighboring counties, had the most cases of heroin-related emergency room visits found anywhere—an enormous 23,931 cases in all. During this period, Chicagoland (metropolitan Chicago area) handled 50 percent more cases than New York City, which ranked second, according to an analysis of data from the Drug Abuse Warning Network (DAWN).

The new report, “Heroin Use in Illinois: A Ten Year Multiple Indicator Analysis—1998 to 2008,” found that more Illinois residents seek substance abuse treatment for heroin than for any other illegal substance.

“It’s a problem that goes beyond the city of Chicago, into the suburbs and outlying areas, and for the first time, we have a clearer idea of who in our communities is using heroin,” said Kathleen Kane-Willis, coauthor of the report, in a press release.

Urban heroin users in Chicago were mostly African-American and over 21 years old. Suburban heroin users had different demographics; many were white and young. Many were teens and young adults up to 24 years old, according to the report.

Researchers said that the staggering numbers of heroin cases in the Chicago area are overwhelming Illinois’ public treatment system. Meanwhile, nearly 29 percent of those arrested in Cook County tested positive for heroin in 2008—more than double the rate of arrestees testing positive for the drug in Washington, D.C., which ranked second.