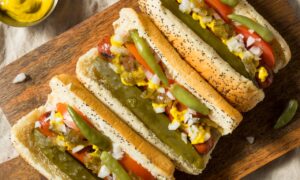 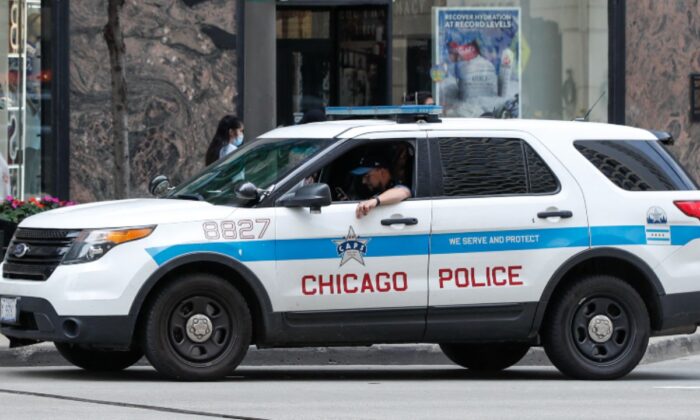 A police car is seen in Chicago, Ill., on June 18, 2021. (Kamil Krzaczynski/AFP via Getty Images)
Illinois

Bail reform has become a hot-button issue in Chicago. Pre-trial detention can take a toll on poor detainees, often minorities, who are unable to post bond and can lose jobs and housing. Lengthy pretrial detentions, especially when detainees are found innocent, have driven the bail reform movement which aims to end what is called “wealth-based detention.” Illinois became the first state to end cash bail in early 2021 but the full measures have not gone into effect yet.

In 2020, Cook County Chief Judge Timothy Evans released a report indicating no increase in violent crime after monetary bail for many pretrial defendants was reduced or eliminated, but the Chicago Tribune questioned the data. More than 2,334 felony defendants were excluded from the data set, reported the Tribune, including a detainee released on a no-cash bond after a felony gun charge who allegedly went on to shoot and kill a city Streets and Sanitation worker.

In July, Cook County Sheriff Tom Dart’s office reported that 100 people charged with murder had been released on electronic monitoring. Matt Walberg, a spokesman with his office, said electronic monitoring is intended for low-level crimes and is “not designed for violent offenders,” reported WBEZ Chicago.

A Rift Between Officials

Bail reform has created a rift between the city administrators and Cook County judicial officials. After Chicago rap star and gang member Londre Sylvester was shot 64 times in an ambush upon his release from jail in July, Chicago Police Superintendent David Brown noted that Sylvester, whose stage name was KTS (Kill To Survive) Dre, or Kutthroat Dreko, had a rap sheet with 22 arrests including a prior gun charge. “It’s incredible that he was eligible for electronic monitoring. It’s madness. It’s making us all less safe,” said Brown. Mayor Lori Lightfoot agreed.

“The lawlessness these gangs bring to our cities is terribly destructive and oftentimes difficult to prosecute,” said Steven Weinhoeft, U.S. Attorney for the Southern District of Illinois, earlier this year about the gang Sylvester belonged to.

Cook County Board President Toni Preckwinkle and State’s Attorney Kim Foxx, however, support the bail reform spearheaded by Evans. The rift is widened by what many viewed as lenient prosecution of rioters following the police custody death of George Floyd. According to the Chicago Tribune, 2,100 businesses were robbed or damaged, amounting to more than $165 million in damages, yet only 157 offenders were charged with felonies.

Re-offending When Out On Bail

There are frequent news reports about people with long criminal rap sheets, including felonies, who commit more crimes after not being incarcerated. The most recent shock in Chicago is the arrest of a suspect in connection with shootings after Chicago’s Puerto Rican Day parade. A driver, Gyovanny Arzuaga, died at the scene and passenger Yasmin Perez a few days later.

Police arrested Anthony Lorenzi, 34, a few weeks later who had fled to San Diego. The suspect had 26 adult felony arrests and seven felony convictions, according to Brown. His most recent conviction was for an armed robbery two blocks from where the Puerto Rican Day shootings occurred.

Brandon Tatum, a former police officer who served six years with the Tucson Police Department including as a SWAT operator and field training officer, created an angry video about the arrest record of the suspect on his YouTube Channel “The Officer Tatum.” “We could fix these things,” said Tatum. “We could get these people off the streets. Our young people won’t be terrorized if we do these things. We put them behind bars for life … to say that black people and Hispanics and minorities get worse, harsher sentences—they are lying to you. This [Lorenzi’s record] is a perfect example. ”

“Liberal cities are just emboldening criminals by not taking these crimes seriously and putting people who kill back out on the streets. Too often wanting to clear the prisons is just virtue signaling,” Tatum told The Epoch Times. “If we need to build more prisons we should. “

Just as important though, said Tatum, offenders need to be provided with much better pathways to return to society, get a job and live a crime-free life. “Probation officers are very overworked and underfunded. They can’t possibly monitor, guide, and follow up all the cases they are given. Anti-crime investments need to be upfront and start with them … before recidivism occurs.

“The problem is not with the police, it is with the justice system. For us to arrest the same offenders again and again—some have as many as 1,000 arrests—ties up police resources.”

Pros and Cons of Bail Reform

“The concept of bond is that the more serious a crime is, the more likely an offender might flee,” Tamara Cummings, general counsel for the Illinois Fraternal Order of Police Labor Council, told The Epoch Times. “Unfortunately [because of no and low bonds] there is a pattern of people with long records being free, even when they have been charged with gun crimes.”

Bail reform, including electronic monitoring, grew in part from the “theory or belief that minorities are imprisoned more,” said Cummings. But it can be problematic. “How does someone who has been victimized feel seeing the alleged perpetrator back on the streets or in the neighborhood? Quick return of suspects to the street can also make those in state’s attorney or sheriff offices feel like they are unable to do the right thing anymore.”

Harold Greenberg, a Los Angeles attorney who taught police science-related classes at California State University and Glendale University College of Law, told The Epoch Times: “The police officer today is either considered a bully or a victim. We have reached the point where a cop is damned if he does and damned if he doesn’t. Misdemeanor arrests aren’t even prosecuted so what is the point? Many are resigning or retiring from police work.”

The problem is political, said Greenberg. Officeholders neither understand fighting crime or “care about the public good which is the basic precept of government. Someone who commits a crime when released from jail should not have been released.”