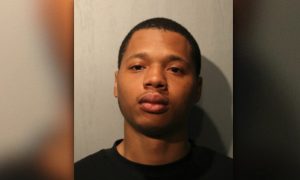 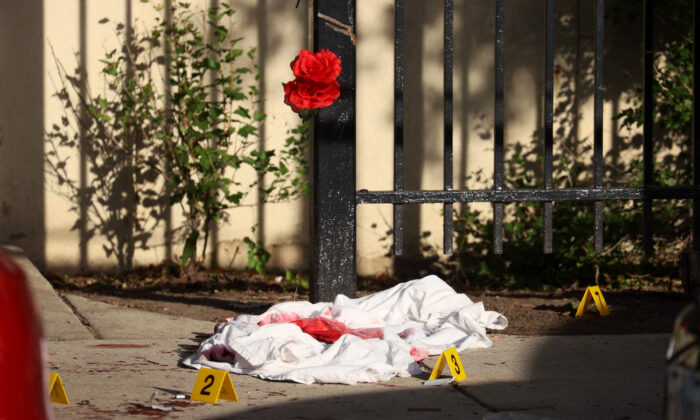 A blood-soaked sheet sits among evidence markers following a shooting where three people were shot at the Wentworth Gardens housing complex in the Bridgeport neighborhood in Chicago, Illinois, on June 23, 2021. (Scott Olson/Getty Images)
Illinois

Chicago continues to be the U.S. poster city for random and senseless violence. During the last weekend of June, 77 people were shot and two mass shootings occurred almost back to back.

Hours after Chicago’s Puerto Rico Day parade on June 19, a Puerto Rican driver and passenger were dragged from their car by a mob after a minor traffic accident and shot execution-style. The spark from the gunfire can be plainly seen in a video before the offenders run off. The slaying resembles a lynching that might occur in a lawless, poor country but not in the U.S.’s third-largest city.

The growing violence has spilled over into Chicago’s downtown “Loop,” where most commerce is conducted and tourists traditionally visit. On June 19, a Maryland graduate student pursuing a doctoral degree in criminal justice was fatally stabbed to death in broad daylight allegedly by a homeless man who police say is connected with other crimes. The next day, in broad daylight, a woman was shot in the leg in a hotel lobby in the same area.

Following a lack of prosecutions by Cook County State Attorney Kim Foxx for post-George Floyd demonstrations in Chicago involving looting and arson, debate about crime statistics in Chicago has become heated. Chicago Police Department figures show that murders in 2021 have increased by 30 percent from 2019, and police Superintendent David Brown admitted at a news conference that shootings in Chicago are up 17 percent and homicide five percent compared to the same time in the past year.

But, Chicago Mayor Lori Lightfoot recently claimed that there was a slight decrease in crime in June and blamed rising crime on COVID-19-related shutdowns of the Cook County court system, an explanation which Chicago aldermen rejected.

The New York Times reported that Chicago’s rise in its murder rate for 2020 “is expected to be around 25 percent, the largest increase in U.S. history, in records dating to 1960” and noted that murder rates were higher in 31 of the 37 cities that cut police budgets.

Anti-Police Sentiment is the Elephant in the Room

“Defund the police” protests and the acrid sentiment behind them have had a huge effect on law enforcement, say experts. Everything from investigations and finding criminals to response time suffers from “drastic budget cuts” Maria Haberfield, a professor of police science, told CNN.

Police officers who spoke to The Epoch Times anonymously because they were not authorized to speak to media, confirmed that the legal and social backlash against police affects policing. “Most people don’t realize how much we are being handcuffed procedurally and legally,” said a Chicago area officer. “Between pension issues, the move to repeal qualified immunity, and lack of public and city support, morale and recruitment have never been lower.”

“We always do our sworn job, but rushing to a crime scene while it is still active or wrestling with someone who is out on warrant and skipped court doesn’t feel so great when we have no public support for doing it,” another officer told The Epoch Times.

Probably a third of Illinois sheriffs are “looking for an exit point” because of the anti-law enforcement climate, said Terry Trueblood, Chairman of Trustees of the Illinois Fraternal Order of Police, referring to the state-wide situation. Illinois state Senator Darren Bailey, a guest on the “Facts Matter Moments” show, agreed. “I can’t imagine what police officers are going through knowing that anytime you ask someone to stop … your hands are tied.”

Criminal justice legislation signed by Gov. J.B. Pritzker in February 2021, Illinois House Bill 3653 or the SAFE-T Act, had been in the works in the Illinois General Assembly but was accelerated after the death of Floyd. The bill was intended to address “systemic racism” in Illinois policing, but a coalition of opponents that included the Illinois Fraternal Order of Police (FOP) State Lodge, FOP Labor Council, FOP Chicago Lodge 7, Illinois Sheriffs’ Association, Illinois State Troopers Lodge 41 and the Illinois Association of Chiefs of Police, called the 764 pages bill “anti-police.” Moreover, coalition members told The Epoch Times that law enforcement had little chance to read the bill and that it was passed in the early morning hours during a so-called “Lame Duck Session.”

“What was so unusual was that none of the FOP saw anything in the bill until the first day of the veto session,” Tamara Cummings, general counsel for the Illinois Fraternal Order of Police Labor Council, told The Epoch Times. For example, a measure that made Illinois the first state to end cash bail was too vague, said Cummings. “A judge would decide if an individual posed an immediate threat but threat was linked to a specific person and not the public in general so the threshold was too high.”

Another problem, Cummings said, was a provision in the bill that did not allow a police officer to view body camera footage before writing a report when deadly force was used. “If anyone thinks an officer can write an accurate report after deadly force” without viewing the footage, they are mistaken. As an example, she cited the May killing of Champaign, Illinois police officer Chris Oberheim during a domestic violence call. “How could Officer Oberheim’s partner who was also wounded in the attack write an accurate report from such a traumatic incident?”

Bill 3653 “ties the hands of police officers while pursuing suspects and making arrests and allows criminals to run free without bail,” said the coalition. “In the dark of night, Illinois legislators made Illinois less safe.”

Resistance to Bill 3653 from law enforcement continued after the bill’s passage. Activists including Terry Vorderer, a former Oak Lawn police officer, encouraged Illinois residents to contact their respective state lawmakers to request a “trailer bill” that would incorporate concerns of the law enforcement community into HB 3653 before it took effect July 1. On June 25, Pritzker signed the trailer bill.

Ed Wojcicki, executive director of the Illinois Association of Chiefs of Police, noted that HB 3653 was rushed through the legislature and beat “the end-of-session deadline with only 30 minutes to spare.” He told The Epoch Times he was pleased with the passage of the trailer bill. “We supported it because it fixed many of our most egregious concerns, and we appreciated the negotiations led by Sen. Sims and Rep. Slaughter, which led to a good trailer bill.”

A relationship between state and local governments’ support of police and effective law enforcement exists, according to most experts. After the 2014 shooting of Michael Brown in Ferguson, Missouri the concept of the “Ferguson effect” was introduced, suggesting that increase in crime is connected to less proactive policing due to community distrust and hostility toward police.

According to Rashawn Ray, a sociologist and fellow at the Brookings Institution, even without an outright abolition of a police department, fewer resources and officers on the street have an effect on community safety. The National Police Support Fund reports that after defunding measures, homicides in Minneapolis increased by 60 percent, and in Atlanta homicides soared to their highest numbers ever.

Young officers are leaving Chicago “and going somewhere else, whether it’s a suburb or out of state all entirely,” John Catanzara, head of Chicago’s Fraternal Order of Police, told The Epoch Times. Some say they have just had enough, he said. There also continues to be friction between the Fraternal Order of Police and Mayor Lightfoot and Police Superintendent David Brown.

“I do feel the value of proactive policing has been lost; you do not have to be a social scientist to see there is [a] link between handcuffing the police force and a rise in crime,” Cummings told The Epoch Times.