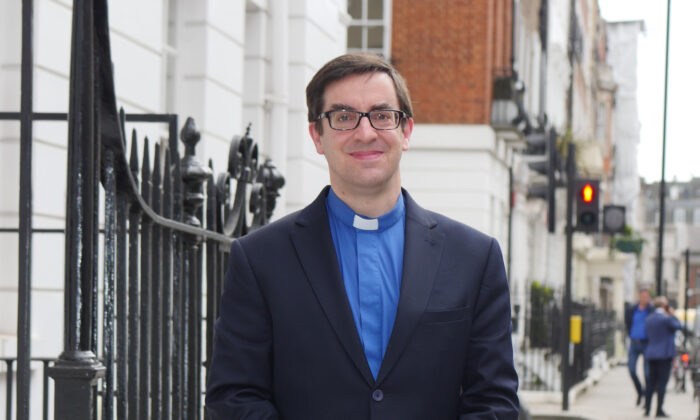 A Christian chaplain who was forced out of his job and reported to a terrorist watchdog for giving a sermon defending the right to question LGBT ideology claims he was also then blacklisted as a safeguarding risk to children by the Church of England (CofE).

Rev. Bernard Randall, 49, from Derbyshire, a former chaplain of Christ’s College, Cambridge, is taking Trent College in Derbyshire to an employment tribunal over alleged religious discrimination after he was sacked by the fee-paying CofE school and reported to a government terrorism watchdog.

Anglican deacon and broadcaster Fr. Calvin Robinson told The Epoch Times by email that it was “awful the way Rev. Randall had been treated” but that many clergymen are stifled by “woke hierarchy.”

“The woke activists who have captured much of the CofE cannot tolerate any opposition to their agenda, even moderate and considered opposition which encourages debate,” said Randall, who is ordained by the CofE, in a statement.

He said that he initially expected support from the church, but instead found that he had been marked as a “risk to children” by church officials for “expressing, moderately” the CofE’s own teaching on human sexuality in a CofE chapel.

In 2019, Randall was disciplined and lost his job as a chaplain at Trent College after preaching a sermon that presented the Christian viewpoint on gender identity and LGBT ideology.

He is claiming £120,000 ($138,000) in damages at an employment tribunal that begins on Monday, arguing that Trent College unfairly sacked him because of his religious and philosophical beliefs.

Randall said he had presented the traditional Christian view of human identity and sexuality and told students that they were not compelled to “accept an ideology they disagree with” but should debate and make up their own minds about the issue.

The school reported Randall to Prevent, the government’s counter-terrorism watchdog, after he raised concerns at the school about an external LGBT group, Educate and Celebrate, that had encouraged school staff to chant “smash heteronormativity” at a training session.

Police subsequently said that they found that it did not meet the threshold for a Prevent referral, and no further action was taken and no case was recorded on the force system.

His legal team, represented by Christian Concern, alleges that the Bishop of Derby, the Rt. Rev. Libby Lane, refused to allow him to officiate in Church services, and argue that this is an act of discrimination, harassment, and a breach of the Equality Act 2010.

He also claims that he was told that he was a “moderate risk to children” and vulnerable adults in a risk assessment undertaken by the Church of England’s safeguarding team in the Diocese of Derby.

His legal team claims that a Data Subject Access request revealed that a senior member of Derby Cathedral suggested that there would be “implications” for anyone associated with the cathedral if they publicly supported Randall in his legal action. They also claim that internal emails revealed cooperation between Trent College and the Diocese of Derby to ensure Randall could not officiate again in the region.

He is also taking separate legal action against the bishop of Derby and the CofE.

Fr. Calvin Robinson joined the breakaway conservative Global Anglican Future Conference this year after he was cancelled by the CofE because white senior clergy were fearful that he refuted claims that Britain is “institutionally racist” even though he is black.

“It’s awful the way Rev. Randall has been treated. The State Church is so afraid of being politically incorrect, it now deems its own teaching as a safeguarding risk. It’s absurd,” he told The Epoch Times.

“There are many fantastic clergymen being silenced and stifled by a woke hierarchy. I pray for their liberation,” he added.

Commenting in a statement, Randall said that it had been a “hostile, traumatic and deeply stressful” experience and that “safeguarding” had been weaponised against what the Church believes to be a difficult voice.

He experienced what he described as “Stalinesque” interrogations in which he was told that refusing to capitulate to the allegations and to deny his beliefs made him a risk.

“I do not believe delivering a sermon can be a safeguarding issue. I did not think anything I said was wrong. I certainly didn’t make personal attacks. I was told by the safeguarding team at Derby diocese that my sermon and my views, based on C of E teaching, could potentially cause someone anxiety, as if that is abuse,” said Randall.

“If the Church of England believes that its own teaching based on the Bible is a safeguarding risk then what does this say about what state it’s in?” he added.

The Epoch Times contacted Trent College, the Diocese of Derby, and the CofE for comment.