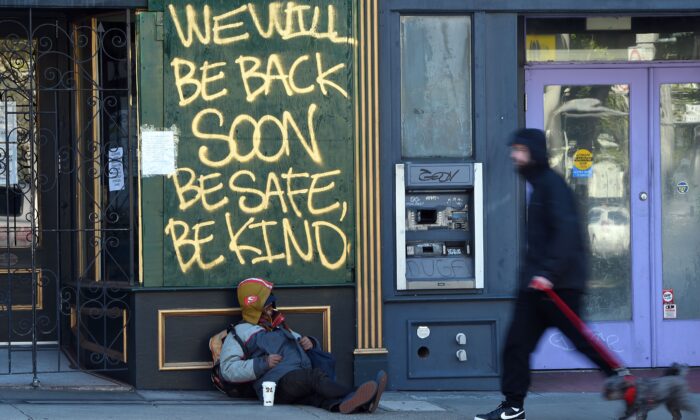 A man walks his dog past a homeless man sleeping under a message painted on a boarded up shop in San Francisco, Calif., on April 1, 2020. (Josh Edelson/AFP via Getty Images)
US Real Estate

When Tony Bennett first crooned “I Left My Heart in San Francisco” in 1962, no one had any idea that the popular “City by the Bay” would one day become an urban center so wrought with skyrocketing home prices, crime, and homelessness that even longtime residents are now joining an ever-growing exodus.

After living in the region for 37 years, Scott Fuller pulled up stakes and moved to Gilbert, Arizona, where he, along with his wife and two children, are now enjoying a much better quality of life. Five years ago, he founded LeavingTheBayArea.com, a unique consulting firm dedicated to helping Bay Area residents relocate to other areas within California or to surrounding states.

A real estate broker for more than 20 years, Fuller said the timing was right when he started the company in 2016.

“I wanted to make sure there was no question about what we do, so that’s why I chose the name ‘Leaving the Bay Area,’” he told The Epoch Times.

Fuller began to notice a slow exodus from San Francisco about seven years ago, and realized that there was no single company dedicated to providing full-service relocation assistance. Working in partnership with real estate professionals throughout the country, the company now offers everything from selling and moving services to researching new locations, buying, utility connections, and even mail forwarding.

“As things started to snowball over the past couple of years, people have had a lot of concerns like affordability, taxes, congestion, crime, and homelessness,” he said. “The area has changed a lot from the California that I knew growing up here.”

A December 2021 report by the California Policy Lab found that the migration to California from other U.S. states dropped 38 percent since the start of the pandemic in 2020. San Francisco had the deepest decline at 53 percent, while exits from the Bay Area increased by more than 21 percent. Overall, the report found that some 60,000 people left the state in the first quarter of 2020, and that number more than doubled by the third quarter of 2021, with more than 150,000 exits.

A fourth-quarter 2021 poll by Joint Venture Silicon Valley indicates 56 percent of respondents are planning to leave the Bay Area within the next few years, and 75 percent identify the cost of housing and homelessness as the area’s most serious problems. Overall, 71 percent believe the quality of life there is worse than it was just five years ago.

A similar poll conducted last summer by the San Francisco Chamber of Commerce shows more than 40 percent of residents surveyed plan to move from San Francisco in a few years. Eight out of 10 respondents say crime has gotten worse, while close to 90 percent believe the homeless crisis is flourishing. Almost 75 percent of those polled say their quality of life has declined over the past year.

Screeching headlines over the past year have detailed the rash of daytime burglaries of high-end retailers, as well as other stores and small businesses throughout the Bay Area, while countless photos and news videos continue to depict an expanding homeless population in the city.

According to the San Francisco Police Department’s Crime Dashboard, at the end of 2021, larceny theft was up almost 20 percent from 2020, with 30,406 incidents reported.

“I think a lot of people feel that the state is going in the wrong direction,” Fuller said.

Respondents to the Joint Venture Silicon Valley survey are split on the overall direction of Silicon Valley and the greater Bay Area: 52 percent say it is on the wrong track, while 48 percent say the region is headed in the right direction. While 71 percent responded that the region is good or excellent for pursuing a career, 89 percent believe the area is poor or just fair for purchasing a home. Zillow lists the current median home sale price at $1.5 million for the San Francisco region.

For Fuller and his family, the move to Arizona has resulted in a “100 percent” better lifestyle.

“The housing is more affordable, taxes are lower, there’s less government regulation, and people are a lot less stressed-out and happier,” he said.

Many of his clients are nearing retirement age, while others are younger professionals who are now working remotely because of COVID-19. Some of the more popular destinations include Arizona, Idaho, Montana, Nevada, Utah, New Mexico, Texas, and Florida.

Eric Thomas lived in the Bay Area for 52 years until he and his family left last year. He cited the cost of living, public policy, high taxes, crime, and traffic as some of the main reasons for leaving.

“There was also an over-restrictive handling of the COVID-19 pandemic and related enforced mandates,” he told The Epoch Times.

The Thomases’ new home is in North Texas, near the Oklahoma border.

“We absolutely love the people here and feel safe,” he said. “We live in a small town where everyone is friendly and helps one another.”

The family also was able to purchase a home twice the size of their former one, for nearly half the price.

Another client, Matthew Cooper, relocated to Montana last year after living in the Bay Area for more than 40 years.

“We were so glad to escape the area,” he told The Epoch Times. “We saw how things were going with crime waves and homelessness—it was a breakdown of law and order in society.”

Now, Cooper, his wife, and three girls live on 21 acres in Montana. The property includes their own large home and a guest house, and the cost for everything was just $650,000—less than half of the cost of a Bay Area home with little land.

“Up here, everyone we’ve hired and everyone we’ve met has been a freedom-loving patriot,” Cooper added. “It’s been wonderful to be in a community of like-minded people.”

Recently published reports indicate that San Francisco Mayor London Breed now is promising to get tough on crime, announcing new policies to battle drug use and dealing, as well as theft. The plan would also include overtime funding for police presence in the Tenderloin district.

A statement posted on the City of San Francisco’s website last month also touts the state of California’s $54.7 million grant for the city to purchase a 160-room residential building on Mission Street as permanent supportive housing. This follows a 2020 Homekey grant for $76.89 million for the purchase and operation of Hotel Diva and Granada Hotel. The acquisitions are part of Breed’s Homelessness Recovery Plan.

The San Francisco mayor’s office didn’t respond by press time to several emails from The Epoch Times seeking comment, as offices are currently closed due to COVID.

Meanwhile, LeavingTheBayArea.com is growing substantially, with Fuller and his team fielding inquiries daily.

“People have their breaking points, and a lot of that does revolve around politics,” he said. “Sometimes, it just becomes too much.”