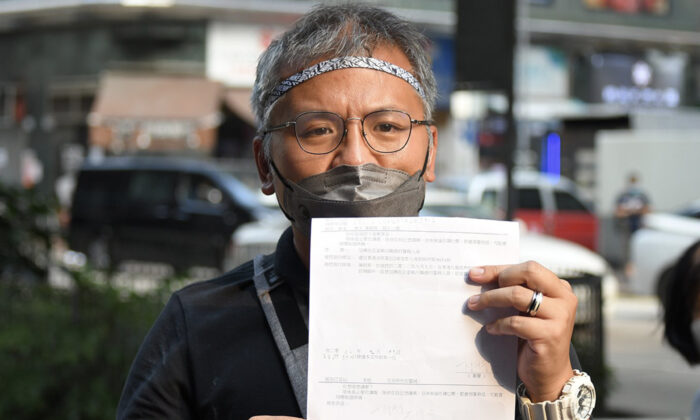 Ronson Chan Ron-sing, the Chairman of Hong Kong Journalists Association, met reporters after leaving the Mong Kok Police Station at the afternoon on Sep 19, 2022, and said that the police formally accused him and the case will appear in the West Kowloon Magistrates' Courts at the afternoon on Sept. 22. (Big Mack / The Epoch Times)
HK Current Affairs

Chairman of Hong Kong Journalists Association Accused of ‘Obstructing Police Work,’ Due to Appear in Court

According to the 2022 World Press Freedom Index, released by the Reporters Without Borders (RSF), the international non-governmental organization, Hong Kong ranked at a record low. It had fallen the furthest of any country from 80th place in 2021 to 148th place in 2022.

Ronson Chan Ron-sing, the chairman of the Hong Kong Journalists Association, was arrested on Sep 7  for “obstructing police’s work, and misconduct in a public place while being on duty.” He was released on bail on the same day but was requested to report back to the police station on Sep 21.

On Sep 19, the Mong Kok investigation team, who had investigated his case earlier, contacted him and asked him to go to the police station to collect the indictment that afternoon.

When Ronson arrived at the police station around 3:40 p.m., he was surrounded by a large number of media immediately.

He was told the case would appear at the West Kowloon Magistrates’ Courts on Sep 22.

Ronson actually has planned to participate in a fellowship programme at the Reuters Institute at the University of Oxford in October.

He admitted that the itinerary would certainly have an impact, “if they don’t let me go, my itinerary on Sep 29 would be delayed.”

But it still depends on the development of the case. Later, he will apply for bail to the magistrate, “let the magistrate decide.”

He also pointed out that the University of Oxford expressed that “they will support him no matter what happens.”

He was asked by a reporter if he felt that the police had deliberately stopped him. Ronson said he had heard many unverified reports and speculations after the Sep 7 incident.

But if the police obstructed him deliberately and prevented him from going to the UK, “I think it’s ridiculous. For instance, if I was reporting on the streets of Beijing, and I was interrupted by the mainland China national security and police officers to stop the interview, but even (the police officers) didn’t arrest me for this reason (and forbid me from reporting). What environment are the Hong Kong reporters facing? I think everyone can see from this incident.”

HK Police: ‘HK Journalists Association is a Piece of Trash’

Ronson was intercepted by the police before interviewing at the home owners’ committee meeting of Long Ping Estate at the MacPherson Stadium in Mong Kok in the morning on Sep 7. He was later arrested on suspicion of obstructing police officers and disordering in public places, and was granted bail of HK$ 500 (approx. US$ 64).

Ronson mentioned that after the police officers took him to the police vehicle, they kept pressing his hands, leaving bruises on his wrists. He pointed out that the police officers even swore to him “let’s see when you die and Hong Kong Journalists Association is a piece of trash.”

He emphasized that he only wanted to know the identity of the policeman when he was intercepted and checked, but the policeman did not take the initiative to show his warrant card and explain his identity. And he reiterated that he did not think his request was excessive.