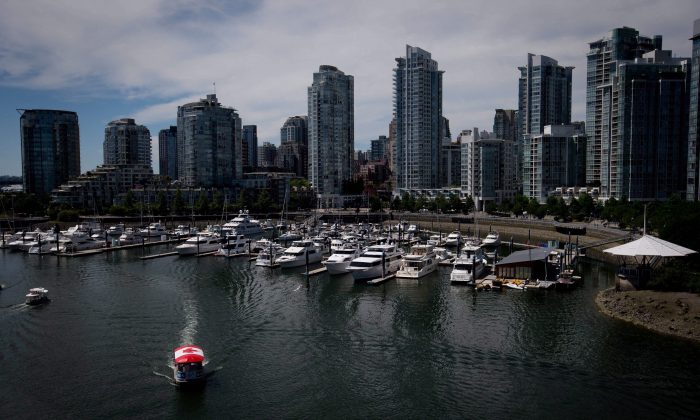 Vancouver’s housing market is one of Canada’s hottest and possibly most overvalued. (The Canadian Press/Darryl Dyck)
Business & Markets

Chance of severe impact from housing correction has decreased, says Bank of Canada
By Rahul Vaidyanath

The Bank of Canada again sounded the warning of elevated household debt levels on Wednesday, Dec. 10, when it released its December 2014 Financial System Review (FSR). The good news is that, while household financial stress causing a sharp decline in house prices is the primary risk to stability in the financial system, the probability of it materializing has gotten lower in the past few months.

The semi-annual FSR serves to raise awareness of key vulnerabilities to Canada’s financial system and what could trigger the risks. The four key risks identified are the same as in June’s FSR, with the other three being a sharp rise in long-term interest rates, weakness in the euro area, and weakness in China causing, broadly speaking, “financial stress” in Canada.

The elevated level of household debt relative to disposable income has been a serious concern for policymakers in Canada for some time. The FSR added granularity to this problem, examining the make-up of the indebtedness and how it is evolving.

A housing correction due to people unable to service their debt due to a decline in income (loss of employment) is how this risk could play out—and it could be severe.

Putting things in perspective, a Dec. 2 household credit report by CIBC noted outstanding household debt rose by 4.3 percent year-over-year, but this is a tame number when compared to pre-financial crisis times.

Also according to CIBC, mortgage arrears are trending downward and are at a six-year low. Atlantic Canada, a part of the country with weaker economic performance, has double the national average, while Ontario has the lowest arrears in the nation.

“We never expected housing imbalances would simply go away by themselves,” Bank of Canada Governor Stephen Poloz said in a news conference after the release of the FSR. As the economy improves, the probability of a severe impact of a housing correction decreases.

“The economy is gathering strength, it’s beginning to rebuild itself. It’s going to create new jobs and income is going to go up and all those kinds of metrics are going to start to look better,” Poloz said. “And so the sustainability of the housing market will be buttressed by that.

“That’s our main source of reassurance from this.”

A worry for the Bank comes from the lending side helping borrowers layer on debt. Citing “anecdotal evidence,” the Bank suggests borrowers may increasingly be borrowing from non-federally regulated lenders to supplement down payments and avoid mortgage insurance. Also, the amount of uninsured mortgages has moved sharply higher since a cap was set on the aggregate amount the government would insure in 2013.

This Time Is Different

The FSR illustrated what’s different about the run-up in house prices this time as opposed to those preceding the housing declines in the early ’80s and early ’90s.

The difference also supports the hypothesis of a soft landing. For the downturns in 1982 and 1991, the Bank of Canada was fighting inflation, which isn’t the case now. In fact, despite inflation being above target for several months now, the central bank believes the factors behind its somewhat elevated level are temporary.

With 95 percent confidence, the Bank’s new model estimates house price overvaluation to range between 10 and 30 percent. It doesn’t get more granular than that and is based purely on demand conditions for housing (disposable income and long-term interest rates); it doesn’t factor in the supply side.

The Bank’s model also suggests housing has been overvalued by more than 10 percent since at least 2007. A graph of the overvaluation shows the run-up in overvaluation was much more rapid leading up to the housing declines of the early ’80s and early ’90s. This would suggest a soft landing this time.

According to Poloz, the probability of a housing correction as suggested by the model is, “really low compared to those other historical episodes and it actually looks like it’s falling.”

But calls for a soft landing have been coming for some time now. Due to interest rates moving lower during the summer, fuel has been available to sustain price increases and resale activity. House prices have gone up by 5 to 6 percent this year, which is higher than income growth and inflation. Existing home sales now exceed their 10-year average.

According to Canada Mortgage and Housing Corp.’s November Housing Now report, “At the national level, other than a modest amount of overvaluation, we did not detect problematic conditions.” For cities like Vancouver and Calgary, which have outpaced home price increases in the rest of the country, prices are supported by local growth in personal disposable income and long-term population growth, CMHC says.

Looking ahead, mortgage loan growth is expected to slow and mortgage losses are expected to remain low too, according to the Canadian Association of Accredited Mortgage Professionals. The pace of house price appreciation and sales activity is projected to slow. Its survey conducted in October also made the point that, for most borrowers, rising interest rates appear to be manageable.

A housing crash akin to what the U.S. went through is highly unlikely in Canada for a few reasons. Canadians can’t walk away from their mortgages, as is the case in some states since nearly all mortgages are full-recourse loans. Underwriting standards in Canada haven’t allowed the proliferation of subprime loans and the federal government is backstopping much of the housing finance system through mortgage insurance.

“[These financial stability risks are] a natural consequence of an extended period of easy monetary conditions,” Poloz said. In “normal” situations, such conditions wouldn’t last for years as they have, but the low-for-long interest rates have propped up the housing market as a consequence of encouraging people to borrow and spend now as opposed to waiting.

Poloz was also quick to point out that the Bank of Canada’s first priority for monetary policy is the inflation outlook and that it would be up to the government to deal with measures to tighten the housing market. Finance minister Joe Oliver’s most recent tones haven’t shown the concern his predecessor the late Jim Flaherty did when mortgage tightening rules were implemented in the summer of 2012.

So for now, one can expect ongoing monitoring of the housing market as a significant risk while the probability of a sharp correction diminishes as the economy improves.