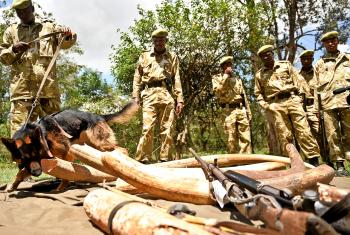 Members of the Kenya Wildlife Service investigate ivory and wildlife animal skin on November 30, 2009. Poaching and the sell of endangered animal meat is still a large problem in Africa. (Simon Maina/AFP/Getty Images)
Africa

By Peter Valk
biggersmaller
Print
In an attempt to preserve endangered animal species in Cameroon, the Ministry of Forestry and Wildlife has authorized the sale of wildlife meat, or "bushmeat," on designated markets. The government hopes to get a grip on the rampant selling, trading, and trafficking of bushmeat in Cameroon.

The authorization of the bushmeat sales on designated markets will allow sellers to distinguish themselves from those that are illegally trading in seriously endangered wildlife species.

"Wildlife species such as apes and elephants have become a consumers item whereby men with guns scour the forest in search of commercial gains through indiscriminate killing of game for bushmeat trade," said Davis S. Wilkie, a renowned conservationist, in a press release on Feb. 17.

He adds, "The bushmeat consumed across the Congo Basin may exceed 1 million metric tons per year, the equivalent of almost four million cattle."

It has been 16 years since the government implemented a law that protects certain endangered species in Cameroon, such as chimpanzees, forest elephants, and river gorillas. But truly rooting out the killing on a large scale has proven arduous as the illegal trade is tightly connected to the country’s economic and political stability and corruption reaches high into the political system.

The unregulated sale of meat has made it difficult for the government to keep track of its reach. “All along wildlife traders have been going about selling bushmeat illegally along the highways and in hidden commercial corners, thus making control by government agents almost impossible.” said Cameroon Forestry and Wildlife Minister Elvis Ngolle Ngolle in a press release.

“Those who have bushmeat to sell, should sell the meat within the bounds or limits of markets which have been designated by the authorities concerned," said Ngolle. "That way, our delegates, our control teams will go to those markets, control the meat that is there and at the same time ensure its health conditions."

The Last Great Ape (LAGA), a wildlife law enforcement organization which fights “the commercial poaching with its related trade of protected species,” applauds the decision to regulate the bushmeat trade.

“I believe that it will go a long way to start better enforcement of the wildlife law for the benefit of all; the benefit of wildlife in the country and the benefit of the sellers themselves,” said Ofir Drori, director of LAGA, which has been in operation since December 2002.

Recently, LAGA exposed an illegal ivory workshop after observing its activities for a month. The workshop was processing large amounts of fresh elephants’ tusks into chopsticks and other articles for the Chinese market. The police seized 256.3 pounds of ivory with an estimated value of $12,000. Two major dealers were prosecuted in the bust.

On a daily basis LAGA employees face threats, violence, and widespread corruption. LAGA documents bribing attempts in 85 percent of their field arrest operations and in 80 percent of all court cases.

Arresting dealers that sell bushmeat on the street is like going after “the little fish” says Drori. “This [bushmeat trade] is a very organized trade and we hit the big guns.”

Not all their targets have been "little fish," however. In the past LAGA’s efforts even led to the removal of a secretary-general.

The hunting and trading of bushmeat is ingrained in the society to the extent that it has become the sole source of income for many local residents. The government has set up projects to reeducate these people and is even offering alternative ways to make a living. Drori says that it is in fact the rich people that benefit from the illegal trade, whereas the poor are exploited.

LAGA’s focus is on protecting endangered animals rather than on just curtailing the bushmeat trade. The term “bushmeat” has been mixed up by some NGO's since the meat of cane rats and other rodents are now also seen as such. But these meats are an important protein source for forest people, and rodents are not endangered animals.

Meat from the endangered species is sometimes used in black magic rituals and is believed by some to possess magic powers. Typically, however, it is used as an exclusive commodity similar to caviar, becoming a status symbol among the rich. It is rarely eaten by locals and is rather sold to the African elite or exported to foreigners.

Since sales of the bushmeat often skip the local market, “The trade in chimps gorillas, elephant meat, etc. is mostly underground and doesn't really need a market to exist,” said Drori.

The illegal trade ivory is currently at its peak. Much of the ivory is exported to China and Japan, but some also makes its way to Europe—France and Italy in particular.

“The irony is that the U.N. Convention on Trade in Endangered Species( CITES) has chosen, in a time like this, to further loosen the ban on ivory and decrease the international protection on elephants,” says Drori.

Often "hunting safaris" are used as a cover to ship lion and leopard skins to Europe. But there are collectors all over the world, and even the zoo industry is partly responsible for the deplorable state of those species, said Drori.

The Western African Black Rhino was declared extinct by the International Union for Conservation of Nature in 2007. The number of lions, elephants, and apes—particularly the cross river gorillas—in Cameroon and its neighboring countries are also decreasing rapidly.