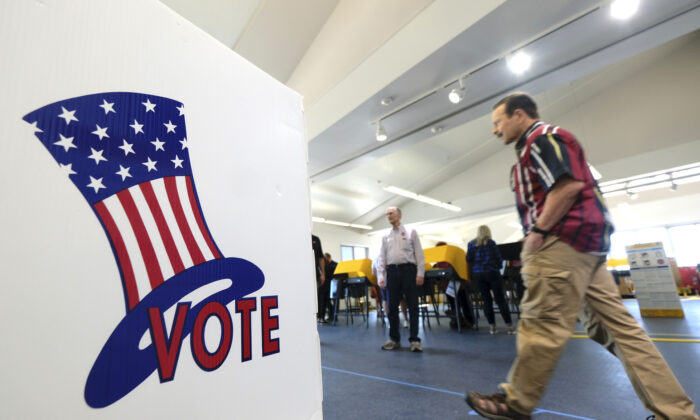 More than 1 million ineligible people remain registered to vote in California, which is a concern ahead of the November elections, says a citizen watchdog group.

The state agreed to settle the case in January 2019, and to comply.

EIPCa Chief Analyst Ellen Swensen told The Epoch Times on March 30 that while some counties have made strides to clean up their voter rolls, many still haven’t.

“How can you have more [voter] registrations than people who are eligible? That’s a very clear indicator that they’re not maintaining the voter lists that they’re supposed to according to federal law,” Swensen said.

According to EIPCa, a recent review of the statewide voter database, VoteCal, shows that 13 counties have more registered voters than eligible citizens.

The six counties that have the most ineligible registrants are Los Angeles, San Diego, San Mateo, Solano, Santa Cruz, and Ventura.

Los Angeles County was the worst, with more than 850,000 ineligible registrations. The other seven counties are Santa Clara, Imperial, Nevada, Plumas, Lassen, Marin, and Siskiyou.

“When you have people on the rolls who shouldn’t be there—they’ve either died, moved away, or haven’t voted in many, many years … those people can be easily impersonated because there is no voter I.D. in California,” Swensen said. “That’s what our concern is.”

The issue of inactive voters on the rolls is also a big one. Registered voters who have not participated in two federal elections are supposed to be removed from active voter rolls, according to the National Voter Registration Act.

Though the “inactive” and “ineligible” voters aren’t exactly the same group, they do overlap.

Inactive voter registrations often belong to people who have moved to another county or state or have died—these are ineligible voters. But some belong to eligible voters who simply haven’t voted.

Counties are supposed to keep an eye on inactive voters and determine whether they are eligible or not, and then clear the ineligible ones from the roll.

Yet there are more than 1.5 million inactive voters still on the roll in LA County alone. Hundreds of thousands of them have been inactive since before 2008.

In the 2019 settlement, LA County Registrar of Voters Dean Logan agreed to mail out cancellation notices to those inactive voters by the end of February 2019.

In past mailings, the county had failed to use the proper legal language on its postcards. So it then had to resend the notices again with the correct wording to everyone, and the requirement of two election cycles starts all over again, Swensen said.

“So it’s a long process,” he said. “The clock is ticking … so we’re going to keep the pressure on.”

The settlement required California Secretary of State Alex Padilla to see that all 58 counties in California update their voter rolls.

“The secretary of state agreed to bring back the proper application of federal law, and his role was to basically revise the manual that all the counties use and make it very clear what the Supreme Court interpretation is of the [National Voter Registration Act],” Swensen said.

“They’re in compliance right now in terms of what they are supposed to have done, but we continue to monitor them.”

Even so, EIPCa President Linda Paine said the list of ineligible voters has grown in some counties, and some counties have been less than cooperative in cleaning up voter rolls.

For example, on the issue of sending out cancellation notices to inactive voters, Paine said, “In some of the smaller counties where there wasn’t a lot of money in the budget, if they didn’t feel they had the money to send out the postcards, then [they felt] they could do something different or maybe just not get around to it.”

She blamed Padilla for failing to crack down on the counties.

“The secretary of state needs to oversee the counties and ensure they’re doing their jobs to have up-to-date and accurate lists,” she said. “He doesn’t make sure it’s enforced, and that’s the problem.”

Padilla didn’t reply to a request for comment as of press deadline.

EIPCa has especially urged Padilla to fix the statewide voter database system. “The system itself … makes it very difficult for the counties to do their jobs,” Paine said.

Swensen said that VoteCal, the official statewide database for federal elections, is flawed, and even though EIPCa has alerted the Secretary of State’s Office about glitches in the system that could affect the integrity of elections, the group’s complaints have fallen on deaf ears.

“We’ve been analyzing it for quite a while, since it was certified. There are lot of problems with it,” she said. “They don’t respond at all.”

When people move between counties, the VoteCal database is supposed to move their registration with them in the system. Yet in some cases, voters were registered in two or more counties, Swensen said.

EIPCa claims there are other irregularities with the database, such as people’s names cycling on and off the voter registry, which could affect whether or not they are allowed to vote.

“Those are the kinds of things that people are pointing out,” Swensen said. “It happened to me personally, and to our programmer.”

VoteCal has also failed to catch several inaccuracies in voter registrations originating from the California Department of Motor Vehicles (DMV), which has duplicated registrations and listed the wrong political party preference of thousands of voters, Swenson said.

Later that year, Shiomoto stepped down. The DMV then went through two acting directors, Bill Davidson and Kathleen Webb, before Steve Gordon took the helm in July 2019.

Swensen said: “The DMV is duplicating people’s registrations. It’s very clear that it’s happening—the same name, address, birth date, everything. VoteCal is supposed to find that and clean it up, so that person can’t vote twice or isn’t given two or more ballots. Well, it’s not doing that. The system is not catching it. It’s not working.”

“They are automatically registering anybody who has any transactions with the DMV,” Swensen said. “So, there’s a couple of dynamics going on here.”

Under the state’s controversial “Motor Voter” laws, the DMV allows all state residents, regardless of their immigration status, who qualify for a driver’s license to get one.

The Secretary of State’s website claims that although people can register to vote through the DMV, this doesn’t open the door to ineligible voters.

“If you indicate that you are eligible to vote, once you complete your DMV transaction online, by mail, or in person, your voter information is transmitted securely and electronically to the California Secretary of State. Once your eligibility to vote is determined, you will be registered to vote,” the website states.

But Paine remains concerned that Motor Voter laws could potentially open the door to increased voter fraud and non-citizens voting in elections.

“There are a lot of rumors or concerns, especially with the Motor Voter registration,” Paine said. “We are concerned about it. Even though we have a million non-eligible people, we don’t know how many of them are non-citizens, and we have no way of finding out.”

Problems at the Primaries

Widespread problems with a new voting system in LA County emerged during the March 3 California primary elections. Many voters stood in line for hours, while others simply gave up.

EIPCa warned that Padilla’s March 5 letter, which responds to the problems by directing Logan to mail a vote-by-mail ballot to every Los Angeles County registrant, will only make matters worse, further compromising the integrity of the Nov. 3, 2020 election.

Vote-by-mail ballots “will be mailed to potentially ineligible voters, which will open the door to unlawful voting. The risk is increased because California law allows anyone to gather and deliver these ballots to the officials,” EIPCa stated in a March 16 press release.

Padilla’s letter also directed Logan to address the following issues in “a timely and efficient manner” before the Nov. 3 general election:
• Some polling stations were understaffed and under-equipped;
• Response times to calls from vote centers were too long;
• Some vote center workers were insufficiently trained; and
• Many polls had voting machines that were not used.

EIPCa, is nonprofit that bills itself as non-partisan. The organization says it has recruited and trained more than 10,000 citizen volunteers to observe, document, and research California elections with the goal of “restoring integrity” to the system.