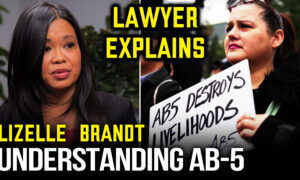 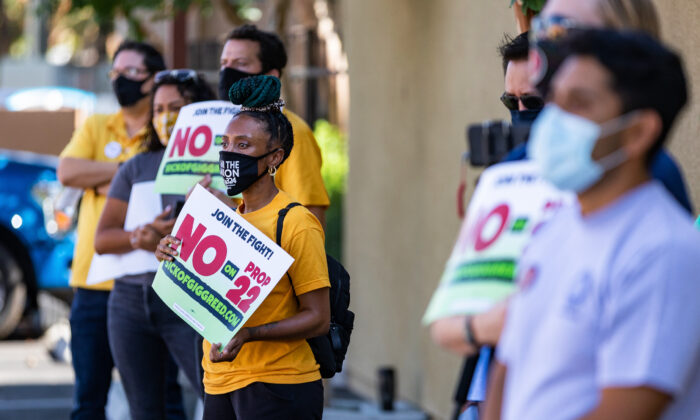 A traffic jam of opinions has accumulated after Californians voted to overturn in large part a controversial law that has forced gig economy companies to hire workers as employees instead of paying them as independent contractors.

Assembly Bill 5 (AB 5) went into effect in January, supported by labor groups and some state lawmakers with the intention of making companies such as Uber and Lyft give their workers all the benefits due to employees. Proposition 22, which passed with the support of almost 60 percent of voters on Nov. 3, allows these companies to instead continue treating their drivers as contractors.

The proposition was designed and promoted by Uber, Lyft, and DoorDash to exempt themselves from AB 5. Prop. 22 applies to all app-based drivers. It had more money behind it—over $220 million—than any other proposition in at least a decade, according to Ballotpedia.

AB 5 was created specifically with app-based drivers in mind, though it extended to practically all gig workers—freelance writers, musicians, wedding planners, sports coaches, and many more. State lawmakers have been busy since January writing in exemptions after backlash from these gig industries. With AB 5 overturned in regards to app-based drivers, other freelancers are hoping they can get back to their gig work soon, too.

‘Dismantling the Entire Law’ Could Be Easier Now

Karen Anderson, founder of the Facebook group Freelancers Against AB 5, told The Epoch Times that Prop. 22 was “a victory for our freelancer movement, because it will make repealing or dismantling the entire law that much easier.”

“Now that the main targets of AB 5 have received an exemption via the voters, the law is crippled,” Anderson said. “There are still hundreds of categories of professions adversely affected by AB 5.”

Wedding and event planner Michelle Garibay told The Epoch Times in January that work isn’t steady in her industry, so the flexibility of hiring contractors instead of employees is needed. Freelance also suits some people’s lifestyles. “They’re moms with kids,” Garibay said of some of her subcontractors. “They left full-time employment to be able to have the freedom to work as a contractor.”

Sylvia Amorino, founder of the nonprofit Solo Opera, told The Epoch Times in February that her organization was struggling, unable to hire freelance talent for her theatrical productions. While exemptions were later made for fine artists and musicians, other performance artists have not been exempted.

Anderson said, “It’s not a good look for community theaters to close permanently because of AB 5 when the entire ride-share and app-based delivery industry is now exempt.”

“They hired lawyers to write a misleading initiative and paid political operatives millions to collect the voter signatures they needed,” reads the “No on Prop 22” fact sheet on the CLF website. “Prop. 22 makes us all less safe by eliminating safety protections for riders and drivers and any liability these wealthy companies have to consumers.”

Uber and Lyft did not reply to The Epoch Times inquiries as of press deadline.

At an October rally in Orange, California, labor groups and app-based drivers spoke against Prop. 22. Gloria Alvarado, executive director of the Orange County Labor Federation, said: “If one of our brothers and sisters who is driving gets in an accident, they have no benefits if they are not working. They have no benefits of unemployment. … This is the harsh reality.”

Ride-share driver Marie Harrison said: “I now have 167,000 miles on my car, with not one penny reimbursement for maintenance, repairs, insurance, and registration.

Vivian Marlene Dunbar is one Lyft driver who doesn’t mind the passage of Prop. 22. The 72-year-old San Diegan relies on the service for most of her income.

“If it wasn’t for Lyft, I don’t know what I would do,” Dunbar told The Epoch Times, adding that she is too old for full-time work. “Working as a contractor provides me with a decent income, it’s fun to do, and it’s a wonderful company to work for. They keep emphasizing benefits—but you know, people who work at Burger King, McDonald’s, none of them get benefits either.”