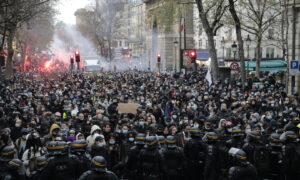 Californians protested against election fraud over the weekend.

In Sacramento, people protested for election integrity. Their gathering came the weekend before the electoral college votes. Their hopes were the same, that the government would hear them.

“We’re a little bit disconcerted about the way things are going right now. We’re hoping that somebody somewhere will be able to take this up and come out with a just conclusion, because we really believe that Trump did win by a landslide,” said Auburn resident Deborah Smith.