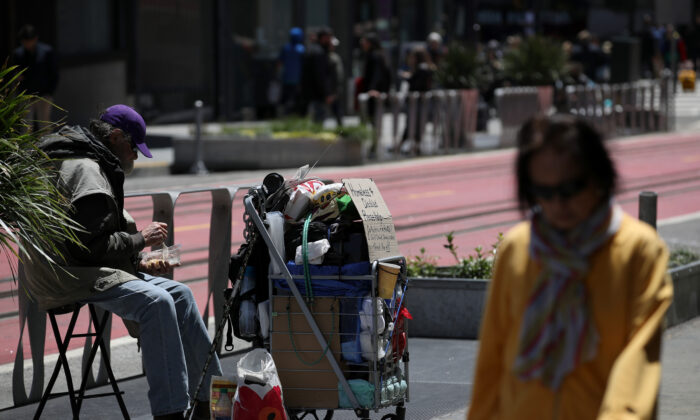 A pedestrian walks by a homeless man who is begging for money on May 17, 2019 in San Francisco, Calif. (Justin Sullivan/Getty Images)
Northern California

SAN FRANCISCO⁠—San Francisco has a problem with garbage, including human waste and needles on the street. Bridget Patten hopes to clear away 70 tons of it.

Patten was out and about in San Francisco one day when she realized how bad things had gotten in the city.

“It broke my heart,” she said.

“I stepped out of my car, I went to cross the street and I almost stepped on a heroin needle. It really opened my eyes to the epidemic, and the drug use, and the homelessness.

She isn’t the only one who feels San Francisco has gotten into a bad state.

“It’s becoming a health crisis,” said DeAnna Lorraine, a congressional candidate who has been active in clean-up initiatives. “I’ve talked to a lot of dog owners … who were walking their pets on the streets. And they said their dogs have accidentally stepped onto hypodermic needles or got infections from trash on the streets.”

Patten hopes to do what she can to clean things up. Her goal is to clear 70 tons of garbage from the streets in an effort she’s coordinating on Jan. 20, Martin Luther King Jr. Day.

Her family and friends are helping out, and her boyfriend is lending her dump trucks from his tree company. A local garbage hauling company will supply her with trucks, trailers, and a small work crew.

She hasn’t set up any fundraisers and will pay for the rest of the equipment and supplies out of pocket. She’s frustrated that she’s been unable to gain relief from the city for dumping costs.

At a rate almost $200 per ton at the local dump, the cleanup could cost some $14,000 in dumping fees. Patten wants a one-day permit for dumping.

“I have my own dump trucks, trucks with trailers, safe disposal boxes for needles, contractors’ bags, brooms, etc. All I am asking of the city is to pay for the dumping,” she said.

“I started my phone calls with Public Works,” she said. “I have been transferred to maybe about a dozen different voicemail boxes. Every time I call, I’m with one of four different receptionists, and each of them has a different idea of who I need to talk to.”

Patten also tried Recology, the company that operates the dump, but didn’t receive a reply.

A spokesperson for Recology told The Epoch Times via email, “All the Clean Team partners, including Recology, would welcome any size group whether 1 or 300 additional folks to join in one of our monthly Saturday Clean Team events. SF’s Clean Team events regularly turn out hundreds of volunteers on a Saturday morning to do cleaning, graffiti removal, and tree planting.”

According to San Francisco’s Budget and Legislative Analyst’s Office, the city spent about $35 million to clean the streets during the 2016–17 fiscal year. The median spending of 11 other major U.S. cities for cleaning is around $8 million.

Patten said she’s disappointed to see the streets still in a poor state.

“I don’t want to say that I’m doing this out of frustration or being angry, but I did get angry when I found out the taxes were raised in order to clean up the streets, and just how little has actually been done with the millions of dollars in funds that have been allocated to the city,” she said.

According to the San Francisco Public Works website, it has been meeting its target of responding to 95 percent of requests for street and sidewalk cleaning within 48 hours for the 2019–20 fiscal year.

In San Francisco, certain areas are taxed more to stay clean. These are called Community Benefit Districts (CBDs), which “strive to improve the overall quality of life in targeted commercial districts and mixed-use neighborhoods through a partnership between the City and local communities,” according to the city’s Office of Economic and Workforce Development website.

Noe Valley is the CBD that pays the least, with $270,000 in taxes submitted for cleanup in fiscal 2019–20. Union Square, a popular tourist destination, paid the most⁠—more than $6 million. The money is spent on cleaning and sidewalk maintenance, public safety, beautification, and more.

In May 2019, a group of neighbors in Dolores Heights proposed an extra tax on themselves and businesses in their neighborhood to keep their streets clean.

Former San Francisco mayoral candidate Richie Greenberg told The Epoch Times he thinks it’s a shame to do that, because it’s the city’s responsibility to clean the streets.

“All of the businesses in that district now have to pay extra taxes based on how big the square footage is of their buildings,” he said. “The money from that goes to pay to clean the streets and get rid of the graffiti and to throw all the trash out, and to come through and pressure spray the sidewalks. So they’re actually charging the businesses that are in that zone an additional tax, the tax assessment, for it to be clean.”

Other people have made attempts similar to Patten’s in the past. Lorraine, who is running for California’s 12th Congressional District against Rep. Nancy Pelosi, gathered supporters to clean the city as part of her awareness campaign in October 2019. She isn’t satisfied with how the city leaders are handling the problem.

“I actually think they neglect the trash,” she said. “They put their priorities in different places. And there’s so much homeless that even if they clean the trash during the day time, there’s so many homeless and drug addicts that hangout overnight that make messes throughout the night, that by the next morning comes, they’ve made a big mess again.”

Greenberg agreed that the homeless and drug addicts contribute the most to the mess on the streets.

Organized clean-up volunteers have to wear hazmat suits to keep themselves safe from the biohazardous waste, including needles.

“Cities like San Francisco have what seem to be an unlimited supply⁠—they’re giving out an unlimited supply of needles, where addicts can get as many as they want,” Greenberg said. “They go to a needle distribution place, they grab a bunch of needles, use it, and throw it right on the street. They’re not bringing it back to a recycling place.”

Greenberg also pointed out that defecation is also a big issue. There is even a San Francisco human waste map that shows all the feces sightings in the city.

“A lot of homeless and those who are addicted and are mentally ill, they’ll just pull down their pants and defecate right on the street, right on the sidewalk,” Greenberg said. “When people say that San Francisco, for example, has become like a Third World country, this is what they’re talking about. It’s like going to the most dirty, disorganized, lawless city in the world.”

Update, Jan. 23, 2020: Patten did not receive funding for dumping and is paying the $14,000 out of pocket. The city told her to leave the garbage bags next to garbage cans along the city street, take a picture of each one and submit it via an app on her phone to alert the city’s crew to collect it (and put it on her tab).

Aside from paying for the collection and dumping herself, she felt this posed other problems. “You will have a garbage bag tied off next to a garbage can, and a homeless person will come up and open it up and go through it and try to find anything that they can use,” she said.

She would have preferred the one-day dumping permit she had requested so she could ensure the garbage all got to the dump instead of potentially ending up back on the street.

Otherwise, the clean-up went as planned and was a success.