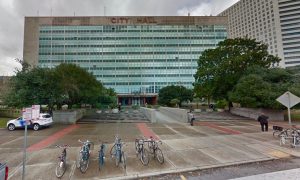 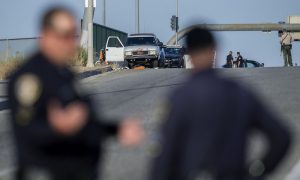 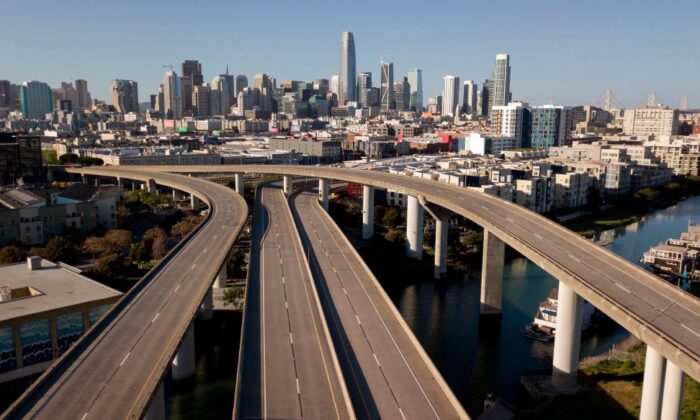 An interstate sits empty in San Francisco on April 1, 2020, during the COVID-19 crisis. (Josh Edelson/AFP via Getty Images)
Northern California

SANTA CLARA, Calif.—Now that car traffic in California has lightened as people shelter in place and work from home, some people are driving faster, causing an increase in the number of speeding tickets.

Many people aren’t working due to the shelter in place order, but California Highway Patrol (CHP) officers are still out there.

“We have not changed at all,” Dustin Kennerley, Public Information Officer (PIO) of CHP Hayward, told The Epoch Times. “The only thing that we’ve changed is we now wear personal protective equipment, so we’re wearing masks and gloves, and we’re just getting more conscious of the obvious health concerns that are going around.”

There are the same number of officers on the road, enforcing the laws the same way they normally do. They have been catching people driving way over the speed limit, some past 100 mph, they reported.

“At a time like this, where people’s lives are already kind of being put at risk, it’s just completely and totally senseless that somebody would need to drive that fast on a freeway [where] our infrastructure is not Autobahn,” John Fransen, PIO and CHP officer at the CHP Golden Gate Division in Vallejo, told The Epoch Times.

“Our freeways are not designed for 100 mph speeds, and a vast majority of vehicles are not engineered to sustain 100 mph impact, let alone a combined speed if a 100 mph vehicle goes head on with another oncoming vehicle,” said Fransen.

Fransen described how CHP officers know from experience the dangers of going too fast.

“We’ve had in the past vehicles flip over the center dividing section at over 100 mph and take out vehicles that are going in the opposite direction. We’ve had incidents where our officers have been killed because of people driving at egregious speeds at over 100 mph,” he said.

Ruben Jones, PIO of CHP Stockon, described how speeding violations also cause officers to put their lives on the line.

“I have to accelerate in excess of the posted speed limit, which theoretically puts me in danger, while I am attempting to overtake the person that I am trying to conduct an enforcement stop on,” Jones told The Epoch Times.

Speeding tickets in California range in price. There is a $35 base fine for driving 1 to 15 mph over the speed limit, but processing fees bring the fine to almost $300.

Fransen said CHP officers do not receive any revenue from the citations they issue. Their motivation comes from wanting to keep the public safe, they said.

“All it takes is something simple—a mechanical defect, a tire to blow out, something happens where your attention is diverted, somebody cuts you off, an animal runs out on the road—there’s all these different variables that can happen, that can cause catastrophic consequences,” said Fransen.

The officers hear many excuses, but none really make sense, and it’s not worth putting people’s lives on the line, they believe.

“If it’s an emergency situation, they need to contact an ambulance. If they’re late for work, they should have left their house earlier,” Fransen said. “There’s never a good reason to go 100 mph and put so many people’s lives at risk.”