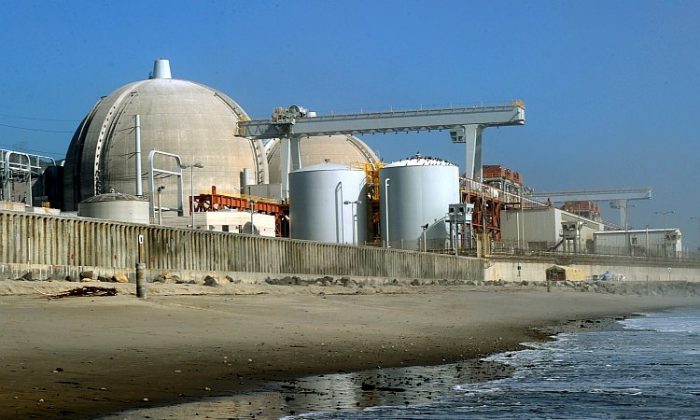 The San Onofre Nuclear Power Plant sits at the edge of the Pacific Ocean and provides much of Southern California’s power. The plant was shut down after a leak was detected earlier this year, and federal regulators still don’t know when it will be running again. (Mark Ralson/AFP/Getty Images)
US

A radiation leak prompted a shutdown at a California nuclear plant early this year, and federal regulators still can’t say when the plant will be running again.

In January 2012, operators at the San Onofre Nuclear Generating Station (SONGS) detected a leak and found severely damaged equipment in the plant’s newly built steam generators. SONGS has since been closed, undergone extensive testing, and visited by a team from the Nuclear Regulatory Commission (NRC), but so far experts say they don’t have a permanent fix.

Critics have accused Southern California Edison of withholding important details about the facility, and for being too eager to restart SONGS amid lingering technical problems. In a press conference, Chairman Jaczko addressed transparency and safety concerns, and stressed that he took the steam generator issue “very seriously.”

“And after some frank discussions with California Edison today, I can say that they take it very seriously too,” he said. “They are working in a productive and conservative way.”

Jaczko added that he had set very “firm conditions” on how the plant could restart, but couldn’t indicate how long a fix might take.

“I don’t want to speculate on a timeline at this point,” the chairman told reporters.

While officials have repeatedly stated that safety is the project’s top priority, critics contend that too much attention has been paid to bringing back profits. The shutdown has cost the power company dearly—as much as $1 million a day, according to one expert.

The biggest issue, however, is the steam generators. The SONGS original generators operated safely for over a quarter century, but the 2010 replacements haven’t fared so well. In less than 2 years, tubes in all of the facility’s new steam generators have shown significant deterioration, which experts say could lead to a catastrophic release of radioactivity in the event of rupture.

The NRC says that other plants have had problems with similar tubes, but only SONGS has seen a shutdown. The vulnerability appears to be in San Onofre’s unique design.

A report from Southern California Edison shows that the energy company purchased identical replacement reactors, but the equipment found at the plant tells a different story. Two of the reactors SONGS had installed were heavily modified, and according to a recent evaluation from Fairewinds Associates, the untested materials and techniques used in the elaborate redesign are to blame for the rapid degradation of tubes.

Although Southern California Edison has warned that residents could see rolling blackouts if San Onofre isn’t up and running soon, many in the surrounding community are more concerned that the job is done right.

Fearing the worst, organizers have drawn ominous parallels to the recent disaster in Fukushima, and have been pushing the NRC to keep SONGS shut down until the root of the problem can be clearly determined—and permanently fixed. Jaczko indicated he heard the message loud and clear.

“The bottom line is, we have to have assurances of safety before we can allow the plant to restart,” the NRC Chairman told reporters. “We will take the steps that are necessary to ensure public safety. That means that they have to demonstrate to us that they understand the causes, and that ultimately they have a plan to address whatever the causes are.”