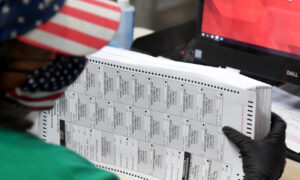 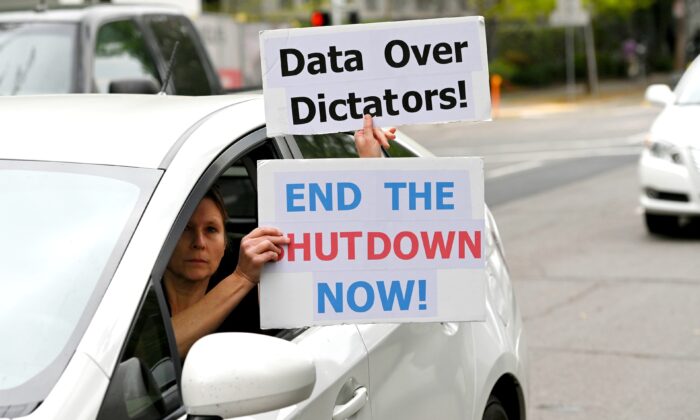 Doctors in California who say science related to COVID-19 has been “weaponized” and decision-making has been “fear-fueled,” business owners who spoke of great losses, and elected officials who say Gov. Gavin Newsom has taken precautions too far all have called for reopening the state at a conference in Sacramento from Jan. 8 to 10.

“When the governor says he is listening to science, what he means is that he is listening to a particular group of scientists whom he happens to have some shared opinion,” said Dr. Joseph Ladapo, a University of California–L.A. Medical Center physician and policy researcher, during the live-streamed conference.

“Everyone has felt the harms of these lockdowns—the psychological impact,” Dr. Jay Bhattacharya, professor of medicine at Stanford University, said.

Dezy—an Iranian-American veteran who owned Dezy Market in Orangevale, Sacramento County, before going bankrupt amid the pandemic—said: “I was forced to close my business, and I didn’t know what to do. But the good thing about me is the United States Army taught us very well not to quit. … So I’m opening another business.”

During a panel discussion among doctors on the second day of the conference, Ladapo answered the question, “If you had a magic wand, what would you change in the current COVID-19 pandemic situation?”

“The fear-fueled decision-making,” he said. “Something that hasn’t been fun to watch is the weaponization of science throughout this pandemic, and it stretches across many controversial areas—from the effect of the lockdown, the role children play in transmission of COVID-19, debate of the effectiveness of the mask, the role of outpatient therapy.”

He said the medical community has become overcautious, preventing the use of potentially life-saving drugs that have shown beneficial results in randomized clinical trials. Doctors and researchers who speak to those benefits have been silenced or marginalized, he added.

Fareed agreed, saying, “By far, for me, the worst thing has been the suppression of early treatment and the consideration of a number of [medicines] that can suppress the early viral replication and allow the individuals not to progress to be hospitalized and die.”

He said medications such as hydroxychloroquine, fluvoxamine, bromhexine, and ivermectin “should be offered from the get-go and not be stigmatized” as testing them continues.

While people die from the CCP virus, doctors withhold promising treatments, Fareed said, and take the approach of “it’s better safe than sorry.”

Both Fareed and Ladapo support vaccination against the CCP virus; they say the most vulnerable, such as the elderly and front-line medical workers, should receive vaccines first.

Financial distress and isolation are causing serious mental health problems as a result of lockdowns, experts and business owners said at another panel discussion on Jan. 9.

Christine Dariotis and her family run the Old Spaghetti Factory in Sacramento. Her 70-year-old husband grew up in the restaurant business, she said. He’s been battling stage 4 cancer and is currently being treated at a hospital in Texas. She has watched him deteriorate because of stress related to their business.

She said people need to talk more about the emotional toll of the lockdowns.

“We were in Houston in February of 2020. My husband had full-body scans and a doctor visit then and … the cancer was at bay, everything was status quo. And then when COVID hit and the shutdowns [happened]. To just see what it has done to him, the stress that he’s been under, I’ve never seen anything like it,” Dariotis said.

“Unfortunately, we found out he had a tumor by May, and he’s undergoing chemo now.”

Matthew Oliver is the owner of House of Oliver in Roseville, California, just north of Sacramento. He told the story of a mother who came to his restaurant with her 14-year-old daughter, who was recently released from hospital after attempting suicide.

“The daughter said, ‘I just want to go somewhere where I can feel normal,’” Oliver recalled. “Right now, we have an opportunity to be that resource, to be that hope for our community. That’s why it’s so vital that we stay open,”

Republican elected officials spoke against the Democratic governor’s response to the CCP virus.

“Your life’s work—the ability to put food on your family’s table, keep a roof over your family’s head—[is being] … brutally eradicated,” McClintock said on the first day of the conference.

He said people are being prevented from “using your own best judgment.”

The virus should not be taken lightly, he said, although “the problem is that we have fixated on one danger to the exclusion of all else.” While he said he’s worried about his 90-year-old mother catching the virus, she might have a stroke, get the flu, or experience negative effects from social isolation.

“It’s not consistent with democracy or representative government,” he said.

Assemblyman Kevin Kiley (R-Rocklin) said: “We use the analogy of a dictatorship in ancient Rome, which is exactly the way it works.

“When there’s a state of emergency, you just literally forfeit all power and put it in the hands of one person. We think that’s ultimately what’s at stake in this case.”

Sutter County Superior Court Judge Sarah Heckman sided with Republican lawmakers in November who challenged Newsom’s use of emergency powers to change voting laws by sending mail-in ballots to all registered voters. Though the legislature later passed a similar law, meaning the act of sending the ballots remains legal, Heckman’s ruling stated that it was beyond the power of the governor to make such a change unilaterally.

Brad Dacus, president of Pacific Justice Institute, said at the conference, that a state of emergency isn’t a reason to neglect the Constitution.

“The Constitution is never on the shelf,” he said.