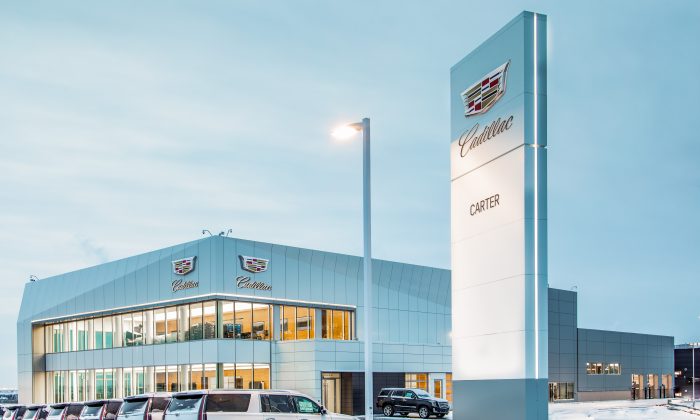 The first dealership in North America devoted exclusively to the Cadillac brand and using its new brand architecture is now open in Calgary, Alberta.

The new building, which is now the first Cadillac-exclusive dealership in Western Canada, features three storeys and 50,000 square feet of developed space, including an upper showroom dedicated to the V-Series high-performance brand. Vintage Cadillac cars will also be displayed on a rotation to allow enthusiasts to compare the brand’s past with its latest designs.

McKeen says that the dealership has several distinct features to help convey the premium experience that the Cadillac brand is seeking to offer its customers.

“A unique feature that we’ve integrated into the dealership is a virtual reality room,” he said. “This is critically important for Cadillac’s strategy because with all of the new model releases coming up, they want to be able to showcase that product to clients long before they physically arrive in the city of Calgary. XT6 is a new SUV that Cadillac has announced. It’s due out later this year, and we’re going to be able to have our clients come in and experience it through VR.”

The dealership will also feature a solar-powered fast-charging station for electric vehicles, which will be fully functional in the spring of this year.

“We’ve built this to take advantage of what we see as a growing market,” McKeen says. “That takes zero emissions to another level because we’re literally charging those electric vehicles with the power of the sun.”

An improvement that McKeen says the new location will be able to provide over the previous multi-brand General Motors dealership is picking up customer vehicles at their homes and workplaces to bring them in for service.

“One of the things that we realized, especially with people that tend to purchase luxury vehicles, is they’re darned busy,” he says. “They’re not going to have a lot of time in their day to take that inconvenience of traveling down to the dealership to have the work done. If we can take that out of their schedule, that probably frees up an hour, which for that type of individual is hugely important.”

McKeen also says that conversations with customers buying premium products have shown that people prefer to deal with one person in the purchase process from start to finish, which has led to a change in staffing structure in the new location.

“We’ve hired a new team of salespeople we call brand ambassadors,” he explains. “They are trained from start to finish to be able to assist the customer. So, there’s no more of this making an offer and a salesperson runs off to an unseen manager in another room. They’re able to deal directly with the customer when it comes to that.

“And on arranging the financing, an interesting statistic that we came across is that 95 percent of Cadillac applicants for financing are auto-approved. What that means is a human at the bank never even looks at it. Their credit is such that a computer is able to just approve it. Knowing that allows us to have our salespeople equipped to go through that part of the process, too. It saves time in the dealership, and it’s also a smoother process for our clients.”

This new location, which took approximately two years to bring to fruition, is a natural fit for the Calgary market, McKeen says.

“Most people don’t realize this, but Calgary has a very strong and vibrant luxury vehicle market,” he says. “We certainly have had some economic headwinds in the city of Calgary from 2015 right up until today, (but) that luxury market has stayed very robust in the city of Calgary, and Cadillac is no exception to that rule.

“Our dealership is the second-largest retailer of Cadillacs in the entire country. Calgary is not quite as big as Vancouver or Montreal, but what we are seeing is even with the economic challenges that Calgary has had, there is a strong core of luxury brand activities taking place.”

The Cadillac brand posted its best sales year in its 116-year history in 2018, a record that McKeen says gives him confidence.

“We’ve had such great success with the brand,” he said. “It’s probably been about four years now since there seems to have been a real shift in leadership strategies at Cadillac. They came to realize that the best way to give the dealers confidence was to make sure that we knew what direction they were going and allow us to comment on it and have input into it.

“Anytime that you can be part of the process, it just increases your confidence level as to the end result and main strategy.”

Stephanie Wallcraft is a professional automotive journalist based in Toronto, Ontario.