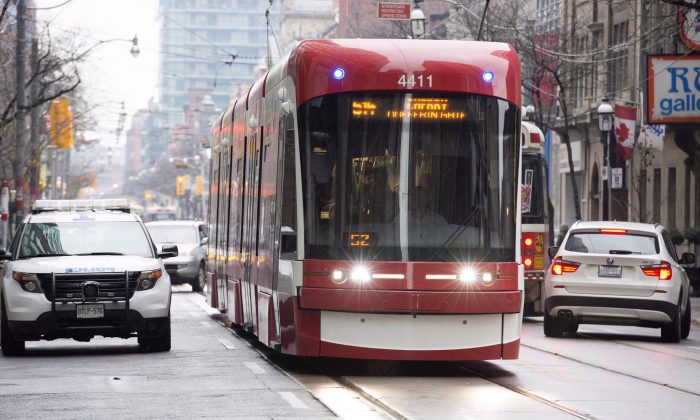 A Toronto Transit Commission streetcar produced by Bombardier in a file photo. Bombardier is laying off 550 employees from its Thunder Bay operation as rail contracts come to an end. The company is also blaming U.S. Buy America provisions for the need to relocate operations south of the border. (The Canadian Press//Doug Ives)
Companies

Canadian protectionism is to blame for the United States ramping up Buy America, and the federal government missed its chance to head it off by adopting the wrong NAFTA renegotiation strategy, says Carleton University business professor Ian Lee.

Buy America—and Buy American—are not new. The two different legislations—Buy America(n)—have been around for decades. The former, a provision of a 1982 act, focuses on U.S. federal transportation infrastructure procurement, while the latter, enacted in 1933, applies to all U.S. federal government agency purchases of goods.

Buy America(n) protects U.S. interests even in the presence of free trade. The reality is that trade may not be free for every sector in an economy. Some Canadian companies like Bombardier are being forced to do assembly in the United States, thus creating jobs there instead of in Canada.

“We made a huge strategic mistake when we started negotiating with the Americans,” Lee said in an interview. “We should have said everything’s on the table explicitly—to target Buy America, Buy American.”

Lee says countering Buy America(n) will be more difficult now that the Canada-United States-Mexico-Agreement (CUSMA) has already been negotiated, but a possible solution may be a new separate bilateral agreement focusing on protected sectors and subsidies—if the political will exists.

The Buy America threat hit the front pages when Bombardier announced on July 10 that it would be laying off 550 employees in Thunder Bay effective Nov. 4 as rail transportation contracts come to an end. While provincial and federal governments play the blame game, the crux of the issue is not Buy America exclusively as much as it is Bombardier itself and the federal grants and loans it receives, but also a poor competitive environment for business in Canada.

Primarily looking out for U.S. interests but effectively turning up the heat on Canada, U.S. President Donald Trump signed an executive order on July 15 to raise Buy American percentages. “My administration shall enforce the Buy American Act to the greatest extent permitted by law,” according to the executive order.

Canadian parties are calling for the federal government to play tit-for-tat or ask for an exemption.

Dennis Darby, president and CEO of Canadian Manufacturers & Exporters (CME), called on the federal government to make “reciprocity in government procurement a fundamental principle of our trade practices.” In a press release, he stated that 86 percent of manufactured goods that Canada exports to the United States are components to be assembled as part of a supply chain.

“If we cannot achieve that equal access, or secure Canadian exemptions more generally, then Canada should match protectionist measures in kind to keep Canadian businesses in Canada,” said CME in an email.

The provinces’ premiers are also putting pressure on the federal government to take stronger action against Buy America(n). Saskatchewan premier Scott Moe said Canada should be excluded from them.

Thunder Bay mayor Bill Mauro told BNN Bloomberg that “we’re looking for a level playing field” and that the Canadian content policy needs to remain a part of the government’s procurement process. VIA Rail recently doled out a $1 billion contract to Germany’s Siemens AG—it did not have a Canadian content requirement.

Lee says that if Canada wants to get rid of or water down Buy America(n), it has to be prepared to give something in return.

“We’re going to have to … open up some of those protected industries,” he said.

As sectors affected by Buy America(n) seek answers, Canada’s shortcomings are under the microscope.

Canada is choosing to support certain industries. With protections for dairy and poultry a thorn in the side of Americans, Canadian manufacturing is bearing the brunt of U.S. retaliation via Buy America(n).

“We’re no longer competitive in manufacturing,” Lee said. He predicts Canada will no longer be manufacturing autos in 10 to 15 years due to lower productivity of workers who get higher wages and benefits than their U.S. counterparts.

Buy America(n) also reminds of the ongoing competitiveness challenges Canada faces in retaining businesses. What Bombardier shows is that governments have not been rewarded for subsidizing specific businesses—trying to pick winners—and instead should focus on improving competitiveness in a broad sense through indirect means like lowering taxes and funding training programs, says Lee.

Bombardier has its share of idiosyncratic problems. It has a poor track record for producing defect-free goods in a timely manner and has become a poster child for ill-fated taxpayer support.

The company had already announced the opening of a rail car assembly site in Pittsburg, California, on June 14 to comply with Buy America rules.

“The new site further strengthens its U.S. presence and commitment to the U.S. market, and will help Bombardier continue to meet Buy America requirements,” the company said in a press release.

Government subsidies to specific companies come with a plethora of problems. It isn’t fair to other companies not getting subsidized, and it could result in a backlash from trading partners that might subsidize their companies, impose heavy tariffs, or block a foreign-subsidized company from their markets altogether.

Another lesson for many local economies in Canada is the need to diversify. For Thunder Bay, losing its largest private sector employer further reinforces this objective. Bombardier’s business is cyclical, and Mauro recognizes that knowledge-based jobs can be more recession-proof—and Buy America(n)-proof.