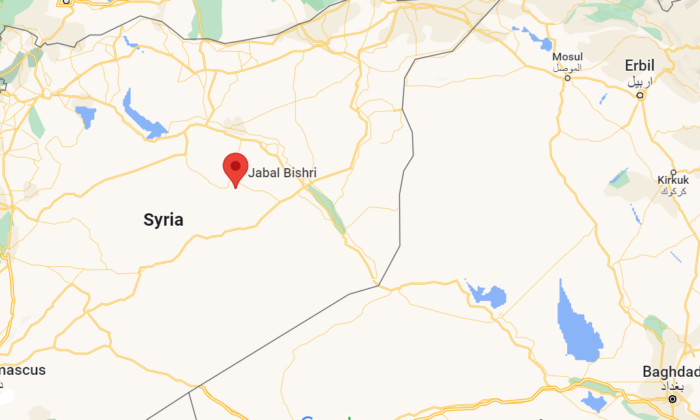 A map shows the location of the Jabal al-Bishri region of the Raqqa Province, Syria, on June 20, 2022. (Google Maps)
Middle East

DAMASCUS—Eleven government soldiers and two civilians were killed in an attack on a bus in northern Syria on Monday, the defence ministry said, and the ISIS terrorist group later claimed responsibiliy for the action.

A defence ministry statement said that 11 soldiers and two civilians were killed in what it called a terrorist attack on a civilian bus. Three soldiers were wounded, it said.

ISIS claimed responsibility for the attack on one of its channel on the Telegram messaging app.

The Syrian Observatory for Human Rights said the ambush had been carried out by ISIS sleeper cells that launch hit-and-run attacks in the country’s desert areas.

Syria’s 11-year-old conflict has carved the country into various zones of control, with government troops and allied fighters controlling the most territory.

A patch of northwestern territory is held by Turkish-backed rebels and more hardline groups while Kurdish-led forces with U.S. backing hold the northeast.

One of the deadliest bus ambushes was in December 2020, when 28 people were killed in an attack on a main highway in Syria’s eastern Deir al-Zor province.

In January this year, a prison housing ISIS suspects witnessed a break-out attempt after inmates took over the facility. Their attempts were thwarted by the Kurdish-led Syrian Democratic Forces (SDF), aided by U.S. troops.

Last week, the U.S.-led coalition battling ISIS in Syria said it had detained a senior leader of the group during an early-morning operation.

By Kinda Makieh and Omar Fahmy