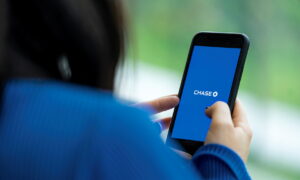 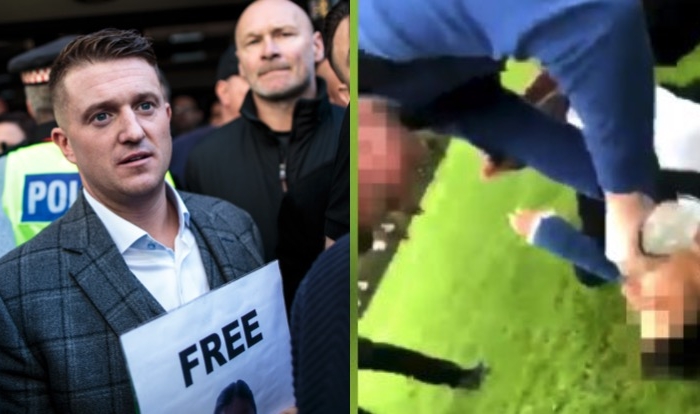 L—English Defence League Activist Tommy Robinson, whose real name Stephen Yaxley-Lennon, greets supporters after his court case on was adjourned on Sept. 27, 2018 in London, England. R—A schoolboy at a South Yorkshire school is captured on video bullying another pupil, pouring water in his mouth as he pins him down. (Jack Taylor/Getty Images; Screengrab/Twitter)
UK

LONDON—A schoolboy allegedly responsible for an attack on a young Syrian refugee has said he fears for his life after being targeted with violent threats.

The teenager, whose name cannot be revealed for legal reasons, said he and his family have gone into hiding after a video of the incident went viral and sparked outrage.

English Defence League founder and right-wing activist Tommy Robinson interviewed the 16-year-old boy, who said I am “scared for my life, scared for my family’s life.”

“My address got put out and there were people turning up at my house in cars, all this type of stuff,” he said, before adding “We went into hiding because we’ve had all these threats, rape threats, death threats.”

Robinson, in a separate video reported on by The Metro, said the aggressor, who was charged with assault after the attack on the Syrian refugee later identified as Jamal, is “living in complete fear and the whole country has turned on him.”

The outspoken critic of Islam also claimed that at the school where the attack occurred there had been previous incidences of groups of “Muslim gangs beating up lots of young English kids.”

The undated video shows the 16-year-old boy head-butt a much smaller 15-year-old whose arm is in plaster, identifying him as Jamal, as a group of school children walk across a field. After knocking him to the ground, the larger boy pours water over his mouth as he talks about “drowning” him—what many furious social media users have described as “waterboarding.”

The same Twitter account also posted a video showing a girl wearing a bright pink hijab, identified as “Jamal’s younger sister,” being shoved from behind, then chased and brought down to the ground.

“She has endured as much as Jamal,” the poster wrote, “and has been self-harming culminating in an attempt at suicide.”

The individual said that the school had been ignoring a pattern of abusive behavior “and only now acted due to public pressure.”

This is jamals younger sister, she is Lao being bullied as can be seen from this video, she has endured as much as Jamal and has been self harming culminating in an attempt at suicide, the school has has been over looking this and now only acted due to public pressure. pic.twitter.com/fGktHqT4hk

The video showing the attack on Jamal was shared widely after being posted by one Twitter account, Blue Days Dark Night, where it picked up nearly 7 million views in less than a day.

“The thugs already broke his arm and now mockingly waterboard him when they get a chance. Name and shame these thugs, school and police have done little to help,” wrote the Twitter user.

But when locals did precisely that, not only naming the bully, but also posting his social media information, address, and telephone number, the original poster called for them to back off.

“Please please please, do not share or tweet any addresses of anyone connected with this, wrote Blue Days. “The bully is also a child, the authorities are now involved, we need to work toward highlighting such issues so they never arise, without becoming a form of bullies ourselves.”

The Facebook page identified by locals as belonging to the bully—which appears to match the face in the video—is now plastered with angry comments.

Robinson strongly rejects the “far-right” and racist labels he is often given in the media and by critics.

The alleged perpetrator previously gave The Sun Online a handwritten statement in which he accepted responsibility for his actions but denied any previous pattern of bullying.

‘The incident was isolated and came about from an altercation between us earlier that day,” he wrote. “The incident was not racial as up to that time we had been on good terms.”

After the attack, Jamal told ITV News, “When I saw everyone looking at this video I felt ashamed of myself and why it happened. I was really upset about that.”

“I was feeling like I couldn’t study or do my homework. I woke up at night and just started crying because of this problem,” he said.

The Metro reported that Jamal said he had been tormented by bullies for the past two years.

According to the founder of a crowdfunding campaign set up to help the victim, Jamal had been subjected to protracted bullying at his school in Huddersfield, West Yorkshire, in the north of England.

The founder of the funding page, Mohammed Tahir, said that Jamal’s family struggles to meet the basic necessities of life. “We want to raise money for the family to ease their situation and hopefully they can use the funds to help improve their quality of life and to put a smile on their faces.”

“Having left a war torn country, the least they deserve is to live in peace without being harassed. Please donate generously and let’s change this horrible situation into a blessing in disguise for them,” Tahir continued.

Thousands of well-wishers donated over £50,000 in just 14 hours on the donation platform, even drawing praise from Britain’s Prime Minister Theresa May, who said the generous public response showed the “true spirit of Britain.”

According to The Metro, Jamal’s family fled the Syrian city of Homs, which was under siege from May 2011 to 2014, after protests erupted against the rule of Bashar al-Assad.

The Syrian Observatory for Human Rights, a UK-based information office whose stated aim is to document human rights abuses in Syria, says on its website that as a result of the Syrian civil war, between 364,792–522,000 people have been killed.

The Office of the United Nations High Commissioner for Refugees (UNHCR) said that the conflict has resulted in the internal displacement of over 7 million people, and has given rise to over 5 million refugees.