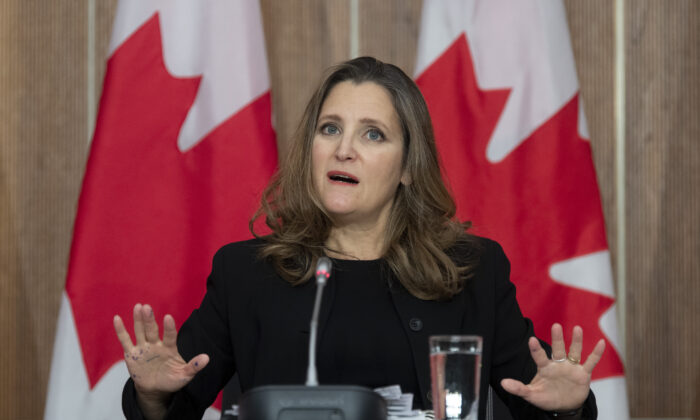 Deputy Prime Minister and Minister of Finance Chrystia Freeland responds to a question during a news conference in Ottawa, on Nov. 30, 2020. (The Canadian Press/Adrian Wyld)
Canada

A key dynamic for the April 19 federal budget—the first in over two years—will be how the government expects to balance economic support, as the pandemic’s third wave intensifies, with the $70 billion to $100 billion it earmarked in stimulus spending last fall.

In response to COVID-19, the feds launched a number of programs to support businesses and Canadians that were meant to be temporary. Unwinding them could prove unpopular, and at stake is how much of those programs become permanent, said Macdonald-Laurier Institute senior fellow Philip Cross, a former chief economic analyst at Statistics Canada.

“What I’ll be looking for in this budget is how much of this temporary spending increase due to the pandemic is used as leverage, as an excuse to increase spending permanently,” Cross told The Epoch Times. He says there is a risk of that happening with some of the temporary measures in addition to those that will be part of the three-year stimulus program.

“I would think, frankly, that some of the expansion of the coverage of employment insurance is going to be permanent,” Cross said.

No details were provided in the economic statement last fall on how the up-to-$100 billion would be spent, and as such it was not factored into any projections for deficits and the debt.

The feds are expected to spend it on child care, universal pharmacare, and the green economy.

Canada’s fiscal watchdog, the Parliamentary Budget Officer (PBO), is projecting a 2020–21 deficit of $363.4 billion, or 16.5 percent of gross domestic product (GDP)—already the highest since tracking of this metric began in 1966–67. That estimate, released March 31, only accounts for the measures announced in the economic statement last fall and doesn’t factor in the three-year stimulus spending.

The PBO warns that there is a risk the country’s debt would no longer be sustainable if new programs introduced in the budget require more borrowing and become permanent.

Where the country’s finances and economy go hinges on progress combatting the pandemic. The signs looked good in late March, given the amount of money Canada and the United States have spent to dig out of the crater.

In its fall fiscal update, the feds introduced the notion of “fiscal guardrails,” linked to improvements in the labour market, to guide when it would begin unwinding pandemic response programs.

The PBO said it projects “almost all of the ground lost in the labour market due to the pandemic will be made up by the end of 2021–22, the first year in which the earmarked stimulus would be implemented.

“This would again suggest that the size and timing of the $70-to-$100 billion for stimulus may be mis-calibrated.”

But Cross says that as the COVID-19 pandemic intensifies across Canada, progress in the labour market could be temporary.

“As long as the pandemic is here, that has to be priority one, two, and three, and all these other things are just going to have to wait,” Cross said.

The Conference Board of Canada had some promising projections for the Canadian economy in its two-year economic outlook released March 30—without factoring in any additional federal stimulus.

It said the economy has already recovered close to 80 percent of the jobs lost due to the pandemic-induced recession in 2020.

Canadians also increased their savings by $5,100 on average last year, according to the Conference Board, and some of those savings will be spent this year and next.

“A full recovery to pre-pandemic levels of spending is expected to be reached by early 2022,” stated the Conference Board.

And given the massive U.S. government spending, the Conference Board expects a sharp rebound in that economy, which will boost exports in Canada.

When it comes to building long-term prosperity, a key component is capital spending, which boosts the country’s productivity.

Canada’s economic output is about $66 billion short of where it was pre-pandemic, said Trevin Stratton, the Canadian Chamber of Commerce’s chief economist, in a March 24 statement.

In a financial post oped, Jack Mintz, President’s Fellow at the University of Calgary’s School of Public Policy, said federal and provincial governments have undermined growth with excessive regulation and costs to business, along with heavy taxation of entrepreneurs and skilled labour.

“Canada is not very appealing to investors these days,” Mintz said. “The real challenge facing Canada is to address our woefully inadequate investment performance. Nothing else is as important to our long-run prosperity.”