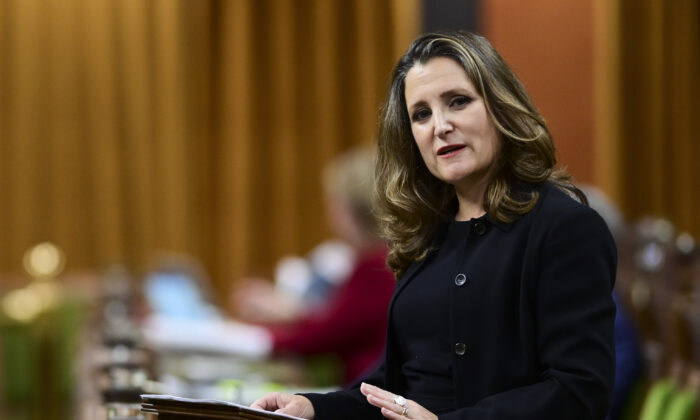 Minister of Finance Chrystia Freeland delivers the 2020 fiscal update in the House of Commons on Parliament Hill in Ottawa on Nov. 30, 2020. (The Canadian Press/Sean Kilpatrick)
Canada

The Liberal government’s fall economic statement released Nov. 30 confirmed another sizable increase in the deficit, though without including a significant spending program to grow the economy once the pandemic is under control.

The statement itself does not represent the “reset” mentioned by Prime Minister Justin Trudeau at the United Nations or the “great reset” discussed at the World Economic Forum, according to a business professor.

“I think that the government heard some footsteps and they were terrified,” Carleton University’s Ian Lee told The Epoch Times.

“It’s not the grand reset. It’s a little mini reset,” he added.

Lee said he thought the Liberals would pay a hefty political price if the deficit skyrocketed into the $400 billion to $500 billion range. Instead, the government projects a record deficit of $381.6 billion in 2020–21, which is still significantly 11 percent more than July’s $343.2 billion.

Left out of the statement was any reference to a guaranteed annual income program, which would be very expensive and was thought to be part of a larger reset of social programs.

However, universal pharmacare is in the works, as is a national child-care program, in what Finance Minister Chrystia Freeland called a “feminist agenda.”

She told reporters prior to the release of the statement that the feds have a plan to get through the winter, provide vaccines for Canadians, and build the economy back.

Freeland couched the statement as a downpayment on a larger strategy, which would be expected in Budget 2021. The feds introduces the notion of a three-year stimulus package of up to $100 billion—3 percent to 4 percent of gross domestic product (GDP)—to jump-start the economy.

“Our government will make carefully judged, targeted, and meaningful investments to create jobs and boost growth,” she said in her speech to the House of Commons. Spurring the green economy is expected to be one of the top priorities for this round of growth spending.

The Business Council of Canada took issue with the lack of a plan for the upcoming massive spending, as the statement does not say how that stimulus would spur private sector investment and the economic recovery.

“Business, not government, is the primary engine of job creation and sustainable economic growth,” said Goldy Hyder, the council’s president and CEO, in a statement.

As expected, a major portion of the deficit is due to the COVID-19 response—$275.2 billion, or over 70 percent.

The government projects the deficit to drop dramatically over the following two fiscal years, to $121.2 billion in 2021–22 and to $50.7 billion in 2022–23, as the economy rebounds and the need for temporary measures fades.

But Lee says this is double-talk since it doesn’t factor in the planned growth spending over three years.

The feds provided four scenarios for what the deficit might look like given various ways in which the 3 percent to 4 percent of GDP is spent. At the end of the five-year projection horizon, the deficit would be $33.4 billion compared to $24.9 billion without the growth spending.

Lee says it’s deceptive how the government is characterizing the deficit, since it is essentially splitting it off and planning more spending on top of what is already nearly a $400 billion deficit.

This three-year growth spending has not been included in the government’s deficit projections since how much is spent and when is yet unknown. More clarity is to come as vaccine rollouts begin and as the feds get closer to Budget 2021 early next year.

Freeland told reporters that the amount of the spending on growth programs should be higher than the 2.5 percent of GDP spent by the feds on the recovery after the 2008 financial crisis since the pandemic crisis is worse.

The Liberals are not yet providing a pathway to getting the budget deficit under control, but are looking for economic indicators like hours worked and the unemployment rate to indicate when it would be appropriate to rein in the support programs.

“The measure we’re going to be looking at to see if we’ve got the job done, is really around jobs,” Freeland said.

She added that the specifics of these “fiscal guardrails” will be rolled out with further details on the growth plan, and will also guide the government on outlining a “long-term fiscal anchor” to rein in the finances.

Freeland also pointed to Canada having the lowest interest rate costs in 100 years and being in the strongest fiscal position of any G7 nation prior to the pandemic as the circumstances that allowed the massive spending, which has exceeded that of all of its peers.

However, Lee warns that interest rates won’t stay near historic lows for ever and that the debt will need to be refinanced.

Official Opposition and Conservative Leader Erin O’Toole’s main point of contention with the Liberals is the lack of a plan for vaccines, which is needed in getting the economy to some semblance of normalcy and seeing that reflected in the labour market.

“While Americans are talking about mass vaccination throughout January, our government is talking about getting Canadians vaccinated for September. The Minister of Health talks a great deal about caring for Canadians, but there is only one way to describe how we got in this situation: incompetence,” he said in a statement.

The feds are still working on assistance for the airlines and ensuring that Canadians are refunded for cancelled flights. The government is also exploring ways to ensure its program for helping large businesses—the large employer emergency funding facility (LEEFF)—is more useful. The program has been criticized for the high interest rates on its loans and has thus reportedly seen low take-up.

The feds also set up a program to provide government-backed loans to the hard-hit sectors of tourism, hospitality, and arts and culture.

The government increased the maximum rate of the Canada Emergency Wage Subsidy to 75 percent from Dec. 20 to March 13, 2021. It will also provide families with young children temporary support of $1,200 in 2021, according to Canada Child Benefit criteria.

The feds expect the comprehensive social safety net to be in place until the summer of 2021.

The lack of a plan at this stage to deal with widening deficits is of grave concern to Aaron Wudrick, federal director of the Canadian Taxpayers Federation.

“Freeland needs to produce a full budget in early 2021 that contains real fiscal targets and a plan to get the deficit under control. If she does not and the current debt trajectory continues, our country will eventually face a fiscal reckoning that will make the painful cuts of the 1990s look like a walk in the park by comparison,” he wrote in an op-ed.