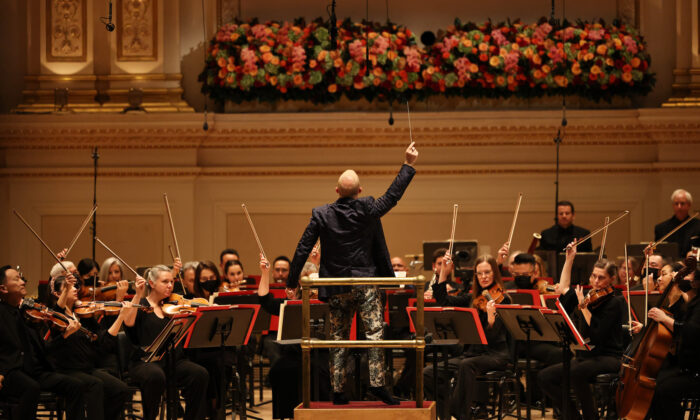 A performance of “Ode to Joy” has been canceled after a Scottish choir refused an American orchestra’s demand to wear masks while singing.

The 130-person Edinburgh Festival Chorus was due to perform Beethoven’s “Ninth Symphony” alongside the Philadelphia Orchestra at the Edinburgh International Festival on Aug 25.

But the choir rejected the U.S. orchestra’s calls to wear masks while singing, canceling the event. Beethoven’s “Fifth Symphony” will now be performed as it does not require a choir. Since April, people in Scotland are no longer legally required to wear face coverings.

The Festival described the Philadelphia Orchestra, which has a residency this year, as one of “America’s most accomplished,” and had anticipated the “Ode to Joy” performance as one of its top events at The Usher Hall.

“Joined by a quartet of exceptional international vocal soloists and the full might of the Edinburgh Festival Chorus, the Philadelphia Orchestra and Nézet-Séguin launch their residency with the symphony to end all symphonies,” wrote the Edinburgh International Festival.

“With its wit, its drama, and its visionary ‘Ode to Joy,’ Beethoven’s Ninth is a joyful hymn to friendship and goodwill, an anthem for all humanity,” it added.

A spokesman for the festival told The Telegraph that the Philadelphia Orchestra’s protocols “differ from current UK guidance.”

A spokesman for the Philadelphia Orchestra told The Epoch Times that the decision to cancel the performance “was not taken lightly” and said that a choir wearing masks was “in the best interest of health and safety.”

“While we understand that Scotland’s COVID protocols differ from ours, we felt this precaution was especially important at the very start of a long and complex tour. Our advisers at the University of Pennsylvania have shown that singing creates significantly wider and more distant spread of aerosols than speaking does, and that masks reduce this spread of aerosols, and therefore the risks, dramatically,” he added.

The Epoch Times has reported on studies that have shown that mask mandates are not linked to lower COVID-19 case rates or transmission.

On Tuesday, a watchdog group called Functional Government Initiative (FGI) announced that it suing the Biden administration for allegedly refusing to provide information on studies on the efficacy of cloth masks.

“The American people deserve to know how long HHS [U.S. Department of Health & Human Services] was sitting on this data, if they even reviewed studies before making their recommendations for mandated masks, and why they continued to promote cloth masks after they knew they didn’t work to stop the spread of COVID-19,” said FGI spokesman Pete McGinnis.