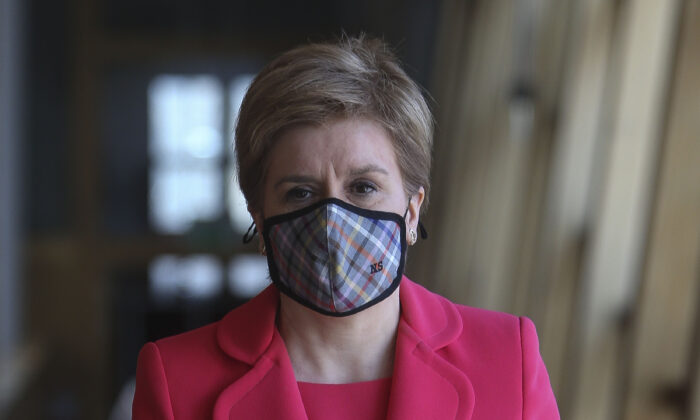 First Minister of Scotland Nicola Sturgeon attends the Scottish Parliament to give updates on changes to COVID-19 restrictions including the wearing of masks, in Edinburgh, Scotland, on March 30, 2022. (Fraser Bremner/Getty Images)
WORLD

Scotland has officially put an end to its mask mandates, marking the end of all legal COVID-19 virus restrictions in the region.

The legally enforced mask mandates moved into guidance on April 18, meaning people are no longer legally required to wear masks on public transport and in most indoor public spaces in Scotland.

But the Scottish National Party (SNP)-led administration is still strongly recommending that “face coverings continue to be worn where appropriate—including in indoor crowded spaces and on public transport.”

First Minister Nicola Sturgeon said on April 16 that she was confident most people will continue to wear masks after the rules ease.

“Wearing a face covering is a bit of protection you can give, not only to yourself but to the people you might be around—including people who might be more clinically vulnerable,” she told the PA news agency.

But on the same day, Sturgeon became one of the last individuals to fall foul of the rules, less than two days before they were set to expire.

The first minister was reported to police after a video posted on social media appeared to show her not wearing a mask during a visit to a barber in East Kilbride, South Lanarkshire.

Police Scotland confirmed it had received a complaint and said it was being assessed.

The SNP said Sturgeon was invited into the barbershop during an outdoor visit on the street.

A party spokesman said on April 17: “Within a few seconds, she realised she hadn’t put her mask back on and immediately put it on.”

But the opposition Scottish Conservatives accused Sturgeon of not “practicing what she preaches.”

Dr. Sandesh Gulhane, the party’s health spokesman said: “She’s happy virtue signalling for official photos but behind closed doors it’s clear she doesn’t believe in her own rules so why should anyone else.

“This is blatant hypocrisy from the first minister who has now shown her true colours. The public, who have been under these legal COVID restrictions for over two years, deserve an apology for this rule break.”

In addition to the end of the mask mandates, people without symptoms of the CCP (Chinese Communist Party) virus are no longer being asked to take regular lateral flow tests as of April 18.

Until the end of April, people with symptoms are still asked to isolate and get a PCR test.

From April 30, test sites will close and people with symptoms will no longer be advised that they need to seek a test.

The public health advice for people who feel unwell will be to stay at home until they feel better, to reduce the risk of infecting other people.