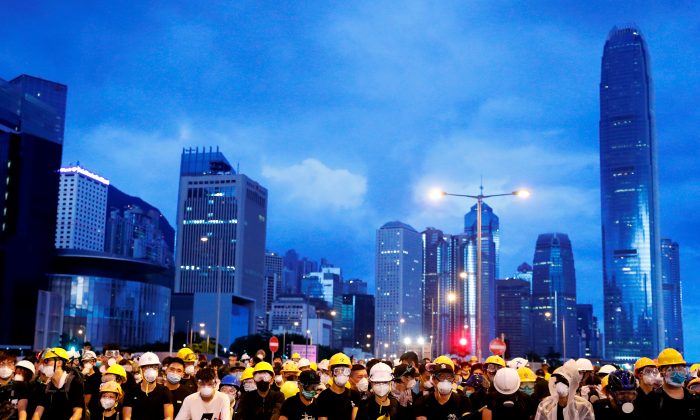 Anti-extradition bill protesters stand behind a barricade during a demonstration near a flag raising ceremony for the anniversary of Hong Kong handover to China in Hong Kong, China on July 1, 2019. (Tyrone Siu/Reuters)
Hong Kong

LONDON/BEIJING–British Foreign Secretary Jeremy Hunt said on July 4 that he had not backed violent protests in Hong Kong, after Chinese state media ratcheted up its criticism of the U.K. for defending the autonomy of its former colony.

Hundreds of protesters broke into the Hong Kong legislature on Monday after a demonstration marking the anniversary of the return to Chinese rule in 1997 under a “one country, two systems” formula that includes freedoms not enjoyed in mainland China, including the right to protest.

That followed weeks of protests against a now-suspended extradition bill that opponents say would undermine Hong Kong’s much-cherished rule of law and give Beijing powers to prosecute activists in mainland courts, which are controlled by the Communist Party.

The Chinese regime has stepped up a war of words with Britain over Hong Kong, especially after Hunt warned of consequences if China neglects commitments made when it took back Hong Kong to allow its way of life for at least 50 years.

State media in particular has blamed London, Washington and other Western capitals for offering support to the demonstrators.

Hunt, speaking to BBC radio, reiterated his condemnation of the violence.

“Let me be clear what I said. I said that I condemned, and we as the United Kingdom condemn, all violence and that people who supported the pro-democracy demonstrators would have been very dismayed by the scenes they saw,” said Hunt, who is vying to become Britain’s next prime minister.

The Chinese regime has said Britain has no more responsibility for Hong Kong. Britain says it still considers the Joint Declaration in 1984 on the terms of the return of Hong Kong, which guarantees its freedoms, to be valid.

“I don’t think it’s a big surprise that China would react that way but they need to understand that Britain is a country that honors its international obligations and what I was saying was something very uncontroversial, actually, which is that we signed an agreement in 1984 which lasts for 50 years and we would expect all sides to honor that agreement,” Hunt said.

“Hong Kong has an independent judiciary and it’s not for me as foreign secretary of the UK to second guess how that judiciary works. What I was saying was that there would be serious consequences if the legally binding international agreement between the UK and China, if that was violated.”

On Wednesday, British Prime Minister Theresa May also said China must respect the rights and freedoms of people in Hong Kong and that she had been in touch with Beijing to raise concerns.

Hunt warned on July 2 of consequences if China did not abide by the Sino-British Joint Declaration. His comments were met by a sharp rebuke from China’s ambassador to the UK, who told Britain to keep its hands off Hong Kong.

Widespread damage inside the Legislative Council building, where protesters smashed furniture and daubed graffiti over chamber walls, forced the government to close it for two weeks.

The Legislative Council Commission is due to hold a closed-door special meeting at an undisclosed venue later on July 4.